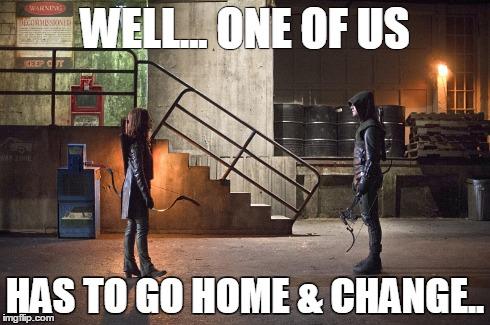 Another episode of Arrow, another copy cat archer. Yet again someone is going around busting out bows and putting arrows in folk as we saw last week. On the real you’d think the Mayor of Starling City would be trying to instruct stricter bow control.

Reporter: Mayor! Mayor! What are you doing about gun control in the city?
Mayor: Gun control? Fuck guns, ain’t nobody getting shot here anymore. I’ll tell you what we need to do. We need to get these arrows & bows under control. Shit crazy in these streets right now. I saw a drive by in the Glades last week with a house riddled with arrow heads. Sheeeeeit, Next thing you know cats going be robbing folk with boomerangs.

Anyway, as we saw last episode a we got another archer…yet again.

Somebody in these streets pushing arrow heads through bodies. We saw Grant’s ex-partner get it. So you know more are soon to follow.

Felicity is up at work and then sees Ray Palmer getting his work out on.

[divider type=”space_thin”]
For real? yall couldn’t have my man doing box jumps or something? We just going have him sampling from Ollie too? Word. Aiiiiiight. Ray tells Felicity he needs his help at a boring ass dinner (platonically) to close the deal with an investor. Felicity good company so he wants her with him. He brought out the Couture dress to seal the deal.
[divider type=”space_thin”]

Back at HQ Team Arrow trying to figure where this new archer plans to strike. Ollie is examining the spade shaped arrow the perp left behind. Felicity lets Ollie know she got shit to do with Palmer tonight (platonically). He had to put them feels in the quiver. Ollie goes MC Hammer on the spade arrow (literally) rushing it to reveal theres a note with an address in there. Ollie and maskless Diggle arrives to what looks like a scene out of a USA Up All night flick. Hearts are everywhere, candles lit up. Also… 4-5 candles I can understand but when you got a good 100 candles in the crib? Thats not a romantic mood you setting, thats a fucking sacrificial ritual. Ollie figures that it wasn’t a spade at the end of the arrow but a heart, he gets a call on a burner phone left there and its the new archer aptly named Cupid.

[divider type=”space_thin”]
She gives Ollie all the omega level class 5 clinger feels. She leaves a clue for the next target to the phone she left Ollie. The gang figures out she is subletting at one of Poison Ivy’s (or Pepper Pots if you follow Gotham) Greenhouse. Roy joins Ollie and gets snuck up on with the quickness. Roy feeling bad about that murder he did while on that mirakuru water… but that ain’t no excuse to get taken out by someone wielding hearts at the end of their arrows. I’m sorry you can’t be named Arsenal if you getting taking out my valentine themed villains. Where were was your unnecessary parkour motion in a fight move of the week to save you this time Roy?


[divider type=”space_thin”]
Ollie then finds Roy LAID OUT while Cupid has a mobster hanging by a rope with a bomb. She holding a velvet cup cake talking that stalker shit to Ollie. She then leaves homeboy hanging literally as she kicks the chair out from under him. Ollie shots dude down, then tosses his explosive vest into the air and hits it with an arrow saving everybody. Then punches the mobster out cold after saving him. He should’a saved that cupcake first and foremost.

Roy mad as fuck he got the sneaky hit of the week. More info gets found out about Cupid as she is ex police force and looks familiar. Ollie realizes he rescued her before, back when aye body and they grandma was on Mirakuru running amok in the city. He visits the therapist she had to see and she tells him, “Hey, she an omega level clinger like you wouldn’t believe b. She will burn yo shit down if you cross her homie. So don’t… that’ll be $700.00 dollars. I still charge by the minute, I don’t care if you a vigilante”.

Diggle let’s Felicity know that her going on a date with Ray making Oliie “FEEL SOME TYPE A WAAAAAAAAAAAY” Felicity gave him the straight up, “and?” face. Ollie got something to say he best bring his ass down here and say it. Felicity meets Ray for the dinner and she be wearing the hell out these dresses yall. I’m just saying, Smoak out here (no mixed signals {get it?}) for MVB. Most Valuable Bae of the YEAR! Then Palmer put a cool ten mill necklace on her since he knows she be singing “Diamonds round my neck” on blast in the car on her way to work.


[divider type=”space_thin”]
Felicity then has to cut the dinner short since Diggle reveals Ollie needs her help catching this villain. Felicity got the best job in the world, she stay having to to dip and being like, “ehhhh my fault”. She does put in a great word to the businessman why he should let Ray have his mine. “Ray aint trying to make money. He aint a business maaaaaaan. This dude right here? THIS SCIENTIST RIGHT HEUGH?!?!? He trying to better the world”

Felicity figures out some shit on one of the dudes that Cupid killed recently. He triangulated where Ollie’s hide out was. Cupid arrives at the Verdant club dressed for the red carpet. Ollie hits her cellie and gets her to clear house. They meet at the place where Ollie first saved her. Ollie goes into a monologue on why he has to be alone (even tho there is someone he wants), which Felicity over hears. Cupid who is a clear and present danger doesn’t like that answer and starts lettin them arrows fly. Ollie remembers he actually has 5 years & 3 seasons bow experience points over here and dodges her shit like he was playing super smash bros. then proceeds to go into close combat (even tho he had her ass dead to rights point blank with the bow but whatever…)

Man, Ollie had to fucking break his thumb to get them cuffs? He ain’t have an arrow for that shit? I ain’t breaking any finger for this vigilante shit if that was me. Fuuuuuck Thaaaaaaat. We come to find out that Ollie had Cupid placed with the Suicide Squad after the altercation. Ollie figures she could at least do some good there. Arrow then earns another point above gotham with their actually actions and concerns for villains with mental health issues. Diggle then tells Ollie he needs to go tell Felicity how he feels cause she over heard him and aint trying to be alone. (Ollie has a flash back to hong Kong where the agent he was staying with was thought to be dead by his wife when he aint check in. They went down to the docks and she gave everybody that swordplay work. They come to find out he was actually alive and waiting for them with their son back home).

Ollie rolls in to give Felicity the feels talk but he is too late as he sees “Mr. Steal Yo Company” Ray Palmer level up to “Mr. Kiss Yo Bae”.

Ollie is good tho he can surely handle this set back. He’ll play some Drake if it gets bad and maybe call up Ja Rule if shit gets dire but he’ll be fine.


[divider type=”space_thin”]
Roy hears Ollie moving furniture around and they both confess they aren’t okay. They then over to Diggle’s place (doing unnecessarry parkour movies off screen) to get some Mac & Cheese cause they just can’t win this season. Oh, but your boy Ray Palmer? Your boy Ray Palmer bout to be mining him some dwarf stars from that deal felicity helped him close, which means one thing as them Tron schematics pull up. The Atom almost here yall!!

Also some guy showed up merkin cats with boomerangs.

So you already know who up in this peace now