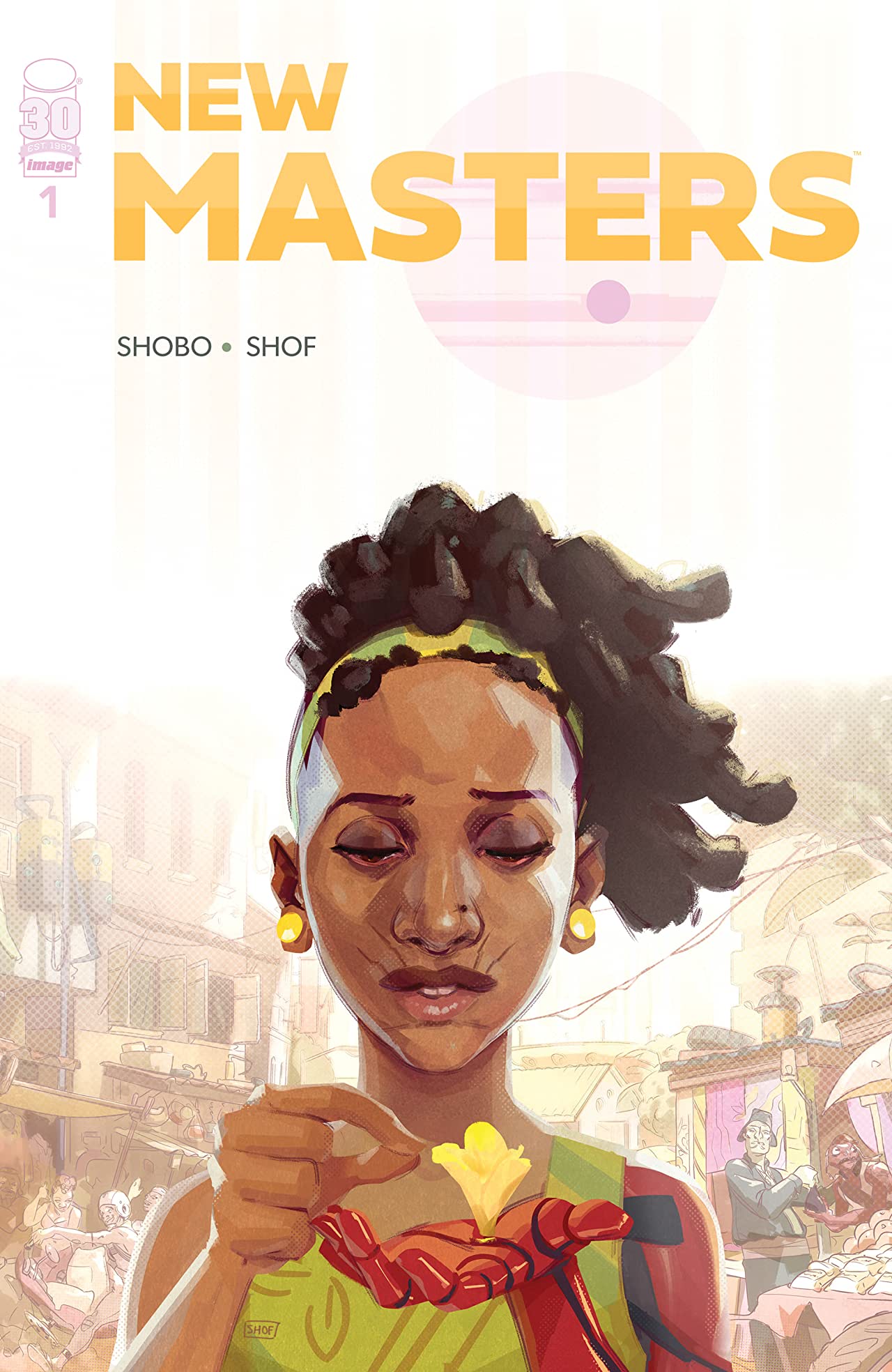 The very first moment that you open New Masters, you’re greeted with a vaguely familiar scene. A daring protagonist on their motorbike approaches some mysterious monument. I say vaguely familiar because there is something about Shof Coker’s artwork that makes the full page spread feel different than the usual sci-fi affair. As Ola descends into the Kainji Mines, deep in the Eko Exclusion Zone, we are treated to a visual spectacle of technological ruins. A very interesting stage is set for New Masters, even if some of the pieces of the universe don’t quite fall into place until later in the issue.

Set approximately eleven hundred years after “Adventu” (a monumental event that gets some exposition near the end of the issue), New Masters is an Afrofuturist comic that follows Ola in her attempt to make ends meet in a harsh world. A landscape full of aliens, strange technology, and more. Ola and her robotic companion Aṣẹ have wonderfully unique character designs that Shof illustrates perfectly. Ola’s badassery in reclaiming raw materials immediately resonates which pivots into an equally engaging second act. One where we see Ola making her way in the big city before the third act gets a bit exposition-heavy, showing some of the political wheeling and dealing of this world.

This is the second time that Nigerian brothers Shobo and Shof have worked together (their first endeavor being the Kickstarter comic Outcasts of Jupiter). It’s immediately obvious the two are passionate about the world they are building. They are incorporating different aspects of their culture: shared mythology, religion, history. It’s fitting then that Aṣẹ’s name stems from the Yoruba concept of ‘conceiving the power to affect change’, as the robotic companion affords Ola the confidence and knowledge to endeavor in the world. The variety of African influences is evident and aesthetically the book is a fantastic dictionary of Afrofuturist elements.

Shobo’s writing of individual scenes is great and we get a lot of ‘moments’: of tension, realization, and humor. The exposition is a little dense, even with the extended page and this first issue has a lot of dialogue. This is to expedite the staging of the ‘greater myth’ arc, but that is a recurring issue with limited series pilots. That said, there is plenty of intrigue and endearing character moments to offset the complaint.

New Masters #1 is an exciting introduction to the Post-Adventu world. There are lots of narrative threads to follow and Ola’s introduction is up there with the many great sci-fi rogues that have come before her. There’s a lot going on, but even so, the visual aesthetic is spectacular and the diligent care in world-building is obvious. You can tell that Shobo and Shof have worked incredibly hard to bring this epic to life, and I’m very curious to see what happens next.