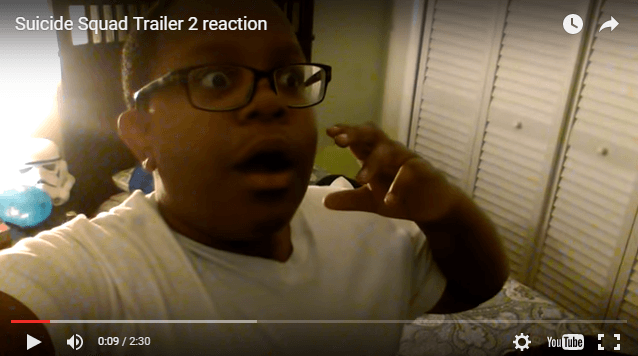 [divider type=”thin”]
The new trailer for Suicide Squad dropped last night so I sped to YouTube like my name was Barry Allen. I wanted to watch it again. I wanted to share it. I wanted to sing along to Queen and wig out like I didn’t do the first time because of my initial slack-jawed viewing. On the outside, I was drooling. On the inside, I was the boy I accidentally found in the search results instead of the new trailer. Though Warner Brothers hadn’t uploaded it immediately, AjhaniIsAwesome had uploaded his reaction; and with his wide eyed anticipation, his squeals of joy, his enthusiastic 5 second performance of Bohemian Rhapsody — it’s the best thing on the internet right now. Just watch the way he cradles his head in utter disbelief of what he is even witnessing right now. This is what GIFs are made of.

Like comic-film fans everywhere I’m eagerly anticipating this year’s offerings. 2016 is littered with characters from the comic cannon, but none so recognizable as the likes of Batman, Superman, and the Joker. I’ve liked, disliked, and plain dissed plenty of these characters’ incarnations, having seen dozens of versions over the years. When Ben Affleck became Batman and Jared Leto became my so-called Joker, it gave me pause. While further looks at Batman v Superman continued to underwhelm for a time, they straight up spoiled something with the trailer released during Jimmy Kimmel by revealing a major character that was previously unseen. The reveal felt like one of those moments that would blow my mind while watching the film but that now I’ll already know is coming.

The trailers for Suicide Squad feel markedly different, and have me amped to see that film. I didn’t expect that. I’m supposed to be more excited about Batman v Superman, right? I mean, I’m not religious or anything but…I bow down before the Trinity. Bruce Wayne da Gawd. Holy Dianna, Mother of Wonder. Kal-El: the Last Son, the Clark, the Super Man.

The reality of them in one movie should have me prostrate at the ticket window, instead I’m salivating over a team of up of “the worst of the worst” with the same unrestrained hype as the young man above. The cause of my lustful anticipation? Those tantalizing trailers!

The selection of their scenes. The choice of dialogue. Their score. Their slow build through introductions, to action, then a great final line. It’s spectacular. They lay all the groundwork, show me the characters, and tease loads of action, all without ever making me feel like I’ve seen too much. Quite frankly, they’re lit. Lit like the fire that must surely await me. I’ve turned my back on The Trinity. Amanda Waller said “you work for me now” in the first trailer, and even if she is the devil like Harley Quinn asks, all I want to know is… “When do I start?”