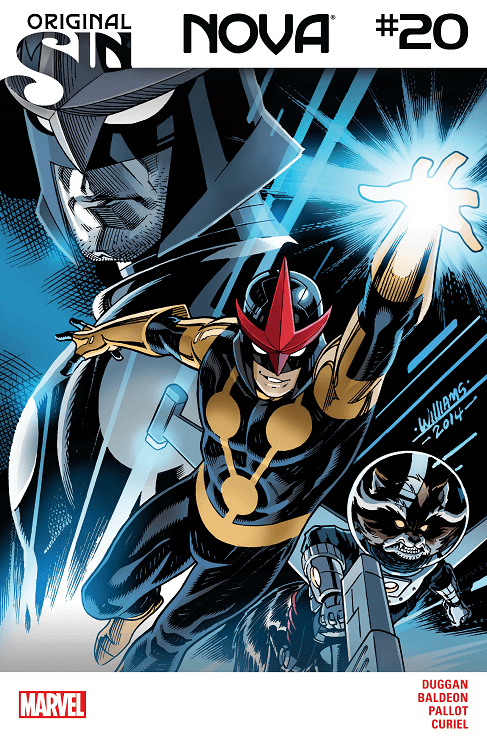 The hunt for Jesse Alexander continues for his son Sam Alexander. We saw last month that The Watcher secret bomb showed Sam his father’s actions of that enlisted him into the black nova corps. Actions that involved that cold blooded space murda music. Sam went to get answers from Adomox with his dad’s old pal Rocket Raccoon only to be poisoned. The only way to get the cure is to go and reprogram the black Nova helmet so that it works for Adomox.

Sam stumbles onto the space equivalent of the (ugh i hate to say it) Batcave his father had set up. After some exploring and questions the literary gawds of Deus Ex Machina provide some answers towards daddy’s black ops that Sam has been looking for.

The conclusion has another special guest appear (who also had two cameos in the Guardians of the Galaxy movie) to help Sam and Rocket out. We see how cunning Sam can be when he starts playing strategist, when the Nova helmet isn’t an option.He’s a terrible shot tho. There is also a look at the whereabouts to where Jesse Alexander has been. Homeboy is stuck reenacting Planet Hulk meets gladiator on some planet.

Things are picking up in Nova and hopefully the retrieval of Jesse Alexander is upon us next month. exciting times folks.