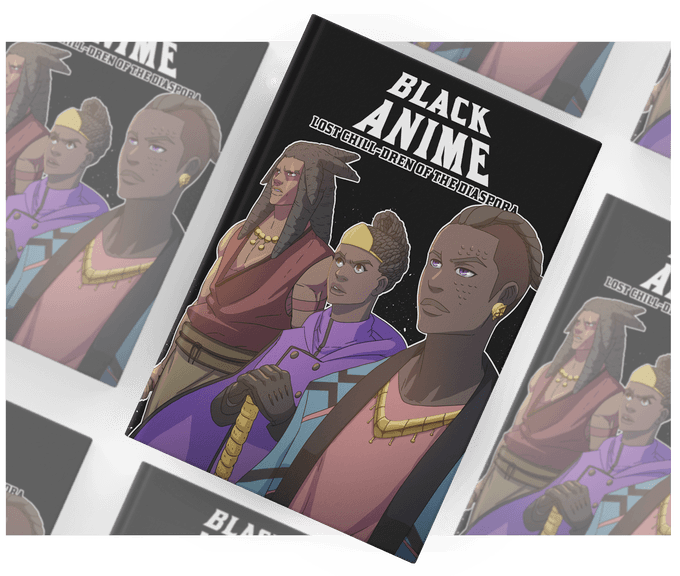 I know Mike Toney from his amazing Instagram account, which you should totally follow by the way. Black Nerd Problems has reposted his art time and time again.

Toney started doing client work in 2016, and two short years later he was tapped to do freelance character design for Cartoon Network and promotional work for Marvel Studios’ Black Panther (2018). He attributes this rapid ascension to his commitment to drawing every single day, no matter what. But overall, he’s most proud of his conscious decision to make characters of color that everyone can enjoy.

He’s currently working on a Kickstarter campaign to crowdfund a very important project close to his heart. One that means so much to him: Black Anime: Lost Chill-dren of the Diaspora. A 94-page art book spanning two years of his personal work, this art book is inspired by ancient mythology and the African diaspora.

“I determined that all of my characters and stories would draw from African mythology and the African diaspora.”- Mikey Toney

Art Director and illustrator  Mike Toney is a lifelong lover of anime—beginning with faves like Escaflowne, Tenchi Muyo!, and Yu Yu Hakusho. Black Anime: Lost Chill-dren of the Diaspora is a collection of his work between 2016-2018, but the inspiration for the project came from his childhood art. Growing up, Toney never drew Black heroes because he never saw them in the series he loved. In the video on the Kickstarter page, he mentions a memory of being young and his father questioning him: why didn’t he draw people who look like him? In 2015, he vowed to change that and focused on creating Black characters and began drawing from African lore and themes.

Originally published earlier this year as a digital-only artbook, which BNP was sent some months ago, this KS campaign is to raise funds to get (soft and hardcover) print copies into the hands of the people, along with other great reward tiers such as posters, autographed copies, and even special commissioned art pieces.

Having the digital copy on hand, I was able to open up and explore Toney’s collection and all this hard work. The book is split into 4 sections: original characters, future stories, fan-art, and growth. I’m a big fan of the design of the book which could very well be contributed to Jordan Martins who not only wrote Toney’s bio but edited this entire book. I really love the clean layout of pages that features Toney’s art alongside names of characters and even captions with a bit of who they are. Toney’s own words are: “Learn more about the lore and background of some of my creations” which is an eye-opener for me any day ending in -y as I love to get an idea of who characters are and their motivations, even if it is just a sentence or two.

There’s a myriad of different characters in all shades and hues and body types. There are griots, cyborgs, spirit detectives, gods and even zombies. To quote Toney: “All the characters themselves are just as diverse and different as the different types of black people all over the world. Which I felt like I didn’t see.” Melody the Lightbringer, who can be found on pages 56 and 57, is probably my favorite with her dark skin, intricately braided pompadour and a sword that is the lovechild of Cloud Strife’s iconic Buster Sword and some legendary Pokemon’s electric rage. Her caption tells us that she’s from an important family and “she’s been groomed to wield Azimo, a blunt sword that houses a very special secret.” Also worth noting: I was really happy to open up this one and pour over it and blissfully not see any of the art of the female characters in the classic T & A poses which often makes me roll my eyes looking at digital art online, especially from male artists.

On the KS page, Toney relates that while this is his first art book, it is his second time releasing a Kickstarter, so he’s familiar with some of the basic challenges with maintaining a project. That should be a relief to newer fans of his who are worried about him being new to the game on using the massive crowding platform.

Black Anime: Lost Chill-dren of the Diaspora is heavily influenced by Japanese manga and anime via how Toney’s art styles have developed but this special project is uniquely one that features people who look like him, like me, and probably even you. Black Anime: Lost Chill-dren of the Diaspora belongs to the African diaspora as much as it does African mythology and it is even better for it.

I wanted to end this with a quote from one of the last pages of the digital art book copy I read: “My goal is to continue to grow and create art deserving of your support. I hope my progress as an artist inspires you. Don’t forget to draw everyday.” It is Toney’s way to expressing his appreciation of the fans who love his art along with a simple but very immediate reminder to keep drawing, keep improving, and keep at your craft for those who need that word.

Check out Black Anime: Lost Chill-dren of the Diaspora by Michael Toney on @Kickstarter https://t.co/WndxizvqTH