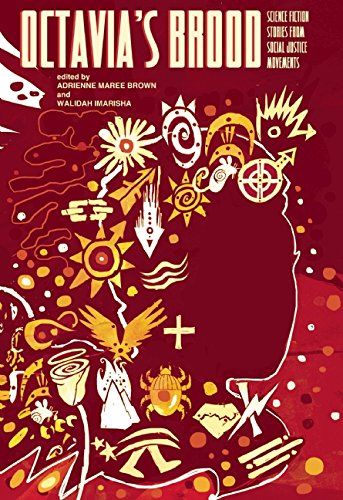 I was a little late to the party on Octavia’s Brood, not finding out about it until well after the IndieGoGo campaign had closed, but that doesn’t mean I can’t enjoy this anthology that so many people contributed to. (Thank you all!) The premise — Speculative Fiction with a Social Justice mindset — is so appropriate, so right now, I had to read it.

The title is in honor of Octavia Butler and her trilogy, Lilith’s Brood. Butler has immense influence on the field of speculative fiction, especially as a Black woman author writing well before there was even the barest institutional support for her writing. Butler wrote in worlds that were both evocative and original, and in terms that imagined a world where social justice for marginalized people was not only possible, but inevitable.

These writers and their characters are consciously Octavia’s descendants, and for my part I think Butler would be damn proud. Every story has at its core a revolution, a revolution for people of color, for the poor, the physically disabled, the mentally ill, and others of us who land at intersections of all of the above. Many of the authors are themselves first-time writers, coming from backgrounds in social justice advocacy and the like. This makes for a book that takes the importance of diverse books as an assumption and that utterly crushes any remnants of the centrality of white, able-bodied, CIS-gendered males in speculative fiction. The editors, adrienne maree brown and Walidah Imarisha go on to define a new area of speculative fiction — visionary fiction. From the website:

“visionary fiction pulls from real life experience, inequalities and movement building to create innovative ways of understanding the world around us, paint visions of new worlds that could be, and teach us new ways of interacting with one another.”

The short stories in this anthology vary in every way — tone, topic, main character, length — no two are alike. Many take as their starting point a pivotal decision in the main character’s life, that moment when they step off the cliff of their safe, if oppressed and unsatisfying, life and embrace change and revolution for themselves and their communities. Short stories are built on tension and this approach pays dividends in drawing the reader in. However, it usually meant that the story was ending just as the tale of the character’s life was beginning to get interesting. I found myself immediately invested in the character’s lives only to then be left hanging as the story ended without firm resolution. I want to know more, dig deeper, revel in the revolution each character is about to be swept up in. But that wasn’t to be in this anthology, maybe in the next volume.

I can particularly recommend Revolution Shuffle by Boa Phi and Small and Brown by Autumn Brown as my two favorites of the anthology. Revolution Shuffle is gripping, imagining a future America and the folks who refuse to accept their assigned place within it. Small and Brown turns the world upside down, with the remnants of the future Earth having gone underground — literally. It is a story about motherhood and separation, beautiful done. The book also includes fiction from famous people like Lavar Burton, and essays from Mumia Abu-Jamal and Tananarive Due. You leave this book feeling inspired and educated. As with any anthology premised on the future, some of the stories are not only allegories but slightly heavy-handed ones at that. That’s not my favorite approach to speculative fiction, but there weren’t enough of them to take away from my enjoyment of the whole. 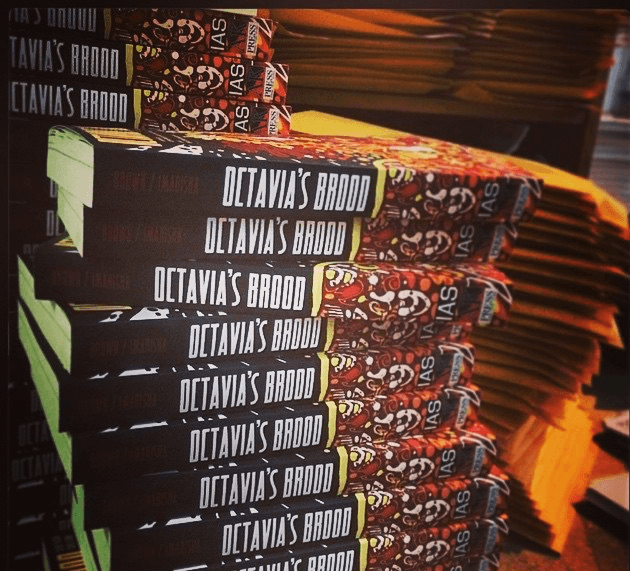 This is afrofuturism at its finest — future stories that suggest a better world for all of us and that challenges speculative fiction to be the prophet of the future it can be. You can buy Octavia’s Brood electronically or physically through all your favorite channels. Unless you’ve already read it. Have you? Do you have a favorite short story from the anthology? Share it with me. I’d like to hear what you think.