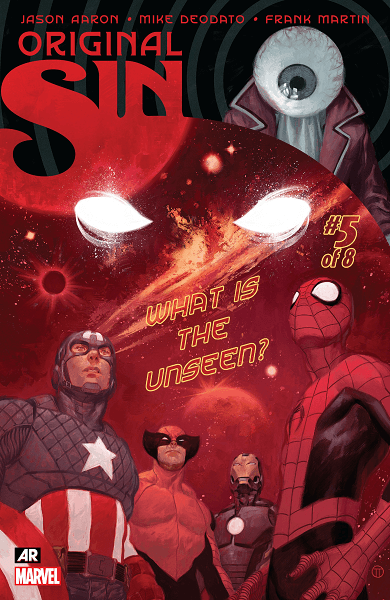 We got a better installment of Original Sin as the title began to fit into the context of this book more. Learning all of Nick Fury’s deep dark secrets is, ya know, one way to go. This wasn’t a bad issue by any stretch and it was definitely interesting, but I’m not sure how good this book actually is. Most of the silliness was tampered down from previous issues (well, minus the insect-like aliens discussing humans as a delicacy…never seen that before…). Still, regardless of how invested you are in the character of Nick Fury you are as a comics fan, the aspect of him monster killing as his Friday gig is both fun and ridiculous, depending on your current mood.

Fury takes up the whole book, this time around, so there’s no room for the other characters or to really dive into where the Watcher’s death factors in. Again, cool back story, but not much movement on the story at present. For someone that who was already wobbling on this story line, it did more to pull me in that it did to push me away…but I’m still not all that invested.

We have three more issues of this big event so we’ll see how things come to some resolution (possibly). This was probably the best issue of the event since it began, but we didn’t really get any answers for our efforts either.