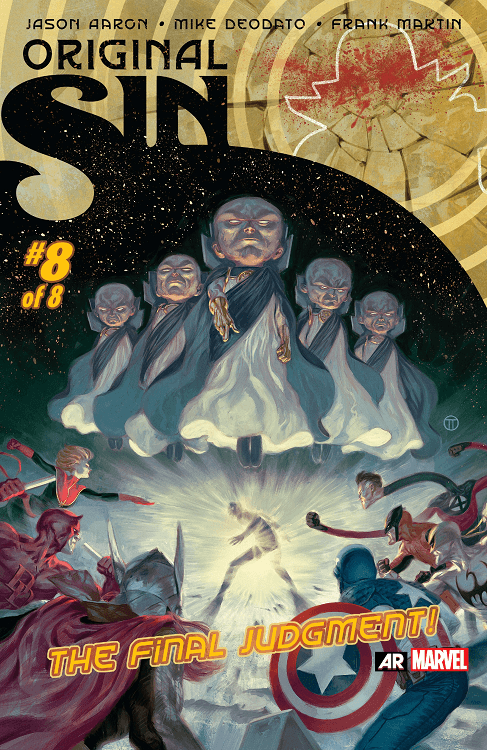 I don’t read Jason Aaron’s Thor: God of Thunder, but not because I don’t want to, but simply because of how thick my current pull list is. I haven’t heard any review or commentary to suggest that it hasn’t been a very good to great ongoing series. I also plan to check in for the last few issues leading into the big change of Thor as I’m intrigued as everyone else to see how it plays out. I say all that to say, that by all accounts, Aaron does good work. I have no idea what happened in Original Sin though. The ending of this crossover feels more like a mercy kill than it does a triumphant victory lap. With such a promising premise laid out, I’m not exactly sure where this book went so wrong, but it kind of did, go so wrong. Maybe it was the overestimation that readers would care THIS much about Nick Fury or the weird imbalance of seriousness versus humor or the cartoonish and (unintentional?) ridiculousness of the Watcher’s eyes as actual, physical weapons. The things I did enjoy about the series in the beginning, such as the odd team ups and interactions, dissipated pretty quickly around the halfway point. Suddenly, our favorite characters were relegated to beating up LMDs or putting on space suits. Little actually changed in the Marvel Universe as a result of such a cataclysmic event as well, unless you count the intentional lead-in of Thor losing the power to wield Mjolnir (to which we don’t figure out why as I’m sure its saved for the God of Thunder book).

Overall, it was tough sledding getting through a book that could’ve/should’ve been a delight. One thing that was great all along was the art and its execution. Except when the script dictated something utterly ridiculous like the Orb rocking one of the Watcher’s eyes on his chest. But, overall, it was at least pleasant to look at.

Original Sin’s main story line is over, which is decent news for all of us, including you all who have read me complain about it for the last few months. Small changes seem to be coming out of it, but one hopes those will blossom into making this series more relevant, after the fact.