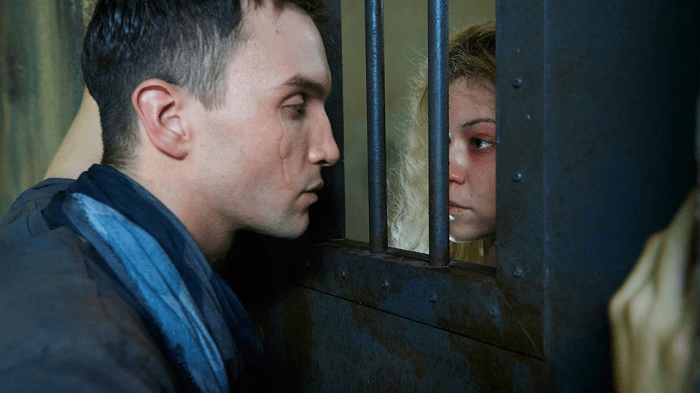 Off rip, there’s a world and a place, where ain’t nothing sexier than Sarah and Fee dumping a dead fuckboy clone in a bathtub with their sleeves rolled up and in some painting smocks. I don’t know if that world is this one, but still…

Our favorite foster siblings are trying to figure out how to get rid of a dead body because these cats never seen Hannibal or Snatch, even when they were living in Britain. Of course, their movie collection is pretty low priority at the moment because Art decided to get back in the Clone Game and has come to pay Sarah a visit. Yo, I know Art and Sarah have been through some shit, and you can add one whatever on top of that because of his partnership with Beth, but how you gonna walk up in the spot where a dead body is at and be like, “Damn, this is real inconvenient Sarah.”

They conference call in Cosima and Scott while discussing that the fuckboy clones need the original genomes to not come down with that falling sickness. Art and Sarah got a lead on Mark and try to track him down.

Meanwhile, Mark up in the motel with the cloth wonder woman bracelet on his forearm while Gracie out on the town. He panics for a second till Gracie comes back with some Saks Fifth bags and some pastries from Little Italy while Mark freaking the fuck out. It ain’t Gracie’s fault, she had to leave the house before anyone told her the difference between being on your honeymoon and being on the lamb.

Alison and Donnie are out in the park pushing that WMD for the Barksdale crew and trying to get those Clay Davis votes. Price of soap going up in these streets and muthafuckas need all the lavender drops they can get their hands on. Right now, Alison more popular with suburban White Women for votes than Hilary Rodham.

Mark finally consumates the faux-marriage with Gracie AND THEN wants to tell her the truth. Conquests always make punkass dudes real forthcoming. He drops that hot 16 on Gracie about how he was actually just trying to grab some shit from her father. Gracie went Jon Snow on the inside knowledge and claimed she don’t know shit before running away…to the bathroom.

Art is on the stakeout with Sarah and he keep catching those Beth flashbacks every time Sarah move. The midwife got a new gig throwing shit away behind buildings and SarahArt run up on her. Ex-Midwife gives some intel on mark, but then tells Sarah that Helena got that Lord of Light gestating in her. She got some parting words about Helena and Sarah gotta bottom-rung wife on notice.

Gracie come out the bathroom looking like a young girl that’s carrying a baby with DNA from a clone and her own father…aiight then.

The plan is for Gracie to go to Willard and get him to give her the shit he hid from her father. Yeah…well Willard seems like he’s wants to give Gracie more than that. I mean, there’s creepy old dude and then there’s creepy old dude in a barn surrounded by hanging metal shit and a confederate flag in the background. He tries to tax Gracie for the lockbox, but Gracie acting badass for two these days.

Art and Sarah are still on Mark’s trail when Art start emptying his manbag all over the backseat. He says he’s rolling with Sarah on this because she’s Beth’s sister and waxes poetically about the last time he spoke with her. You know some shit was real when Art start whispering and shit and Sarah looking at him like,

We finally get some that murda muzik clone and see Helena in her cell. Rudy finally reaches the compound and Den Mother welcomes him home, proper.

Den Mother ain’t happy that Rudy put two in Seth’s chest and left him in a dirty ass loft hallway, but he didn’t really have a choice. Paul and Den Mother chop it up and they are on a real short leash with the “program” so he gotta go away and make things right.

Back at Felix’s apartment, Cosima ain’t had this much fun since 3rd grade biology class. She taking a hacksaw to fuckboy clone, but Scottie ain’t doing so well. Cosima Da Fictional Bae is smart enough to know all the parts of the human clone brain, but not enough to pull her locks back in a ponytail when she up to her elbows in blood. It’s ok, YOU STILL THE MVP COSIMA!

Welcome back Deadshot Rachel? Sarah basically stabbed her in the eye and took one half of her swag. She working on her speech therapy when she learns that the Rachel Duncan as the world knows it, is dead.

Den Mother clears the room and Rudy breaks down in front of her while basically trying to crawl back into a testube womb. She looking like she flipped a coin in her head to strangle dude on the spot.

Alison is still on the grind, trying to take over all of West Baltimore with her soap game. She got these fiends rolling up on her corners like Bubbles with the crack viles on the bottom of their Louis Vuitton’s. Marcy walks up in the lab while they’re making soap, Fight Club style. She comes by trying to buy off Alison with a house, but then tells Marcy to “go sell a house” which is BBC for

Art and Sarah finally make it to Willard’s spot out in Americans for Prosperity land. Willard tells Art that he’s a long way from home, “Son.” Art tells him, funny, I don’t look like a racist backwoods piece of shit, so I can’t be your son. They press him on his ties to the Proletheans and Willard tells them that Gracie came by. Then Willard drops some grade A sexism on Sarah before they leave. Too bad Felix wasn’t with them cuz dude really was set up well for the trifecta.

Back at the Heartbreak Motel, Mark breaks open the lockbox and realizes that Willard played her like all the tall kids in junior high played pitcher. Mark is FED UP and decides to go back and talk to Willard him damn self.

Sarah and Art in the diner and Sarah knows there’s another Timberland that hasn’t dropped yet. Art admits that he was in love with Beth, though we don’t know if Art and Beth did the clone curtsy one time or another or if he was just admiring from afar.

Inside the compound, Rudy walks up on Helena and determines that actually, HE is the ugly brother. Rudy tries to get in Helena’s head, but yo, that’s a crowded place, fam. Paul comes down and puts Rudy in check, but not before Helena hit him with that Ryu combo, one time.

Paul tries to apologize, but Helena basically lets him know they better NEVER let her get free.

Sarah is about to leave the diner when she sees the Prolethean Princess sitting by herself ordering some sorrow with a side of regret. Sarah ain’t here for this soft shit and gives her the real rap raw on the fuckboy clones, including her new new till death do us, Mark. She gets Gracie to tell her where Mark went.

And now, for our FOURTH trip to Willard’s crib, which seems ya know, excessive for a dude we didn’t know existed before this episode started. Mark giving Willard the high hammer for information while Gracie trying to pack up and leave. Then Ma Dukes shows up at the motel still looking as crazy as she did a season ago. She acting like she there to rescue Gracie, but she look like she might sew Gracie communicator up right then and there.

In the lab, Cosima and her bloodless locks are discussing their findings with Scott. Cosima calls up Sarah as she enters the workshop of horrors and tells Sarah that the fuckboy clones are their brothers. Brestras, my people.

Sarah finds Willard with his heart exploded in his chest because Mark ain’t great at this interrogation thing. Sarah lets Mark know that Gracie knows that everybody knows their clones, fam. Speaking of fam, Sarah tells Mark that they are kin but Mark ain’t trying to hear that shit.

Mark is running for the truck to get back to Gracie but Queen Prolethean got a hunting rifle, zero fucks and a different plan in store.

She out here hunting fuckboys and it is OPEN SEASON. Cue the gunshot, the distant shot of the wheatfield and the birds scattering like they ain’t sign up for this shit.