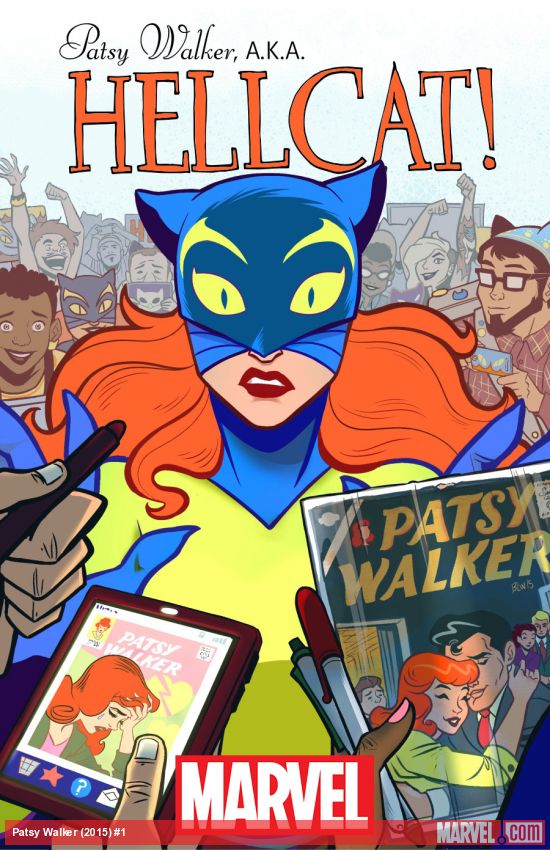 Before we get into this I gotta do a little backstory on how we at Black Nerd Problems go about singing up for new comic book releases to review. It’s so savage we make Congress look organized. I had one staff member slaaaaandering my name for dibs on this title because we were all really excited about this book. Now I won’t name names on who was doing the slandering (JORDAN M. CALHOUN), but this book is a big deal for us here, especially after seeing Patsy on Jessica Jones. I’ve been familiar with her from her appearances in the Marvel Divas series and know how great Patsy is as a character, and if I were a better person I woulda handed it over… but I’m not, sooo…

Fresh off her real upper-middle class White woman raw rap appearance on Jessica Jones, Patricia Walker aka Hellcat aka Pen Game MLA Format is done riding the pine in Marvel’s limbo and moves back in the spotlight with her new series. I gotta say the panel game is looking good with Patsy back in the wheel. Kate Leth does an incredible job of giving us the rundown on what’s been happening with Patsy, as well as introducing her supporting cast. She-Hulk appears and I had to Birdman hand rub ’cause this ’bout to be my shit right here, boi. Leth’s approach with Patsy isn’t the typical superhero formula either.

We’re going to see Patsy do some social work for people with abilities in order to integrate them into the work force. This really surprised me and opens up a lot of avenues of social commentary on trying to get work. This all starts as Patsy foils The Telekinian (Ian Soo) from robbing an armored car… or so it seems. We then see Patsy talking with Ian and hearing how he came to use his powers for crime instead of trying to be a hero, or at least for good. Leth has Patsy as the type of hero who is more willing to talk things out with people as opposed to just hitting people to solve the issue at hand, which will make for great character development down the line.

Leth also has a lot of Patsy’s past come up, as well as those recurring characters from her previous series, and through the art work of Brittney Williams we see their old look and their new modern-updated ones — and it is flawless. Williams is able to capture multiple sides of Patsy in her art. We see Patsy (always with a carefree demeanor) look regular, but then depending on the action or situation — especially when she is in her costume — we see Patsy looking more cartoonish, and not in a bad way. It might be a hit-or-miss for some, but for me it’s dead on, and it serves as a distinct signature look for this book.

Williams’ character structuring, environments, as well as the detail and running gags make this such a joy to read. Also, MY ABSOLUTE FAVORITE THING is that this is Patsy’s character from Jessica Jones in terms of personality, but economically her circumstances are different from that incarnation and from when we last saw her success over in Marvel Divas. I won’t stress on what that change is, but for me that made the character more relatable, especially living in New York. It feels like art imitating life superbly.

Y’all need this book in your life, man. It’s new, fun, and has a unique cast and approach, plus some great running pop culture references and gags. This creative team really did a great number putting Patsy out there for the peoples in a new light, but with that same Devil May Care approach that’s made her an underrated fave for years. Also, I knew I should be one reviewing this because there’s a scene where Patsy and She-Hulk are at a bar AT THE EXACT ADDRESS WHERE I WORK AT IN BROOKLYN AND MY WINDOW IS DIRECTLY ACROSS FROM THAT RESTAURANT WHICH HAS TO BE Superfine! COME AWWWWWWN, PATSY! PATSY!