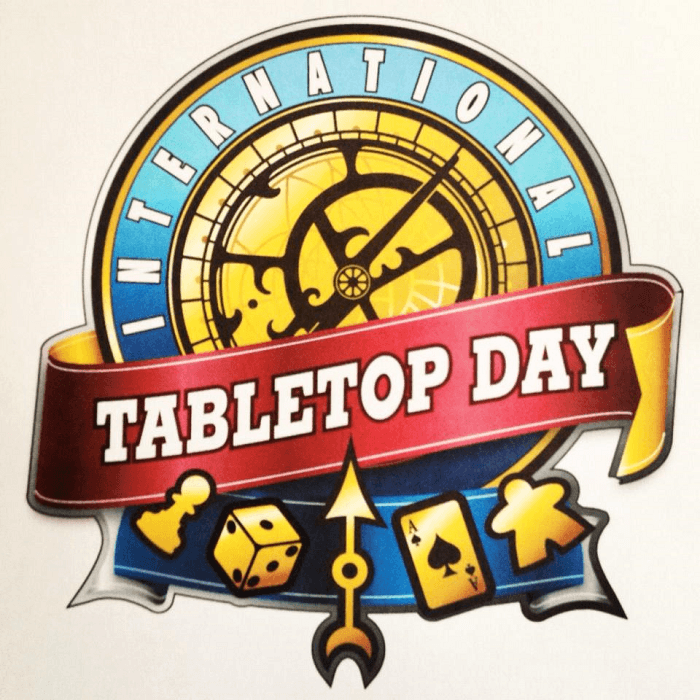 Back in the day, before all of my friends lived in my phone and I only talked to my mother-in-law via Facebook, I played a fair amount of tabletop board games. You remember those? They have dice and little markers? And you play them in person, in “real space”? When I was a kid, board games consisted mostly of Monopoly (which we played every Christmas) and Parcheesi (which my Dad still beats me at). Board games have definitely progressed since then, and International Tabletop Game Day on April 11 is in celebration of that. International Tabletop Game Day is a day of gaming events throughout North America and Europe where people get together to play their favorite games in person. Crazy. Game stores host game-a-thons, cafes hold open gaming events, even libraries get in on the act. Me, I’m going to a friends to relax with a cold beverage and a few of my favorite games. Here are a few of my current favorites. Collect some friends and give them a try.

The Classic: Settlers of Catan

Play this one with caution: I’ve seen friendships end over a game of Settlers of Catan. In this game, you build out the board at random, which is made up of five different zones: forests, plains, mountains, fields, and hills, each of which supplies a different resource. The point of the game is to control these resources by building roads and towns. You then grow your towns into cities and eventually control more of the map than the other players. It is heartlessly cutthroat and a blast to play. Dedicate a good amount of time to play this game, especially if you’re playing with any of the expansion sets. There’s a lot of strategy to be considered and the pendulum of victory and defeat can swing quickly. There are a ton of Settlers variations, including a two-player card game (my personal favorite), so if you like the original, there’s plenty to keep you busy.

The Hotness in Superhero-Themed Games: Sentinels of the Multiverse


[divider type=”space_thin”]
I first heard of this one from a friend, who was pushing it so relentlessly he’s since been added to one of the cards. Sentinels of the Multiverse is a different kind of card game. It is a cooperative game set in a comic book world. Each player has a superhero with varying skills. The Heroes are exactly as diverse as you want them to be, covering ethnic groups and mythologies that are often left out of many games. Together the Heroes face a randomly chosen Villain, who comes with environmental dangers and henchmen. The basic set starts you with 10 Heroes and 4 Villains, but there are enough expansions to keep you spending your money. This game isn’t for beginners, and a fair amount of basic math is required, but the fun of teaming up with your friends to beat down Villains with names like The Ennead or Akash’bhuta is worth the extra effort.

Not Your Brother’s Dungeons and Dragons: Lords of Waterdeep

This board game is set in a Dungeons and Dragons world, but don’t let that stop you from picking it up — this is my current favorite board game. Gameplay consists of players taking turns accumulating workers (represented by little colored blocks) and using those workers to complete quests. Completed quests give you victory points. The player with the most victory points after 8 rounds wins. Player vs. Player conflict in the game is as much or as little as the players want, a factor that I really like. I also like that there is a delineated number of rounds of play — no endless Monopoly games here. This game scales well in size. I’ve had just as much fun playing with just one friend as I’ve had playing with 5 players. The generic “fantasy” nature of the quests and activities add visual interest to the cards and give the game plenty of variety. This is a great game to play after dinner with friends and still have a high chance of keeping them as friends after you win.

I received this game as a gift for Christmas and have only had a chance to play it once or twice. I include it here because of its simplicity. This game is accessible to players as young as 8 or 9. It plays out as sort of a reverse-poker game, where each player has a hand that is visible to everyone but themselves. The players then strategize putting together a “firework show” before time runs out, built out of their collective hands in color and number order. I enjoyed it and it comes highly-recommended by other gamers I know. If you’re looking for something you can play right out of the box without having to read a 10-page rulebook, this maybe the one for you.


[divider type=”space_thin”]
You know this one. It is the Big Dog in card games right now because of its careful balance of humor and vulgarity. This isn’t a game to play with your mom, for sure. It isn’t even good for a date night with someone you recently met. To play, each person takes turns as the Judge, who plays a card with a blank space. The other people choose from their hands the card that best fills that space. The Judge then decides who wins based on their own criteria: funny? gross? ironic? non-sensical? Knowing the Judge is key and makes for an hysterical game. Cards Against Humanity has gotten some heat for saying things that just shouldn’t be said. But to their credit, the creators are constantly innovating the game and bringing out new cards, designed to right their past errors and yet keep bringing their adult humor to the masses. Plus, you can download the entire game for free. Yep, FREE. You can download the game, print it only your own paper, cut out the cards, and play. Every deck includes blank cards, so you can tailor your rudeness to your own private jokes and sense of humor. If you’ve got a pretty thick skin and a tolerance for dirty, then this is the game to try. It is designed to be played with your best friends, people you can be gross and horrible and rude with and who will still respect you. Or at least if they don’t respect you; they’ll definitely know you better.

There’s still time for you to get your game on. Try the International Tabletop Game Day website for local events. Or set up your own night. My dad might even come by and beat you at Parcheesi. I’ll be playing Lords of Waterdeep and as the night gets late, probably some Cards Against Humanity. Do you have a recommendation for what to play on April 11? Tell me about it in the Comments or through your social media of choice.

I’m also on the look out for games designed by People of Color, so if you’ve got some recommendations, let me know!