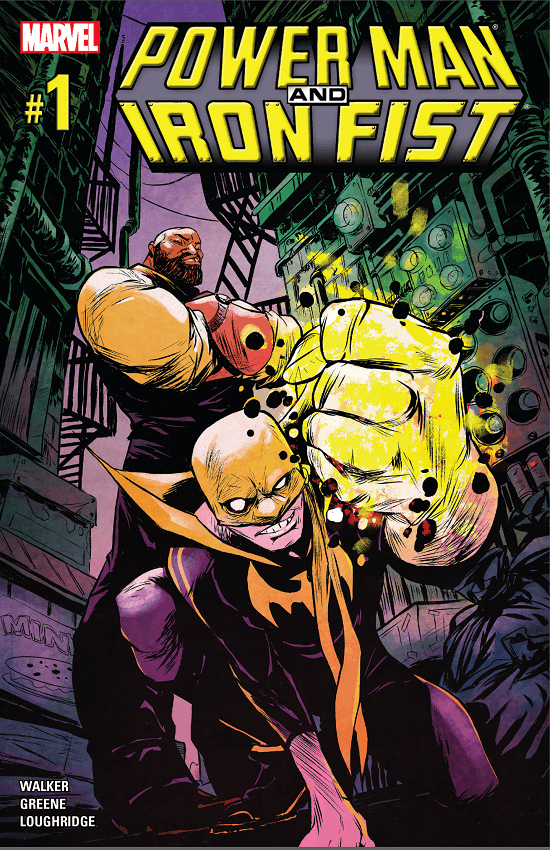 Riding high off of his ascendance to DC where he has been heralded for his revival of Cyborg, Walker is now taking on one of Marvel’s most popular Black characters in Luke Cage along with Danny Rand. Given the success and visibility of Walker over the last year so with Cyborg, but also his brief run on Shaft, there are a lot of eyeballs on this particular book; especially with Luke Cage’s popularity growing towards A-Tier levels with his inclusion in the previous Mighty Avengers books from Al Ewing and, of course, his appearance on Jessica Jones and the forthcoming series on Netflix.

The pairing of Cage and Rand as partners is a throwback like just about everything else in this first issue. This isn’t so much a rebooted storyline that happens to incorporate these two characters; this is more of a direct sequel to the old Heroes for Hire days, with plenty of little heard from and old school characters. You can tell early on that Walker’s aim is to draw the odd-couple/buddy-cops feel between Luke and Danny by making them often at odds about everything (which is true to form). Iron Fist is upbeat, talkative, and eternally optimistic. Power Man is cautious, guarded and perfectly fine with silence that never gets its due in Danny’s presence.

The stories centers not on the rejoining of the partnership, but the two heroes retrieving an old friend from prison (another flashback character). She asks them to help her with something, for which Luke is skeptical about, but Danny couldn’t care less about the details as long as he’s helping “family.” It goes about how you would expect and immediately sets up the first story in this arc as even more infamous blasts from the past enter the picture, sure to complicate things for our heroes down the line.

There will be plenty of cool action with these two of course, but this book is putting its claim on the dynamic between the heroes themselves. In issue 1, it works about 80% of the time. Danny’s exuberance and Luke’s annoyance of it will be enough more times than not in this run. There’s a funny bit about Luke not cursing anymore on Jessica’s insistence, which leads to Danny teasing him about it, but the joke goes a little long and just becomes self-referential too quickly. There are other moments when I expected a little more of the dialogue to shine in ways that has in Walker’s previous books, but nothing “fails” per se, and if anything makes the book pretty streamlined in its narrative. 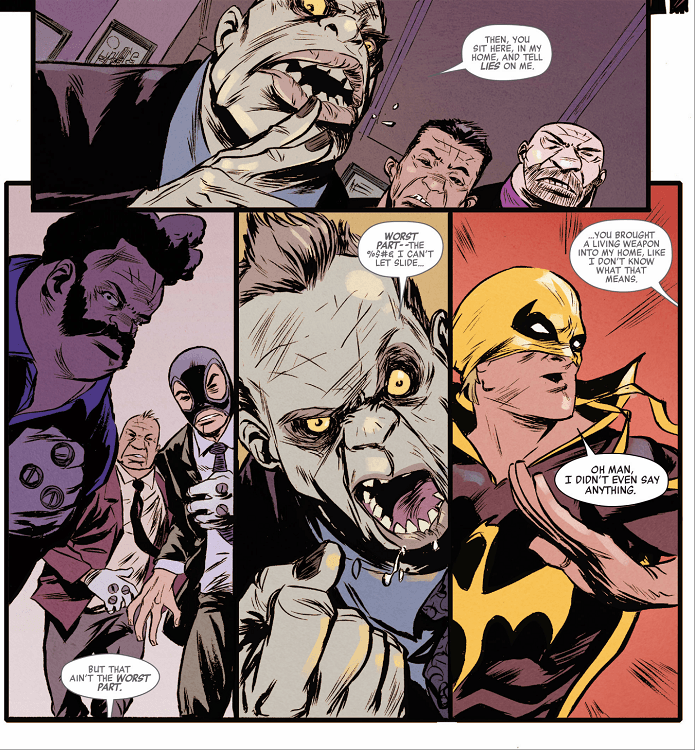 The art is about in the same boat, working a large majority of the time. I didn’t know how I felt about Luke’s completely larger-than-life profile in this book, with arms that are about as wide as Danny is himself, but midway through the book it had grown on me and I felt like it was succeeding. Especially as the writing informs the attitudes that Greene has the job of displaying. The art is also aided by who I feel is one of the best color artists in the game in Lee Loughridge. He sets a great tone for this book. I especially loved his use of dark shading when the conflict occurs, showing the treacherous ground that our heroes find themselves in.

Overall, the first issue of Power Man and Iron Fist is solid; good in some spots, a little flat in others. Ultimately, this book will hinge on the ways that Walker can bring the friendship of Luke and Danny to an enjoyable spectacle, which I have a lot of confidence in him doing.

8.1 Non-Talking Living Weapons out of 10