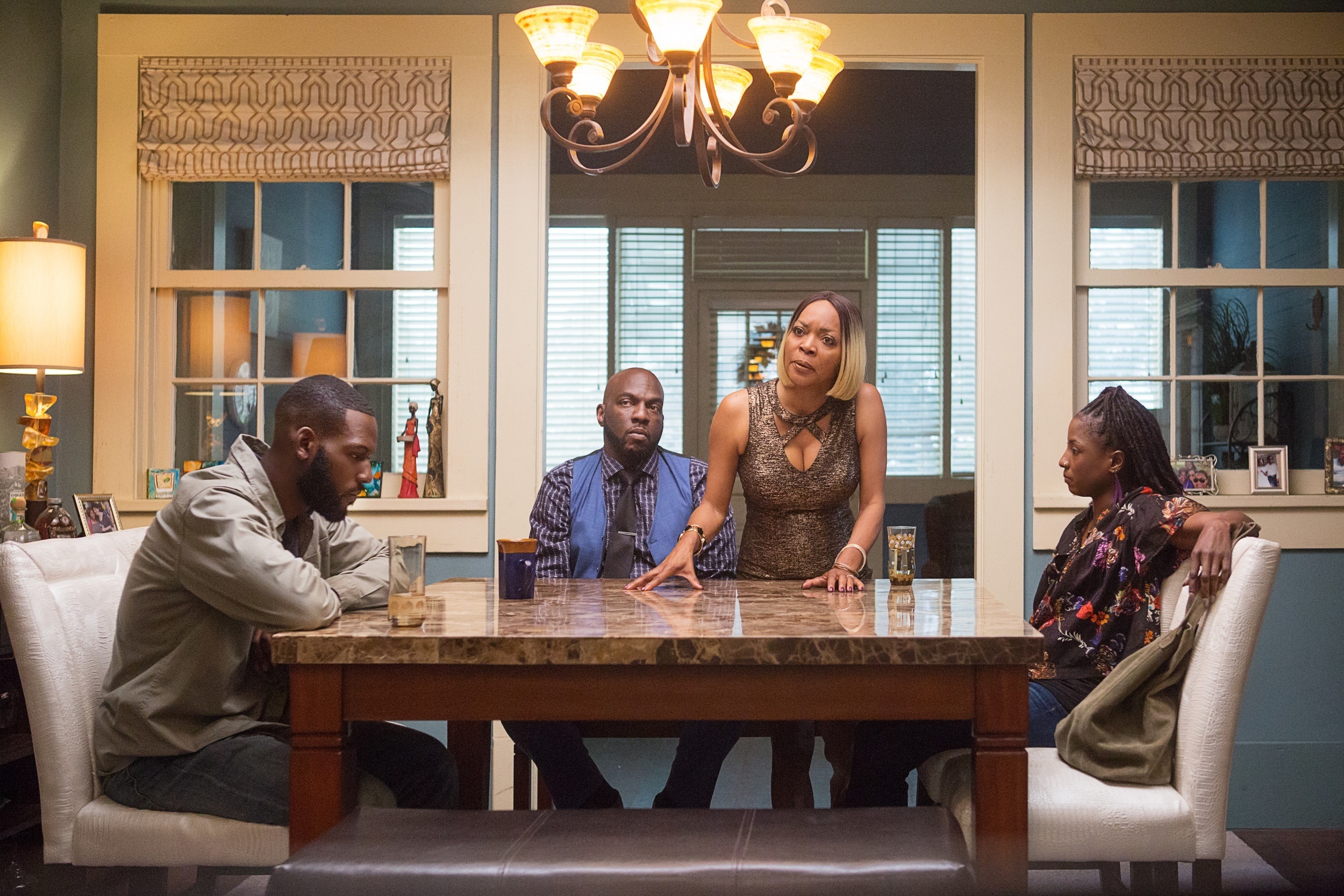 This season opens with Micah trying to figure out his ‘fit for his first day at public school. Charley comes in to remind him that she trusts him –but also to lean on him to keep his grades up (and to turn the music down).

Nova’s on a Skype call with the editor at the New York publisher. It seems there’s a snag with Nova’s decision to leave The Daily New. The articles she’d published are no longer available for publication in the book. She’s going to have to write a new proposal for a book. She glances up at that picture of Ida B. Wells she still has on her wall.

Ralph Angel is leaving the docks where he’s been working. He asks the owner of the seafood plant about his check, saying he needs to leave to pick up Blue, but he’s also fielding text messages from some girl. The plant owner says he deserves a “good girl” and offers to have him over for dinner sometime. She’s sweet.

Later that night, Ralph Angel is again on the porch of his house at the farm when a young woman arrives. He invites her in, and sometime later, Blue wakes up to her putting her clothes back on in the living room. Ra picks him up to take him back to bed.

Hollywood’s talking to his friend Rondel when Vi comes home about investing some in a barbershop. Vi is, as always, skeptical. Hollywood feels like now that he’s flush, it’s no big thing to spend a little bit –which is when he pulls out a sparkling diamond ring and slides it on Vi’s finger. Though she didn’t seem excited about his offer once again to take her shopping the next day, she’s dazzled by the ring.

Micah is walking the halls for the first time with Kiki. Seems they don’t have any classes together, and he’s a fish out of water. This is going to be very different from his experience in private school. But he seems ready to face this change; he wants to be his own person, outside of the shadow of his parents, their wealth, and his father’s celebrity.

Ralph Angel is looking agitated outside his house when a dude walks up. He’s one of the felons Ra’s parole office is sending to work in the fields, and he’s late –saying he doesn’t have a car and took the bus. Ralph Angel points out that the bus is one time. Ra looks skeptical, as this guy’s never worked on a farm before, didn’t come dressed to do farm work, but he also might be useful, pointing out a cheap way to fix the busted exhaust on his tractor.

Charley is talking to some farmers who are backing out from working with the mill. They say they’re giving up the land; they were leasing from Landry. Charley encourages them to keep farming and offers to waive the fees they’d have to pay for breaking their contract. They’re appreciative and tell her she’s a blessing and “her daddy’s daughter.”

Nova and Ralph Angel are sitting at the High Yellow, and Nova’s reminding him that he wasn’t always the most reliable or prepared employee, either, and should give that dude a chance. An older woman comes up to Ralph Angel and tells him how grateful she and her family are for the fixed rate Queen Sugar is offering. Nova wants to know how Charley got all the farmers to come back after they ghosted at the end of the last cane season, but Ralph Angel doesn’t want to get into it. He eventually tells Nova that Charley has a plan to get back at the Landrys.

It’s lunchtime at St. Jo. There’s a security guard wandering around the cafeteria glaring at everybody and just generally being menacing. The kids from the protest see Mr. West and invite him over, and a split second later, Kiki walks in. He introduces her as his girl, and there’s clearly tension between her and the girl Asha. Apparently, the plan for later is to go somewhere called the Phone Booth, and they invite Micah and Kiki, though Asha skeptically asks if she still remembers the spot. There’s definitely some history here. Cue the Rent-a-Cop, who comes over to roust one of Micah’s new friends from his seat on the lunchroom table. He gets up, reluctantly, and stares down the guard as Micah, Kiki, and the others look on. The kids talk about Orson being bandied about in the paper as a “hero.” Micah, of course, knows so much more than the other kids do about Orson and his barbarity.

Everyone’s hanging out at Aunt Vi’s when Nova, being Nova, just comes out with it and asks Charley if she’s doing business with the Landrys. Charley looks at Ralph Angel, and you know he wants to disappear, but some secrets will always out. Charley admits finally that she sold the mill for a 1% stake in Landry Enterprises. Nova and Vi are incredulous after all Sam Landry did to try to destroy their family, the mill, and all the cane farmers who were trying to do business with them. She finally explains that her plan is to take the Landry family down from the inside, and Ralph Angel backs her up. Nova’s not buying it, and Micah, hovering in the background, doesn’t seem to buy it, either. Nova says the game is rigged, but Charley says she doesn’t plan on winning the game but eliminating it and adds, “That’s what Daddy would have wanted.” Nova stridently disagrees, and the tension at Vi’s table is something you couldn’t even cut with a knife.

Hollywood makes the error of speaking up, not as a Bordelon, but as someone else who toiled under the Landrys until he couldn’t take it anymore and walked away. Charley’s quick to concur that, no, he isn’t a Bordelon, and that gets Vi’s back up. She reminds Charley that the Landrys have preyed on their family for years, but Charley says she’s the only one at the table doing anything for their daddy’s memory. Ouch. She finally gets up to leave and tells Micah to come, but he’s not interested.

Ralph Angel is sitting in his truck at the docks when Darla calls. He hands the phone to Blue and goes to get his check. One of the workers, the owner’s son, tells him they missed him the other night at poker game they were playing when he had to leave. His big sister, Trinh, walks over with a bunch of envelopes. She’s visiting from up north, where she goes to college, her brother says, so that she doesn’t have to handle fish. She and Ralph Angel have an easy report, and it seems her mother’s talked about Ra to her. Hmm….

Vi is Hollywood’s date at his high school reunion. He’s dressed sharp -the new money looks good on him – and they’re talking to his former classmates about their wedding plans. Suddenly his high school sweetheart strolls over and gives him an extra-familiar hug, ignores Vi entirely, and turns to talk to other people. Clearly shade, but Vi takes it in her stride.

The next day, Ralph Angel and Charley are sitting on the porch. She’s hurt that he is choosing his friends over her right now and worried that he’s going to hate her. Ra knows that everything Charley is doing is for Micah, for the family. He tells her she’s good and hugs her close.

In the meantime, Nova gets her final check from The Daily News with a note attached from her editor that he should have had her back. She pulls all the clips of her articles from the paper off the bulletin board near her dining table. Time for some new ideas.

In the middle of the night, Ralph Angel hears noise from Blue’s room and comes in. Blue’s wet the bed and is looking for clean pajamas. He says he wet the bed the night before, too, but Ralph Angel was…occupied with his late-night guest. He handles this well, though, doesn’t get mad, tells him they’ll clean it up later, and brings Blue to sleep with him.

Charmaine, Hollywood’s high school girlfriend isn’t done yet being catty. She has the nerve to come over and say hi to Vi, asking if she’s his mother. The gall! Anyway, Vi manages to not scratch her face off, and she and Hollywood go work it out on the dance floor, soon joined by his other friends who are not terrible people. Sadly, Vi doesn’t have the energy she used to have and needs to excuse herself to for a glass of water. She’s tired.

Micah’s hanging out with his Kiki and his new friends. They’re riding a four-wheeler around. When Kiki takes off to give it a spin, Asha asks Micah why he traded his private school for St. Jo. Doesn’t he really like being around his people that much? He talks about how much he admires their action and that he never could have rallied anyone to do something like kneel at his old school. They’re trying to figure out what their next action will be and taking selfies when Kiki returns with the ATV.

Later, Micah goes to Nova’s and talks about how selfish he thinks Charley is. Nova isn’t having it, though. She says that while she may not agree with his mother’s methods, there have always been Black leaders who’ve worked for the same outcome, just in different ways. She reminds him that he should be proud of Charley, and he admits he is –and also proud of her. He also suggests that she write her book about the struggle of Black farmers. Good lookin’ out, Micah.

Vi’s sitting by the pool alone, massaging her hands and waiting for her second wind when Hollywood comes out to check on her. Hollywood suggests they call it a night so that he can take his beautiful, sexy fiancée home. He’s such a good one.

Ralph Angel’s lying awake in bed with Blue snoozing beside him. He gets a text. The woman from the other night is on the porch, showing up for a booty call, but Ra tells her it can’t happen tonight because of Blue and that in fact he’s going to be taking it easy for a while. She takes it well, though. She’s got a kid of her own, and tells him to go on and be a good dad.

It’s morning, and Charley’s apologizing to Micah for not telling him what was really going on with the mill and the Landrys. “If you’re gonna keep doing this, will you at least promise to win?” Then, he says he trusts her.

Ralph Angel is talking to the felon who wants to work on the farm. Turns out he was up for stealing cars for parts. He’s not looking for any shortcuts, he says, and Ralph Angel hands him a form to fill out. He’s going to give him a chance after all, despite his mixed feelings. Just then, we hear Blue yell “Mommy,” and there’s Darla, standing yards away. We knew she’d be back, but for how long?