The Season 2 finale was painful, as everything the Bordelons had been working towards seemed to go up in smoke–Nova’s relationships with both her paramours, Charley’s mill, and of course Ralph Angel’s upcoming nuptials with Darla when she discloses that he may not be Blue’s biological father.

This season opens with Charley jogging from her new home to visit Micah at his private school, where she’s coming to grips with the idea that her baby will soon be heading off to college. She also received a text message from someone with a name–“Officer Orson.” Is she trying to find the police officer who brutalized her son last season? Knowing Charley, of course she is.

In the meantime, Nova’s in New York being courted by a fancy publisher promising a six-figure advance for a book about her reporting about New Orleans. Needless to say, she’s dazzled. They ask her about what she was like as a child, and it’s clear Nova’s been an activist (and shit-stirrer) for a long, long time. But these women want her to leave the grassroots behind to become the next “Ta-Nehisi Coates or Roxane Gay or Elizabeth Alexander” (shout out to some of our faves!), but I think we all know that ain’t Nova. She likes being a shit-stirrer more than she wants to be on the New York Times bestseller list.

Ralpha Angel is trying to keep it moving, but Blue is getting a bit rebellious these days at both home and school. Darla’s absence is wearing on the sweet little boy.

Charley’s smiling big with Jacob Boudreaux and Old Man Landry in a gorgeous, wood-paneled library that looks like slave bills of sale were drawn up in it, and she’s just about to sign a contract until Sam Landry asks young Jacob to step out so he can…what, reneg? Nah, but he is going to drive home the point to Charley that he’s still a racist piece of shit who’s only using their agreement to improve his company’s reputation and make the Black farmers in the area who he coerced into leaving her mill feel better about their (total lack of) choices. His comment that her daddy would be proud of her, however, makes her pause before putting pen to paper.

Nova heads to Aunt Vi’s to see her after her trip to NYC, and Vi’s got some brilliantly violet hair–and is a little high. She and Hollywood just got back from a trip to Italy, and it looks like it treated her well. 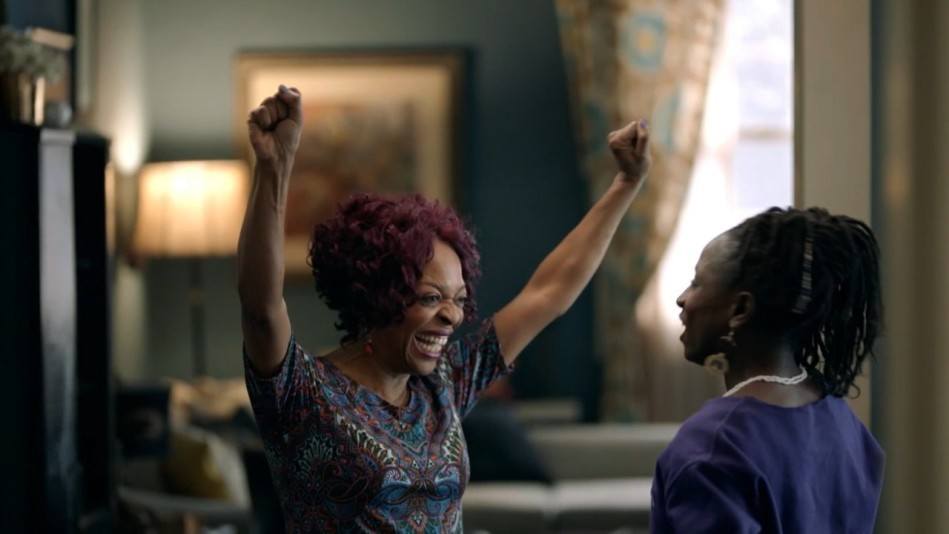 Charley and Nova share a moment talking about the book deal, as Micah hovers nearby with the camera he got for Christmas. Charley reminisces about the picture of Ida B. Wells Nova had hung on her wall when she was a kid, saying one day she’d be just like her. Maybe this book deal is her moment.

With the settlement the fire on his oil rig, Hollywood’s excited about planning his wedding to Aunt Vi. Of course, none of this is easy for Ra–he and Darla were supposed to have happened by now; instead, he’s not even sure his son is his son. He asks Charley if she’s signed the contract with the Landrys, and she says yeah–but finally discloses her plan. By partnering with their company, she now has the right to scour all the Landry’s books and turn up every piece of dirt to take them down from the inside. Go ‘head, Charley. I’m with it. Of course, me suspects it’s not going to be quite that simple, but I applaud the moxie.

Errybody shows up for the big Collings – St. Josephine high school basketball game. Remy is sitting some ways away, pretending he doesn’t see Charley. Blue runs off to follow Aunt Vi to the concession stand after Ralph Angel tells him to stay with him. And waiting on line for a hot dog, Charley sees the cop who arrested her son, and you can just sense her desire to turn him inside out, but she doesn’t. She smiles. She talks to the little boy with him, and learns that the officer has a grandson playing for Collings (the white school). He’s plenty polite, and says, “Have a nice night,” but you know that Charley wants to flay him for what he did to her baby.

And let’s not forget–her baby is here tonight, sans his girlfriend Kiki, since she has the flu.

Out trots a girl from Collings to sing the national anthem, and it’s not lost on us that some people (all black) are sitting. Black athletes are standing, but don’t bother to put their hands over their hearts. And then a handful of black students walk out from the bleachers and kneel on the court. The St. Jo players glance at each other and join them. The to-be-expected cracker-noise breaks out from the stands–“You’re gonna disrespect our flag?” “Go back to where you came from!”–like these Black people and their ancestors haven’t lived and died on this soil for centuries–and with no sense of irony whatsoever, some white fans hold up a Confederate flag, because nothing screams “I love America!” more than the battle flag of a bunch of traitors who lost.

You can imagine what Nova’s thinking this whole time–not only is she smiling, but she puts a fist in the air. Yeah, I’m thinking this book deal with the safe white people up north just isn’t going to happen. Security comes in and marches the protesters off the court and out of the gymnasium, but you know it’s going to be a crazy game now.

Luckily, St. Jo wins, even if the First Amendment doesn’t.

Ralph Angel is strapping Blue into his car when a girl leaning against the car next to his truck in the lot starts pushing up on him. She’s heard he and Darla aren’t together anymore and is hella bold, reminds him he has her number. He doesn’t respond, but we can sense that he might be dialing those digits if he gets thirsty enough.

Out in the parking lot, Charley’s son is still wandering around with his camera. He sees the kids who protested and looks after them wistfully.

At the bar later, Nova takes some older black men to task for complaining about those kids interrupting their precious basketball game. Remy is there, sitting with other folks, but Vi’s not with it and tells Charley they need to stop avoiding each other, so she walks over and says hi. But Remy isn’t interested in joining the Bordelons. Tail between her legs, Charley heads to the bar, and there’s Jacob–he’s a St. Jo boy, so he’s celebrating and making it clear he’d like to celebrate with her–after all, he’s into their “dirty” secret. Charley is not feeling it and walks away–is her interest in Jacob really all about her plan to take down the Landrys? Or is she embarrassed about being seen with him in public, in a mostly Black space? Guess we’ll find out. Regardless, Remy watches their interaction from across the room, and there’s both displeasure and a question on his face.

Back at the farm, Blue’s still trying his dad’s patience when Darla calls. Ralph Angel refuses to talks to her and just hands the phone to Blue so that they can have a video chat. Blue wants to know when she’s coming to get him, and when she’s coming home. She tells him she’s working on a plan.

Despite their lovely trip to Italy, Hollywood and Vi are still navigating her illness and what she needs. They’re getting ready for bed when she asks what’s gotten into him. She’s feeling a bit smothered by how protective he is, treating her like she’s fragile because of the lupus. He points out that he’ll always lift her up and protect her. Personally, I’m not mad at how openly, how nakedly Hollywood loves Violet. It’s refreshing.

Charley is home watching video of a police officer brutalizing a black suspect–where is she getting this intel? She freezes-frame and realizes the the cop in the videdo is, in fact, the same cop from the game earlier–and the same one who pulled over Micah. When Micah comes home later than expected, Charley is upset, but he tells her that life happens, he’s going to be late, and she can’t freak out. Then Kiki calls, and Charley listens to their conversation. He’s excited about the protest earlier. Aww, Micah is fanboying teenage activists. There are worse role models. But anything that might bring him into contact with the police again–and especially Orson–is dangerous.

Nova is also smitten with those students. The day after the game, she’s sitting with them talking about how they planned their protest, and they’re boasting a little about how many views they’ve gotten on social media. This feels like a tell–video means the cops know who to look for. Man, this episode is full of some subtle, nerve-wracking foreshadowing.

Cut to a waiting room. Charley and Nova flank Ralph Angel in uncomfortable doctor office chairs. A door opens offscreen, and a woman calls his name. She hands him the results of his paternity test, and he stares at the folder without opening it. His sisters stand by while he looks at the papers inside. “It’s all good. It don’t change nothing,” says Ralph Angel, his face hard but the tears brimming in his eyes as his sisters hold him. This is such a heartbreaking scene and also a testament to just how good Kofi Siriboe really is. Yeah, everyone talks about how fine he is, especially since his turn in Girls’ Trip (and he is, for real), but also he has spent two seasons playing what could be a trope with such sensitivity and thoughtfulness. He’s a young actor, and I can’t wait to see what he does with his career. 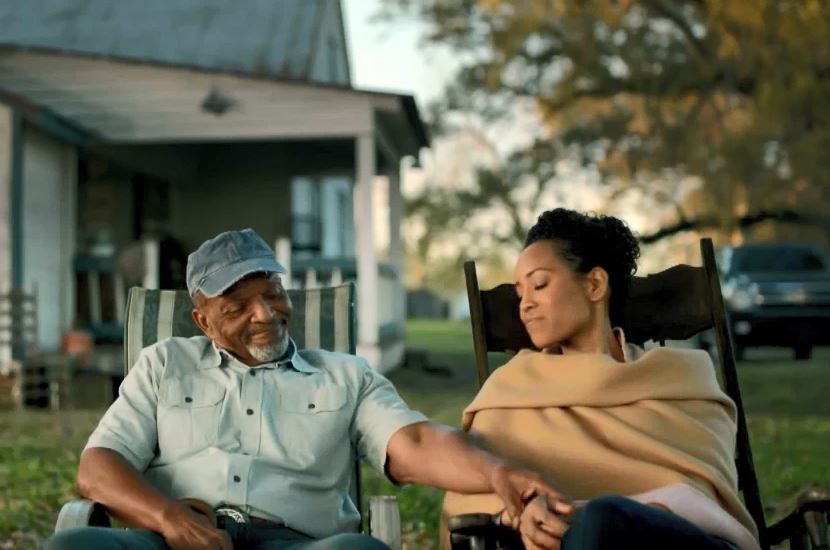 Charley is sitting outside looking at the fields of her father’s farm. Prosper Denton comes out and sits tells her that he needs back surgery–we saw him earlier with a cane, and the vague menace of another Black farmer getting older hits a chord. No one wants to see these farmers all die off. Prosper says he won’t be able to help Ralph Angel much with the new season, and Charley observes that farming eight hundred acres was a lot for their daddy. But she tells him he’s been a blessing to this family and promises him that she’s going to take care of this community.

Outside the little house, Ralph Angel is polishing up a beer when the woman from the parking lot earlier pulls up and he lets her in. Welp. His heart is broken, and maybe this will give him a little reprieve from the grief.

As with each season, the premiere spans two nights. We’ll be publishing the recap of Season 3 Episode 2, “Of Their Sojourn Here,” soon, so check back.