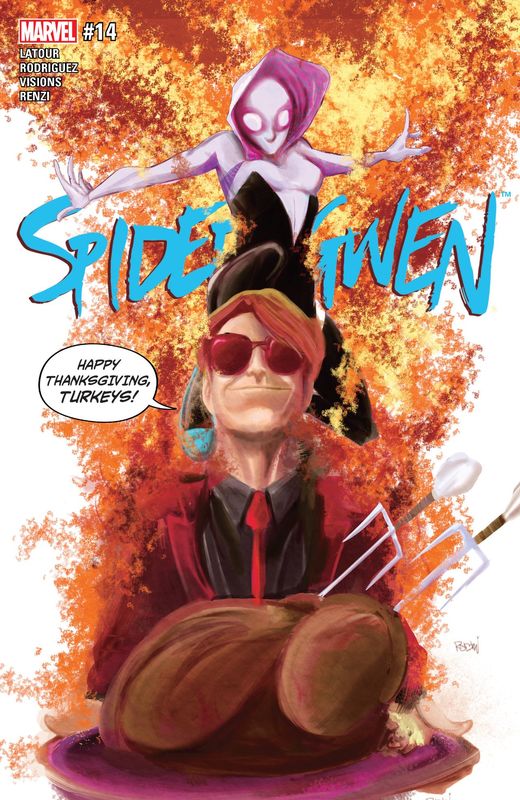 These holiday specials have to go. They’re not doing many favors; not landing the heartfelt holiday cheer – you know what would bring cheer? An ongoing story plot that builds on the foundation that was established back when we reviewed the original series two years ago, and a reminder of all the fun drama we’ve read ever since. I been on since jump, and Spider-Gwen has been one of the series I look forward to most each month. And it will continue to be, I’m sure. Just not between October and December it seems, where winter is here and we’ll have to patiently take what we can get from holiday fillers of emo-Gwen.

Radioactive Spider-Gwen #14 places one foot in the story plot and the other in the holiday-special category, leaving neither of them particularly effective in their respective goals of building a story and adding magic to the holidays. Instead, we follow a melancholy Gwen through a brief interaction with her dad, now arrested, and their new lawyer, Earth-65’s Matt Murdock. Earth-65’s Murdock isn’t who we know from the 6, but rather a dishonest criminal with whom Captain Stacy would be loathe to associate with. Gwen is desperate though, which led us to the end of the Punisher story arc “Weapon of Choice,” where she was desperate enough to make a deal with the [Dare]devil, and to which I’m desperate enough to make that pun.

A minor discovery here, an emotional moment there – the first half of the issue has just enough to inch the story along, if only slightly, and set reader expectations away from any web-slinging or heroism just yet. The second half of the issue cameos Spider-Woman and her family visiting from our home dimension in the 6, and basically does for Thanksgiving what last month’s issue did for Halloween, only with fewer pages. You’ll know the transition happened when there’s a sudden switch in artwork.

Overall, while not a fan of what’s going on right now, weather the storm for one more issue. Pretty soon the series will get back on track. Pretty soon it’ll have to properly address Gwen’s loss of her powers. Pretty soon the holiday specials will be over.