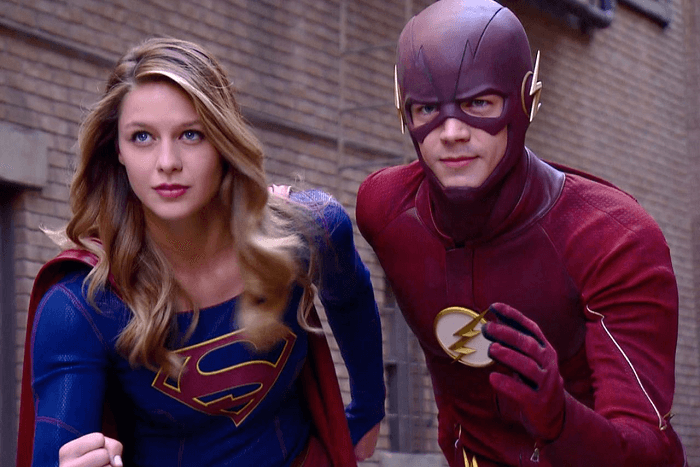 If there are two things I have been about since jointing the BNP team, its The Flash and Supergirl. They lit. Now Broadway fans can rejoice because it’s about to be musically lit! It has been long rumored and even longer desired that Grant Gustin (Flash) and Melissa Benoist (Supergirl) should join forces and let their musical talents shine bright. Both are Glee alumni and both will be sharing the screen from time to time for the foreseeable future. Not to mention the roster of talented singers and performers that each show boasts.

We got the former adaptation of Rent star and greatest dad on television, Jesse L. Martin playing Joe West. Carlos Valdes, who plays Cisco made waves last season when this video surfaced online showing that he’s no stranger to rockin the mic. The last daughter of Krypton’s show has Tony Award winning actress Laura Benanti playing Supergirl’s mom and twin aunt, Alora. Meanwhile, Jeremy Jordan himself has numerous Broadway plays on his resume and that terrible NBC show Smash under his belt, bolstering this roster to a super powered choral squad for the ages. The crossover will use preexisting songs, kinda like Glee’s format. But are likely to include at least one original jam. Gotta make that original song money somewhere in there.

You have mad time to let this news simmer before it happens. They’re reportedly going to wait until after the mega crossover this season before jumping into chorus territory. Although The Flash and Supergirl are the only confirmed shows to get the mucical episode greenlight, they’re not ruling put the possibility of Arrow and Legends of Tomorrow getting into the music mix, despite how much some fans and Stephen Amell hate the idea.