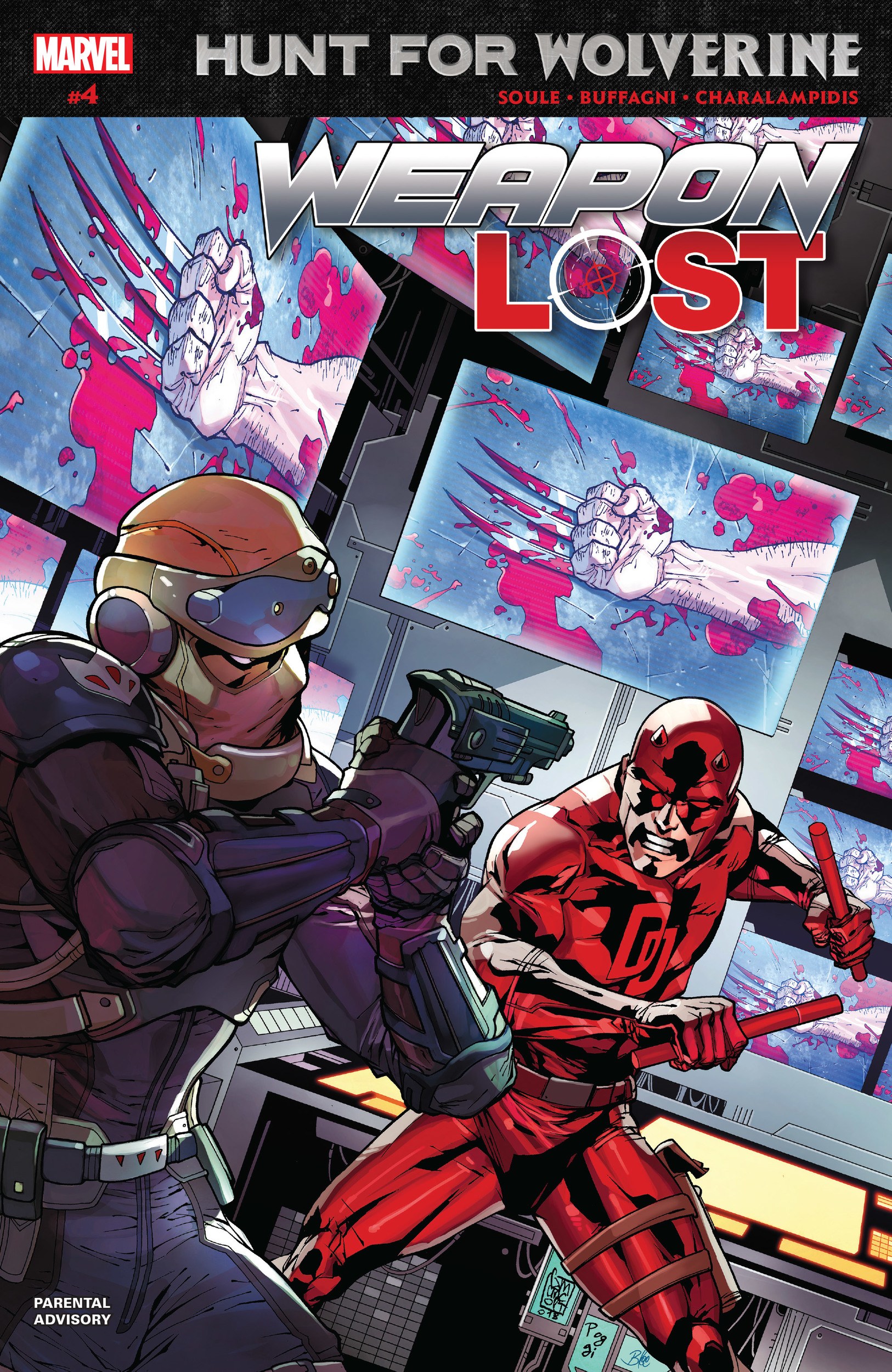 Not every question leads to an answer and not every search yields results.  Daredevil’s misfit team of two ex-cops and a internet-addicted mutant learn this the hard way as what they believe is their final clue to the whereabouts of Logan literally blows up in their faces.  In the fourth and final issue of Weapon Lost, writer Charles Soule continues to plant the final seeds for the September’s “Return of Wolverine,” promising a Logan unlike we have seen before. 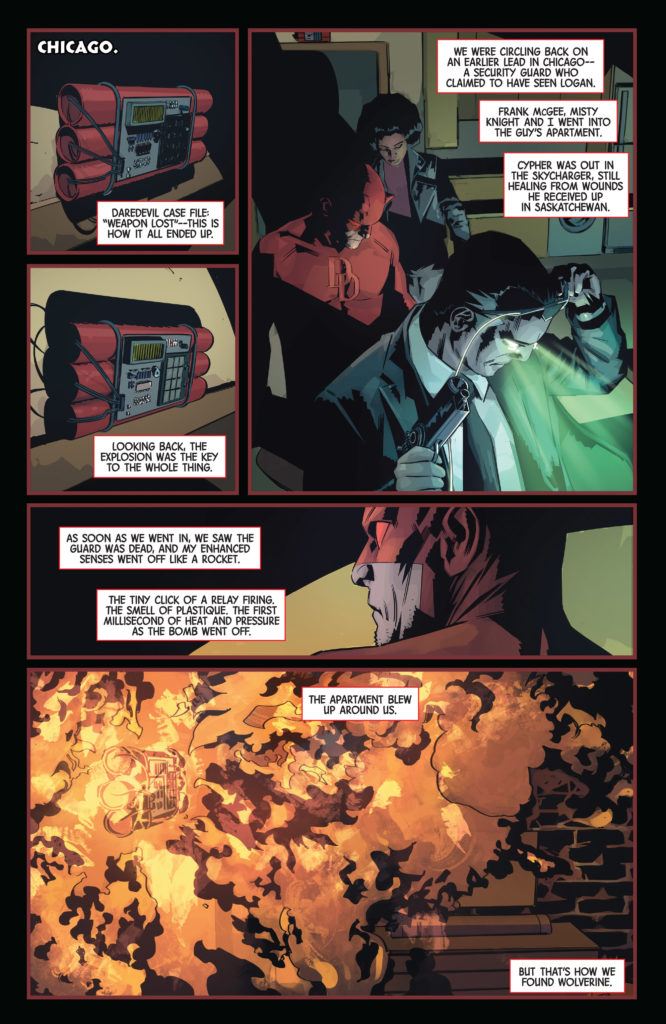 After an encounter with Wolverine’s original cybernetic clone, Albert, the team of Daredevil, Misty Knight, Frank McGhee, and Cypher, realize they dropped one of their original leads too soon.  They  return to Chicago to interrogate the Security Guard who posted a strange amount of Wolverine sightings on his social media, but he is dead by the time they arrive.  Before they can glean too much material evidence from the scene, a bomb explosion throws them to the skies. Misty fires a perimeter shield from her cybernetic arm, covering them from the debris and bringing them down for a soft landing. Although the evidence is lost, Frank McGhee uses his Inhuman abilities to take a photo capture of the scene with his laser eyes.  He gleans the logo of the guard’s costume, discovering the name “Soteira” – the same para-military group turning a small town into zombies and giving Sabretooth, Daken, and Deathstrike a little bit of a hard time over in Claws of a Killer.

The team discovers that like so many companies of ill intent, Soteira is merely registered as an assets company.  Just as they arrive to the company’s apparent headquarters, however, a military unit with orders to purge the building blasts everything in sight, including their own colleagues.   With no other choice than to retreat, Daredevil’s team retreats. They take the L, but Cypher is still able to retrieve some intel from the Soteira network.  Of all the disaster scenarios that can arise from Wolverine’s resurrected body falling into the wrong ones, being apprehended by a multinational terrorist organization with unknown interests is probably in the top five.

Dardevil knows when to fold, and so he immediately calls off the mission after watching video footage that confirms that Wolverine is alive and seemingly working as an assassin for Soteira. Kitty won’t like this news.

Later this month, Soule returns with the one-shot “Hunt for Wolverine: Dead Ends” where the various teams on the Logan Search Party will come together to compare notes, bruises, and “almost found ‘im’ stories.  As this trilogy – Death of Wolverine, Hunt for Wolverine, and the Return of Wolverine – comes closer to completion, the weight of Logan’s purpose and connection to the MCU is explored to the fullest. Ultimately, “Weapon Lost” pays off with a dark cliffhanger that will usher fans into the next series.  As the most consistent of the “Hunt for Wolverine” series, it is far from perfect, but the narrative guidance of Soule draws a clear through line to the overarching story.

The resolution and the character arcs feel a bit rushed to closure, but Daredevil is understandably shook by the idea of a calm, killing Wolverine loose in the wrong hands. That awkward moment when Cypher catches Misty and Frank in a “stress hookup” is even swept under the rug rather quickly as the two former cops decide to be friends and see if their time “comes around again.” Good idea…Falcon would prefer that.

First mini-series done. So much longer to go…