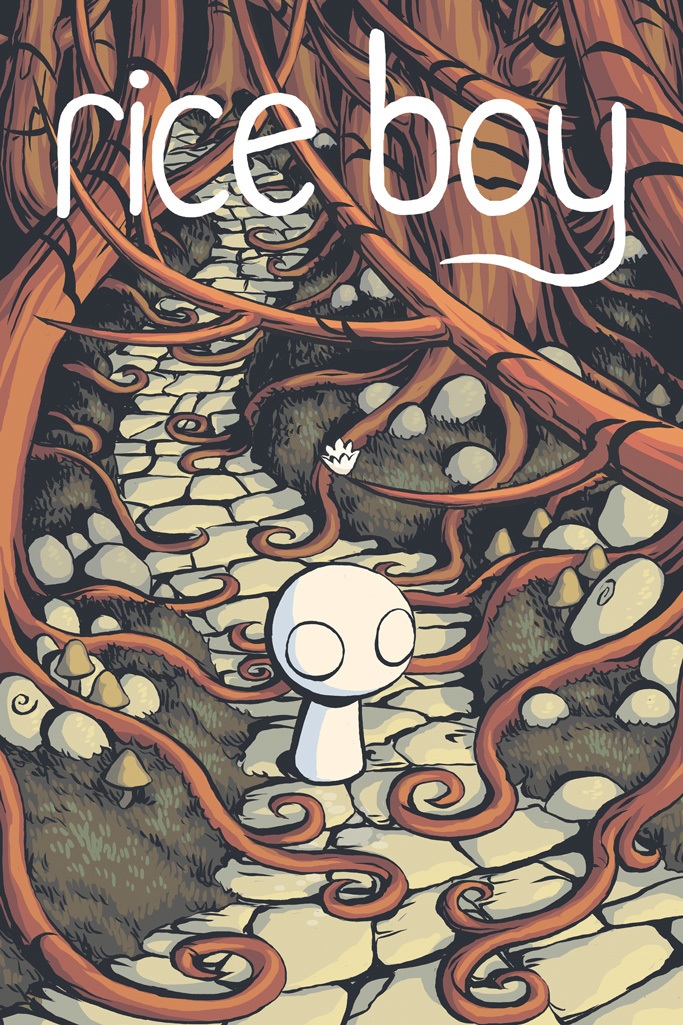 Riceboy is described as a “naïve, impoverished, little person. No arms or legs. Lives in a stump. Surely not a threat.”

Yet, the hero’s journey makes the call and the adventure of a lifetime waits for no one. In short, Rice Boy lives a simple and idyllic life in the mystical land of Overside until he’s called upon to fulfill an ancient prophecy.

What you need to know is that Riceboy is the tiny and reluctant hero. He is joined by, aided by, tossed by, and hunted by an electric number of creatures on his journey across the vast and fantastic world of Overside. There’s “The One Electronic” who becomes a sort of mentor to him, attempting to explain a great idea in their first meeting. There’s Gerund, a new friend who happens to find and lose him several times before it is over. There are battles to be fought, wizards to impersonate, paths to walk upon, lots of funny bits and many, many tears to shed in his travels to far and scary and amazing places. 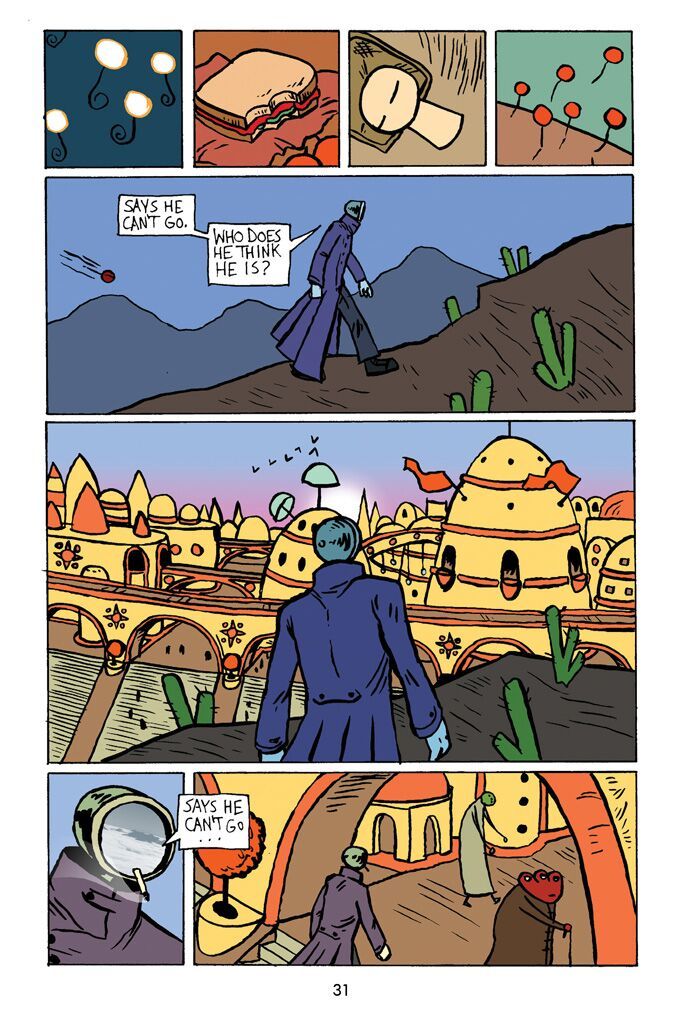 The art just POPS on the pages with color! It is never over the top, instead, a welcomed addition to all the new characters you meet with each new set of pages you read. Speaking of characters: everyone and everything from the frog kingdom to machine men to tree guardians to giants and machine critters make our acquaintance. Riceboy who is so unbearably cute with his simple character design has a full cast everything and everyone under the sun to compliment his journey and you will quickly find yourself emotionally invested in their struggles and triumphs the longer and longer you read.

For those who may be intimidated by the size of this offering: with five books in total that make up this tome of 400+ pages, I just have to assure you–please don’t be! Seriously. This is not a book you want to miss based on something as silly as that. The lore of this universe that the narrative is set in does come slowly, bread crumbs here and there yet you’ll still be engaged. In fact, I sat down and read some 180 pages in–forgetting myself and be enthralled by the happenings on.

Dahm makes the heart of this body of work grip you, pull at your heartstrings and stay with you long after you’ve finished reading. Several themes that live in the lifeblood of this volume include: having a sense of duty and what that looks like to different characters over time. Upholding your duty, abandoning it and for some– being revitalized to pick it back up again. Another important theme is how selfishness and ego can transform leaders and people to do terrible things, which is very relevant today.

Being homesick or wishing for the familiar when you’re not even sure home even exists anymore or that your family does either. More than just one character labors under societal expectations–not just Riceboy–and it spoke to me on the pressures that are put on us and the titles we have to manage. I also reflect on stepping out of your comfort zone and facing your fears–to become brave, to accomplish the task, to protect someone you hold dear, to finish what you started but perhaps most importantly: to become the person you need to be right now.

If you’re newer to the alternative scene for comics, like myself, Riceboy is perhaps one of the industry’s best-kept secrets and certainly one of the best books to take a chance on. Creator Evan Dahm is no newbie though, he is a prolific talent with a diverse collection of fantasy stories under his belt including Order of the Tales and Vattu. this body of work just happens to be one of his first forays into it all as he’s been self-publishing for years.

In addition to his self-published work, Dahm has also co-founded the art book publishing company Benign Kingdom, and has done work for BOOM!, Paradox Space, and Iron Circus Comics. Being a veteran of the small press and mini-comics scene for his years of craft (and thousands of pages), it must be a just thing for those way more intimately familiar with him to see his work now more wildly available and recognized.

Riceboy, once a webcomic, was self-published into a small-run print edition, will now be his first edition with national distribution. This means this Winner of the 2014 Ignatz Award for Best Online Comic and the 2013 Stumptown Comic Arts Award for Best Webcomic can now be available in many more hands for many more readers for hopefully many more years to come.

At 460 pages, this is an epic, a saga to lose yourself in one or a few sittings. Evan Dorham’s tome is worth its weight in gold or orange popping plants. I’ve read that Riceboy has been likened to a few beloved tales including Alice In Wonderland (for its topsy-turvy premise and narrative) Anything Tokien but to name a specific tale Lord Of The Rings (for its journey and all the many faces that help/dismiss a prophecy) and lastly Saga for its strange cast of characters.

I’d describe Riceboy as a cocktail made with three ingredients: part high fantasy, part slice of life and lastly part epic quest. It stands in good company to be likened to those three great bodies of work (with a gentle reminder than Riceboy was created before Saga from Image Comics came into existence and found a way to all our pull lists) yet I want to be clear that Riceboy is its own unique book with a compelling story that deserves its own place on your bookshelves and in your hearts.

Strange and Wonderful, Riceboy is a Delicious Treat to Be Devoured.

See more of Dahm on Twitter, Patreon and Topatoco. To see more of Dahm’s extensive body of work check him out here. See more of Iron Circus Comics and their books here .