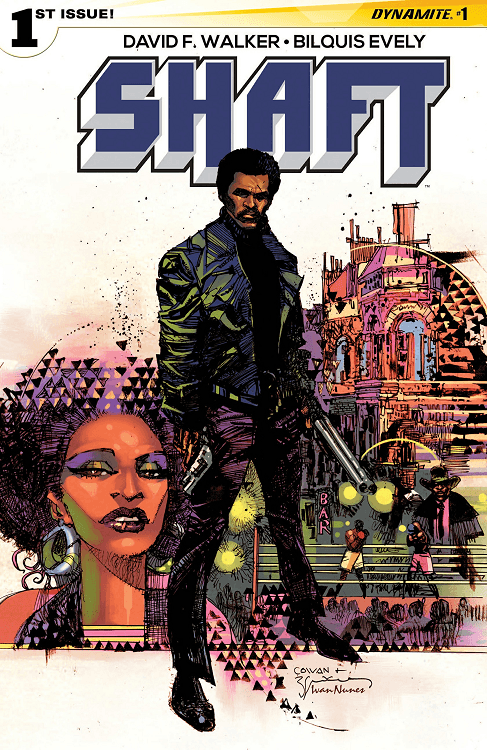 After months of waiting, the long anticipated comic release of Dynamite Comic’s Shaft is upon us! The series reboot, written by David Walker, reintroduces the late Ernest Tidyman’s iconic character from the 70’s in a comic that gives a first-time exploration of the origins of John Shaft. Whether the name conjures images of Richard Roundtree’s afro and sideburns or Samuel L. Jackson playing his nephew in the 2000 sequel, the name is synonymous with toughness, badassery, and one of the best theme songs of all time.

Issue 1 begins in the criminal underbelly of the New York City with a racially charged dialogue that sets the tone of the story. Junius Tate is the gangster who runs Harlem, only anyone who knows better understands it’s really his boss who runs the streets. Shaft knows better. Either way, as Shaft wraps up his hands to get into the boxing ring, he knows he has a decision: take a dive that Junius set up, or be a fighter that lays down for nobody. Which man would you expect John Shaft to be? 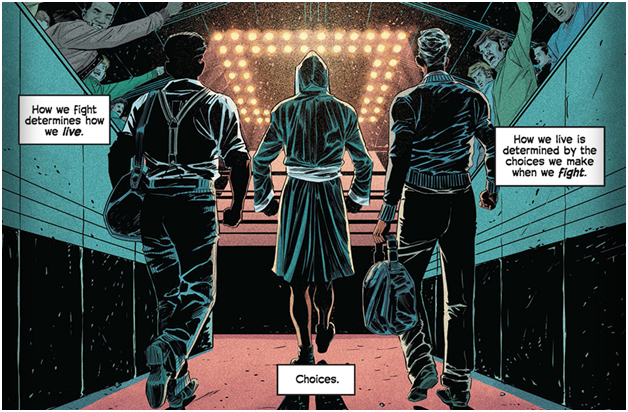 With references to Vietnam and a nod to Cassius Clay turned Muhammad Ali, Walker captures the climate while simultaneously revealing the man’s character developed through childhood, war, and personal heroes. One of those heroes was Bamma Brooks. Bamma was the one who taught young Shaft to box, who taught him to never lie down for anybody. Imagine what it would do to your psyche to see that same man working for Junius Tate, the man paying you to take a fall and commanding you get tuned up in an alley after you refuse. These are the events that molded Shaft the man, to Shaft the legend.

If I had to choose a drawback to issue 1, I would only site some expressionless faces. The artwork is great as a whole, except some fight scenes have characters whose faces look less like they’re fighting and more like they’re waiting for the crosstown bus. You might catch yourself staring at a panel wondering if you could ever look so stoic throwing a punch.

That aside, Shaft’s first issue has every sign of being an awesome series worth following closely. He makes his own decisions and faces each consequence. And the last page shows the insecurity you need as a reader to care for his character and cheer for him every step of the way: “Now, all I had to do was decide what to do with the rest of my life.” I’m excited.