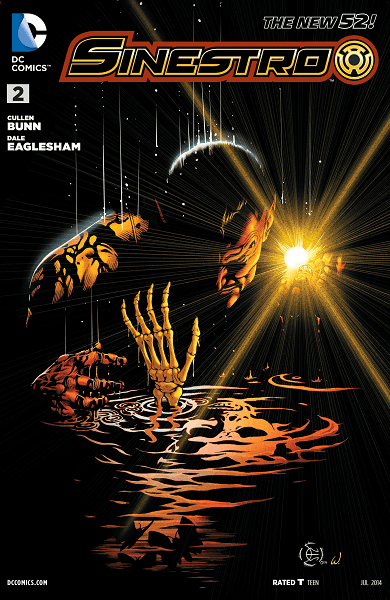 If you are reading two of Cullen Bunn’s newer books, this and Magneto simultaneously, its hard not to compare the two characters and how Bunn presents them. They are both complex characters, most commonly known as villains, both of which have been part of or the chief antagonists of big super hero groups (Green Lantern Corps and X-Men respectively) and now, in their own series, are trying to do a noble cause for their people. With their own brutal methods. That isn’t to say Bunn is writing them as identical, because he isn’t. But maybe it is a recipe for success given the stride that Magneto is hitting. Sinestro #1 started slowly, building the story as around the titular character as you would expect a #1 to do. This issue begins with Sinestro almost single-handedly taking back his Sinestro Corps and proving why he’s one of the most powerful ring slingers ever (nice touch with him destroying a ring with his mind by the way).

While the retaking of the Corps is entertaining and Bunn nails Sinestro’s arrogant demeanor in the process, there are some elements of the story that feel a little skimmed over such as his reunion with Soranik or the impending threat of the Church of Anti-Emotion (which I guess are evil versions of guardians?). The third act of the issue deals with Sinestro becoming familiar with his lead lieutenants as they show they can be just as brutal as Sinestro in dealing with dissension in the ranks.

This book might be picking up some steam, but it still feels like its spinning its wheels a bit. Hopefully we’ll get a little more direction as the central conflict comes into more focus.