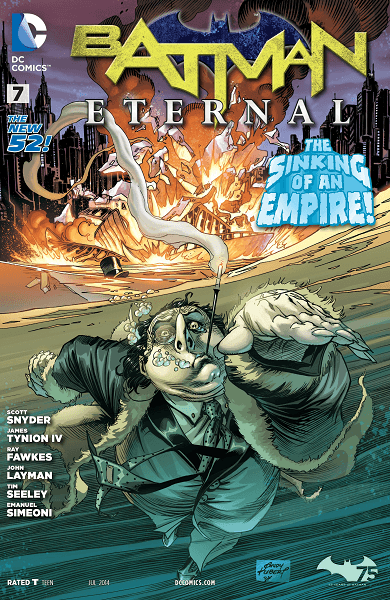 If it weren’t for Scott Snyder’s Zero Year run in his other Bat-book, Batman Eternal would be the best title in the franchise. Even though it hasn’t been around a full two months yet, for all intents and purposes, a weekly book like this would usually have become convoluted (52) and lost its appeal (if it had any at all….this means you, New 52 Future’s End). However, this story seems to become more layered and engaging with each issue.

With Snyder and James Tynion IV still laying out the overall story, Tim Seely takes over the scripting duties this week. We pick up in issue 7 in the very instant after issue 6 where Batman has been blindsided by a villainous distraction compliments of Carmine Falcone. It’s nice to see the return of the Roman finally delivering on the potential hype. As the war between the Penguin and Falcone heats up, we see some fun moments of intervention with Catwoman at the Iceberg Casino. The previous issues, even being obviously connected, had more of a standalone vibe to them that came across sort of disjointed. It’s a nice change of pace to have an issue that feels more connected to the one before it. The action is definitely ramped up compared to the last couple of installments. There are times when it’s easy to get lost keeping up with the happenings from one place to the next, but Seely handles the transitions mostly well. Emanuel Simeoni takes the helm on artwork and doesn’t disappoint. He manages a very moody color palette that improves upon last week odd offerings from Trevor McCarthy.

Bottom Line: A little improvement in visual goes a long way for this stellar addition to the Bat franchise. 8 out of 10