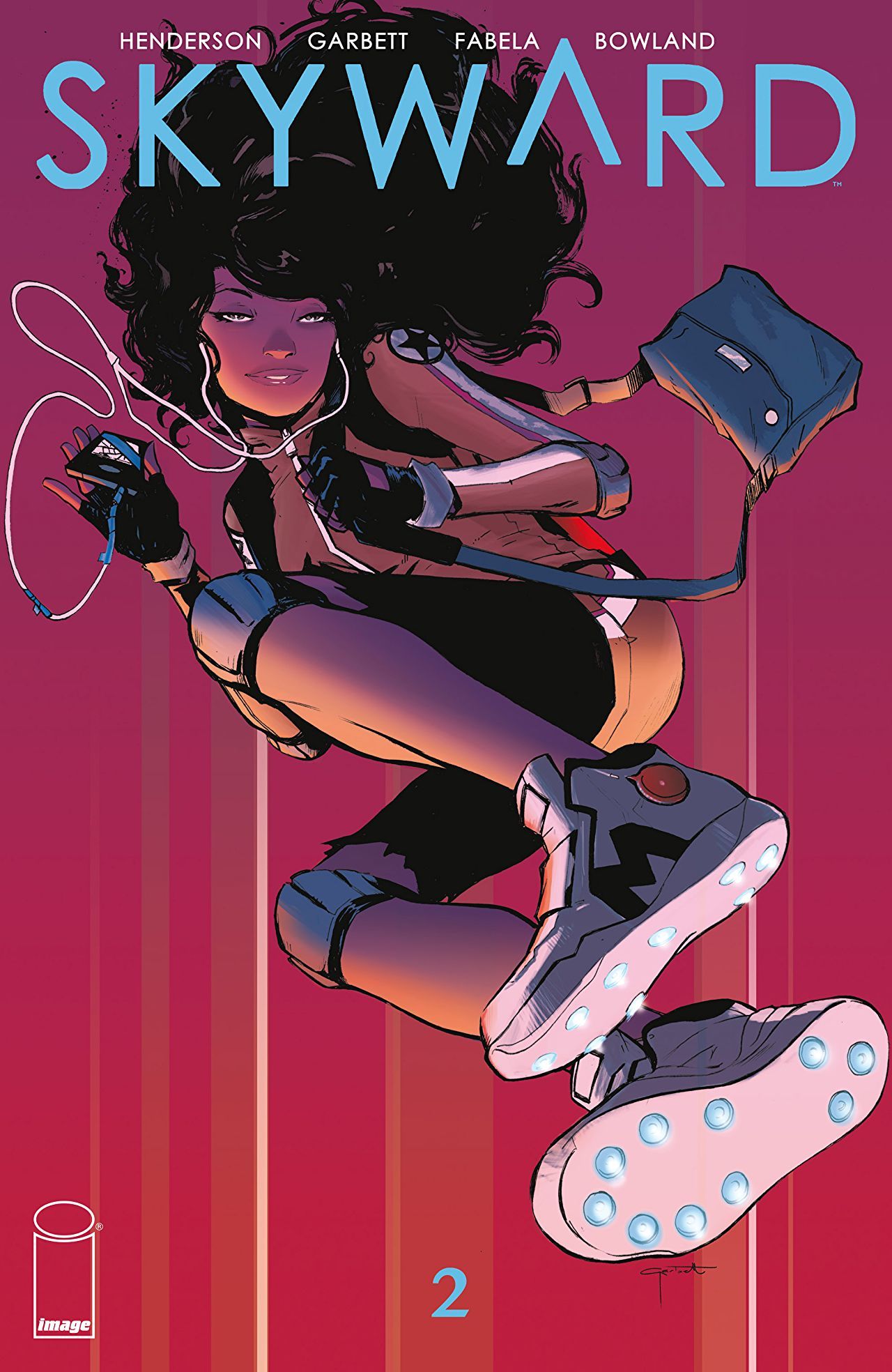 It’s great to jump back into the world of Skyward. Zero-G and floating away make for a fun place to play. Last issue we were introduced to Willa and the world of Skyward, which is a lot of fun. We ended that issue with Willa’s father Nathan dropping the bomb that he might be able to fix the world. Presumably guilty for turning it the way it is now. However, there just one problem with that. Nathan has a supreme case of agoraphobia (an extreme fear of tight spaces), brought on by the tragic events of G-Day and losing his wife.

We immediately see the tension between the two of them that was teased in the first issue. It’s easy to understand Nathan’s fear of the outside world, but his trauma is at odds with his daughter’s free spirit. So much so that she’s basically taking care of his every need her whole life despite the fact that she wants to explore the world. 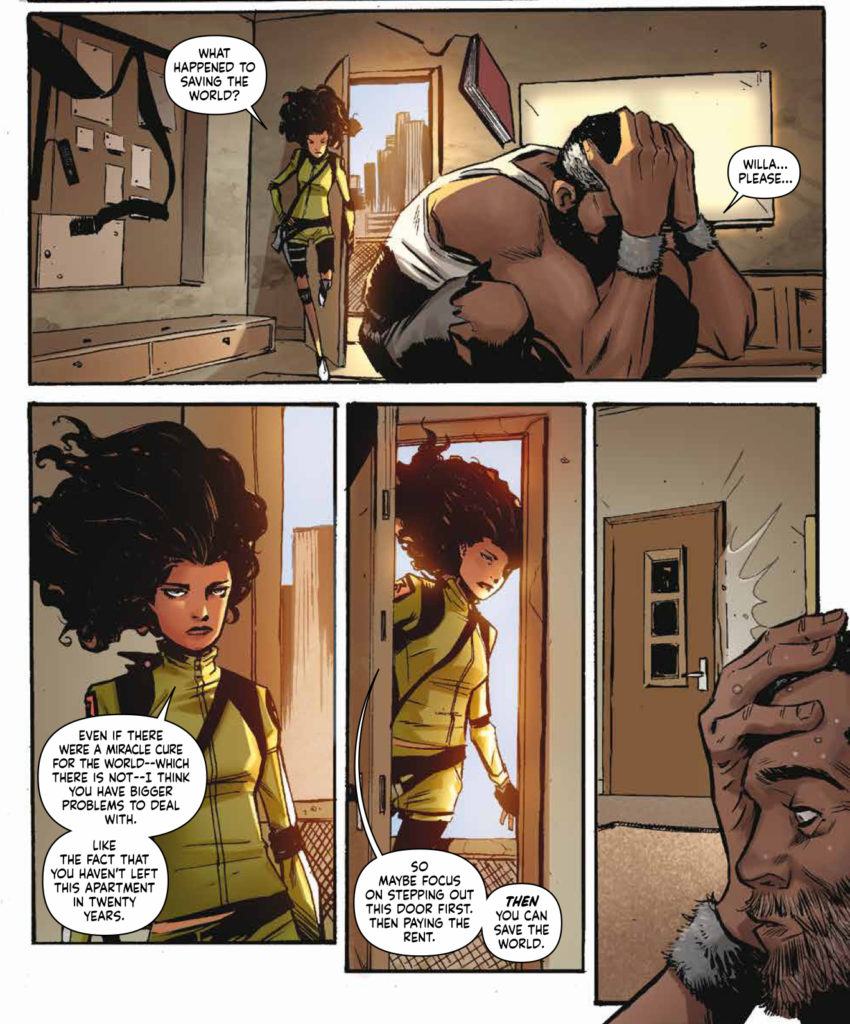 So what’s a girl to do? Well, without spoiling too much, Willa’s optimism kicks in again, setting her on a mission. This brings me to my favorite part of this issue. We get to explore another part of Chicago and get to see how the lower half of the population live – mainly the rich. It turns out that Nathan is not the only one afraid of the world’s new gravity. Stepping into the streets of Chicago is fun because it feels like a different world, especially with the technology that they use and how they think.

This kind of world building really builds the world’s turn upside theme. It also goes against one of the more cliched of sci-fi tropes, where the poor live down on streets while the rich live high in the sky. Artist Lee Garbett has a lot of material to work with and does a fantastic job with it. Once again, every panel is one to pay attention to as he plays with the technology introduced and the weightlessness to everything. It’s subtle too because it doesn’t quite look like they are flying like a tradition superhuman would but just floating there on the page. 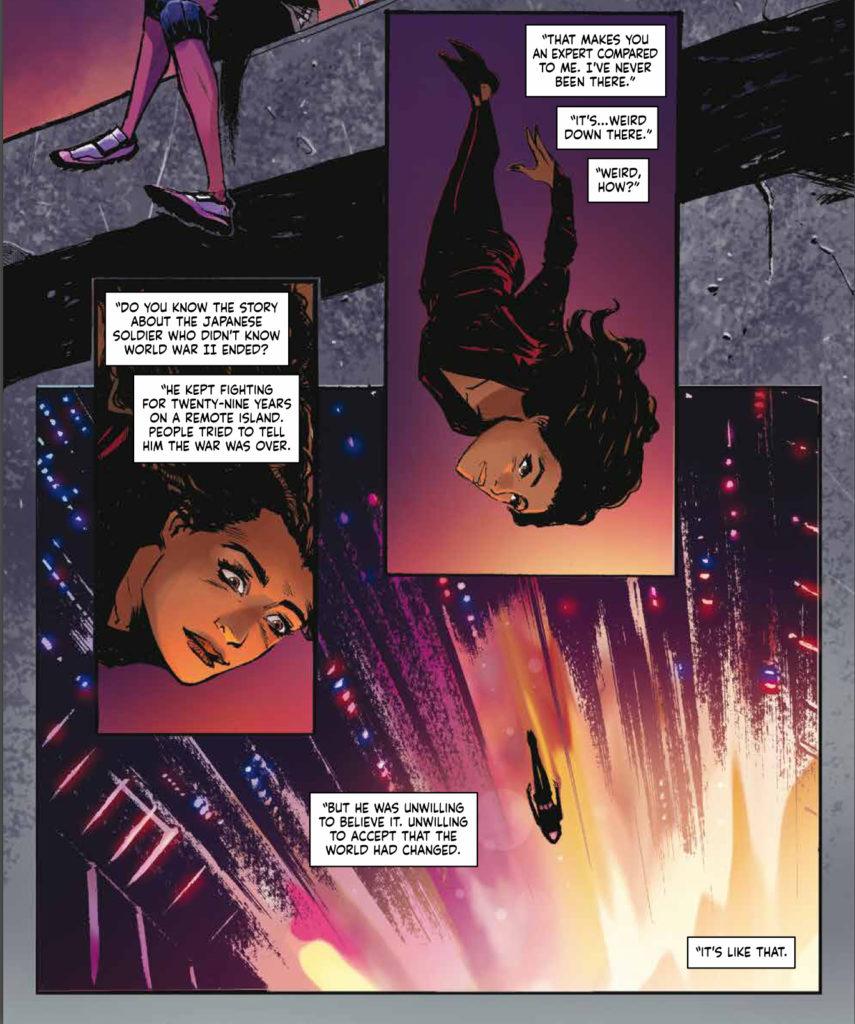 One thing I will note is that while Willa’s adventurous spirit and overeagerness to escape her life are fun, we are already starting to see how much trouble it’s getting her into. It will be interesting to see what she stumble into further down the line and hope we keep getting more amazing issues of Skyward down the line.