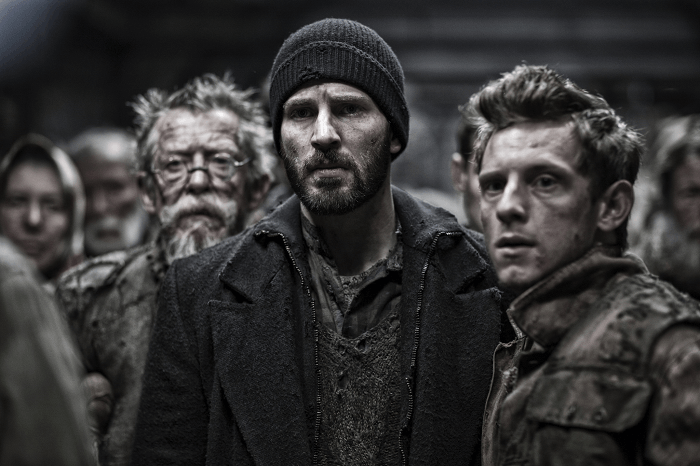 As a writer that has played around with screenplays or pilot scripts and has a love for cinema, there are times when I sometimes feel like I should just focus my efforts on writing a really good script, try to sell it and try to set myself up for a more lucrative way of creating. Sidestepping all the plot holes in that plan, seeing a movie like Snowpiercer often stops me dead in my tracks and makes me say, ‘yeah, probably not as ready as I thought I was.’

Snowpiercer, based upon the critically acclaimed graphic novel of the same name by French author Jacques Lob, is basically a master’s class on how to make an emotionally rich and stylish dystopian thriller: one that asks a lot of questions from its onset and successfully answers them by the end of the film without any revelations feeling cheap or easy. In fact, everything in this film is earned, somehow keeping the action heavy and moving, the mysteries swirling and the story-telling fairly tight and consistent.

While the dystopian setting is as popular as zombies right now for TV and movies, this particular set up is unique. The film begins in 2014 with a world wide attempt to quell the perils of global warming by releasing a cooling agent into the atmosphere. The results are disastrous and culminates with the world being frozen over, killing almost all of humanity and every other living species (can’t wait till conservatives get a hold of this). The last remnants of human life are aboard a huge train whose tracks travel around the entire frozen globe. From the visionary Wilber, who designed the train, it’s very clear: the train keeps moving and the people aboard it stay alive. Sounds simple right? Well… After 17 years aboard the train, the class divisions and horrific conditions of the those in the tail of the train have reached a breaking point and the impending uprising of the lowest class of living people pushes the story forward. Instantly recognizable from his now uber-popular role as Captain America, Chris Evans leads a pretty damn good cast that handles their stations pretty well for the precarious positions they find themselves in. Evans himself does a good job as the strong willed leader of the revolution by never out-sizing what the role is. He is physically equipped for all the action (the man is Steve Rogers now people), but he carries a steel in his demeanor for the length of the film that is absolutely necessary for the role. There are a number of strong performances from others throughout, especially in Tilda Swinton who serves as a lieutenant of sorts for Wilbur who carries out the coarse justice and discipline to the ‘tailies’ and Alison Pill (Newsroom, Scott Pilgrim vs The World) whose bizarre turn as an educator captivates the screen.

Having not read the original graphic novel, I can’t comment on its relation to the film or how much of the source was honored in the film, but I can say that the movie is paced about as well as it possibly could be. The film never feels rushed, yet has enough satisfying action set pieces to keep the audience on its toes at all times. Still, no exposition seems to suffer because of it. Plot threads and mysteries tumble out every so often and keeps the hook firmly planted in your cheek until the next revelation comes. While Chris Evans does a wonderful job and is the headliner for the movie, I would still venture to say that the director Joon-ho Bong is the star. The way in which he handles the plot, the desperation and action is masterful. He turns a lot of tropes on their head such as the tight corridor fights or the use of slow motion. He seems to be more deliberate and careful with the particular visceral moments. There are no careless shots fired or punches thrown, they are all accompanied by heavy sound and impact on the screen. In a way, it’s shot like an anti-Michael Bay action film. There are also so many twists in the plot to make you dizzy as the audience experiences different parts of the train for the first time the same as Chris Evans’ ‘Curtis’ character.

Lastly, what makes Snowpiercer a great film in my estimation is the disturbing weirdness that bleeds throughout. From the way Tilda Swinton’s ‘Mason’ dresses to the story time scene in the classroom, there is a persistent tone that something is very off about the civilization that has been created on the train. It is reminiscent of the Hunger Games in how those that are well to do are so removed from the common struggles of the people and that privilege is manifested in how they present themselves physically. The devout worship to Wilbur alone is weird among the more well to do passengers of the train, but what could pass for funny or silly is almost always met with extreme danger and peril on the other side of it.

I’ve liked the prospect of Chris Evans as a leading man for a little while now, but I doubt I would’ve wagered that you could say he’s been the lead in two of the better constructed films of 2014. Snowpiercer blends a lot of expertly done movie elements to tell a non-conventional thriller. The direction is the star of the show, but there’s plenty of reasons you should go see this flick.