I’m not sure what the pitch meeting for the movie treatment of Sonic the Hedgehog looked like, but I imagine it went something like this:

2019 has been a weird year, y’all. We’ve left the arguments of whether or not water is wet in the past, we killed (several) Avengers, we danced down a staircase in the Bronx, and we got not one, but two trailers for a Sonic the Hedgehog film. As is the case with most video game movies (we Stan Rampage in this house), I was fully expecting a car crash. As with all video game movies (I say, while still Stanning Rampage in this house), that’s exactly what the first Sonic trailer showed us. Anyone who has ever been in a car with me knows I’m all about that noise so I was ready to go and GO FAST.

The original trailer for the movie was, to be kind, an unmitigated disaster. The long dancer’s legs. The teeth. The Coolio!

It was a mess of the messiest order and frankly, I was HERE FOR IT. Fans of the series, myself notwithstanding, were not so much. There was outrage and fury the likes of which the internet had never seen that week and so the studio promised to make some fixes.

You may notice at this point that I have no link to the original trailer. There’s a reason for that: it was pulled. From all sources. I spent an hour googling, and nada. If not for Twitter, I’d have no proof this was ever even a thing. But thank my lucky golden rings, do we ever have Twitter. The original Sonic trailer in images and tweets, folks:

Good morning to absolutely everyone and everything other than live action Sonic the Hedgehog’s creepy human teeth xx pic.twitter.com/yJX6WPW7Li

Even more excited about Detective Pikachu now. Sonic.. no pic.twitter.com/WH3a1xB3TD

One more reference and I’ll have to give Marie Kondo a co-writing credit.

Maybe Sweet T had a point.

If Bullseye did the fusion dance with Steph Curry he couldn’t come up with something more accurate.

When Paramount Studios said they heard the fans and were going to make changes, I was skeptical. They were clearly most of the way to creating. . .something. So, imagine my shock when this morning, this comes over my interweb feed: 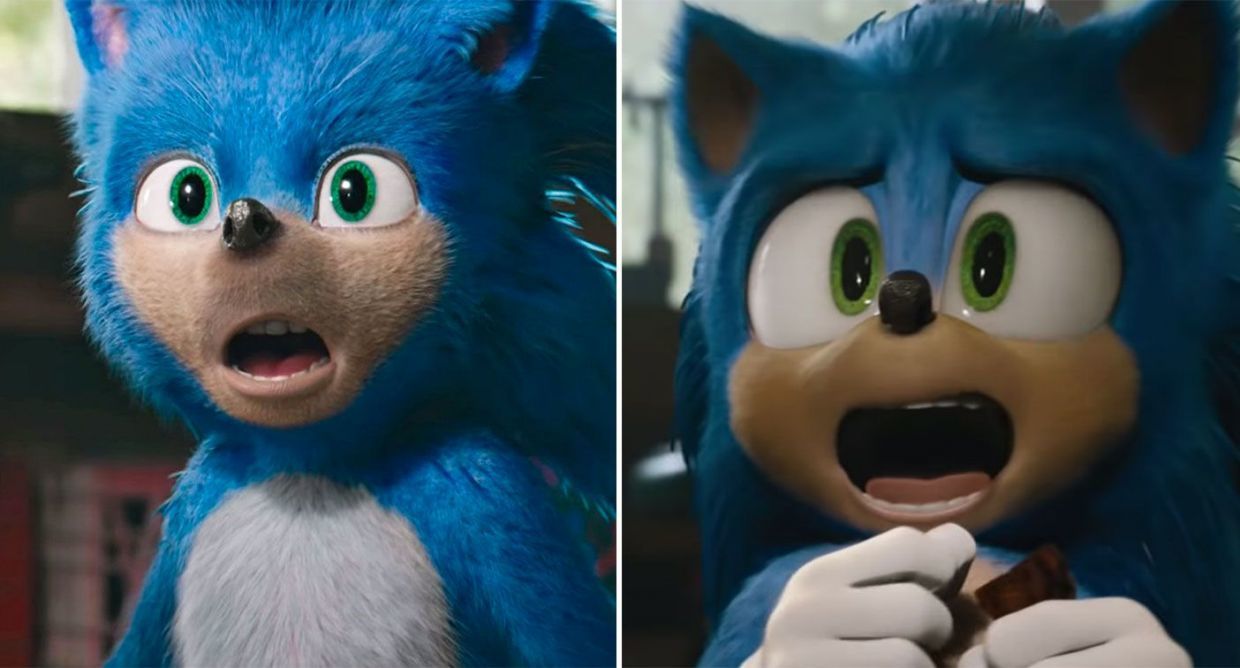 Sonic looks good? The movie looks fun? Jim Carrey is there? They really did go back to the drawing board and rebuild their movie treatment of the blue blur from the ground up. Let’s start with the basics: visually, nothing changed but the design of Sonic. Realistically, that’s all that needed changing, and like Lebowski’s rug, it totally brings the room together. The trailer just feels different. Perhaps that is because we can focus on things like the writing, cinematography, and background aesthetic now. Perhaps it’s because they decided to ditch Coolio in favor of the much more fitting Ramones tune “Blitzkrieg Bop” (which slaps, by the way. Not mad at it.). 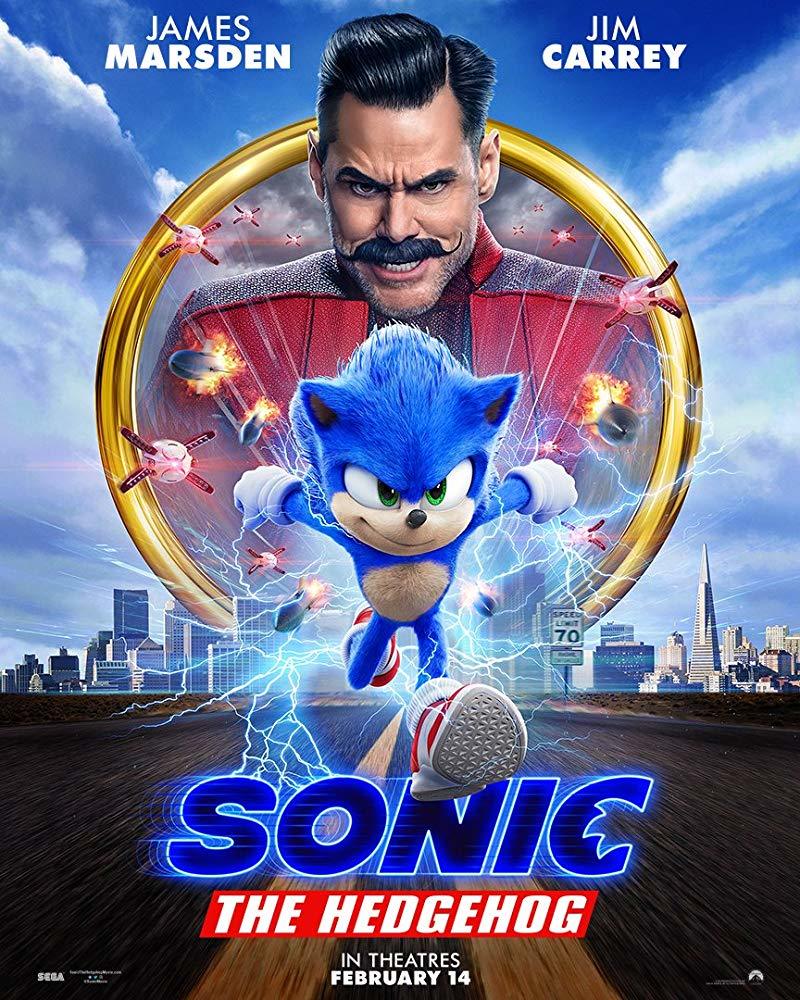 Or maybe it’s just because they clearly spent time and effort and love with this franchise to make this piece much more of a tribute. In addition to the Ramones we also have “Super Sonic” and a remix of the Green Hill Zone theme from the original game. Further, there’s a couple references to the games that don’t go amiss here. One that comes to mind is Sonic’s impromptu ping-pong table, a highway sign for a Hill Top Drive, a reference to the Sonic the Hedgehog 2 level of the same name.

This trailer and, hopefully, this whole film, had a level of heart to it that was sorely and hilariously absent from the previous preview. Between the treatment of the IP here and the scrubbing of the old trailer, it’s clear they want us to forget there ever was a toothed wonder and I’ll be honest, they did a good job towards that goal.

And you know what? EFF THAT.

AND THAT IS MY PROBLEM.

I don’t go into a Sonic the Hedgehog movie expecting Inception (2010). I go in expecting, well, a video game movie. I know it’s not going to be a tour de force. I know it’s not even going to be good. The appeal here, in my opinion, was just how much of a disaster this was going to be. I’m not ashamed to admit that I love loving things ironically. This is part of what makes video game based movies my jam. They are consistently B-list. What the first trailer for this movie did was make it memorable.

As someone who, at my core, loves all video games, I just want them to be remembered. I know of a time where asking what someone’s favorite video game was considered a poor social more because gaming was so niche. Seeing how far it’s come is always heartwarming for me, and seeing a character that has frankly struggled lately to garner attention gain any attention at all, even if it ranged from bad to horrifying, was good for me. Why? Because people invest in what they pay attention to. The horrific trailer gave people a reason to care about Sonic. When was, before that trailer dropped, the last time Twitter had anything to say about that character?

All that to say that my fear here is thus: I don’t want my beloved characters to be forgotten. I don’t want Sonic to go the way of Mega Man or Bubsy or Banjo-Kazooie or any other of a litany of mascots that have come and gone from the public consciousness over the years. I am afraid that this movie will only be okay. Nobody remembers okay. National Treasure: Book of Secrets was okay. Batman: Arkham Origins was okay. The Room? Cluster. Anything Uwe Boll has ever touched, including a boxing ring? Complete and total train wreck.

But people watch train wrecks. We can’t help it. It’s human nature, like a cat sitting in a box or a cow not reacting when it is toppled while sleeping in an open field. I want people to see my past so maybe we have a shot at seeing some of those franchises make a comeback. Will I be going to see this movie? Absolutely. Will I be pouring one out for the nightmare fuel that could have been? You better believe it. Will I be hoping for better for the characters that got me through my childhood? Always. And if they get back on after all the trials and tribulations of time? Well, to that I would say:

The film is set to star Cyclops, the Mask, and Tom’s white friend from Parks and Rec., and premieres on Valentine’s Day in 2020. I already have a date.

Written by friend of BNP and guest writer DJ Rogers. See his other writing here. You can follow his nerd adventures and gaming thoughts on Twitter.