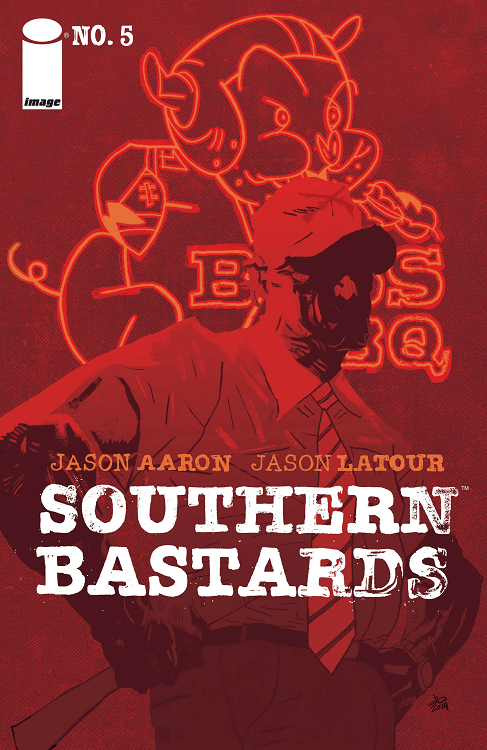 While I wasn’t reviewing it, I should make you aware that the first arc (1-4) of Southern Bastards was kind of…incredible. Not grandiose in anyway. This isn’t a story about mysticism, alternate realities or futuristic dystopias. This isn’t even a story about heroes really. It’s the story about a mentality and culture in a town that eats its inhabitants whole and about the people (men) that take advantage of that. I try not to spoil big plot movements in the present comic book I’m reading, but it’s hard to write a review about issue #5 without discussing the really big thing that happened in #4. If you want to read the beginning arc (and haven’t yet) this review will be waiting for you once you’re caught up. If you’re staying,

Aiight, you’re still here. After who we thought would be the hero, Earl, takes the splintered end of a baseball bat to the face (in an almost perfect issue #4 mind you) there might have been some optimistic ambiguity if coach actually killed Earl or not. Well…considering this whole issue is about Earl’s funeral, I’d say that question got answered pretty definitively. The narrative switches exclusively to Coach and how he deals with the fallout of killing Earl. Sort of. His firm grip of the town and the respect / fear he commands is the spine of this issue. He’s partly flaunting how nobody will challenge, partly looking down his nose for the shame of the town and their unwillingness to challenge him. It’s a masterful way that Aaron switches from the righteous and heavy hand of Earl to the moral bankrupt and more complex Coach. It’s masterful storytelling and something that that shouldn’t be missed.

Also, the rigid art style just marries the storytelling here. The edges will never be smooth. The characters are hardened with sharp corners and always on guard. The palette also has been of great effect to this point, painting a town that has not necessarily evolved to a full spectrum.

Southern Bastards is another great win for Image who seems to just keep cranking out these incredible, isolated books. If you have room on your pull list for a real world and grounded, yet quite specific story, you should pick this up.