I’m almost to the point where I’m running out of things to say about the flagship book for Marvel’s new Star Wars expanded universe. Granted, there are other solid titles out there like Darth Vader and Princess Leia, but the titular book, penned by Jason Aaron, seems to be the most masterful at tapping into the sense of swashbuckling adventure that we all fell in love with from the start. And in case you thought it couldn’t get any better, Aaron ends up turning things up in a big way this week.

The plot dragged just a little bit in the last issue or two, but things go to a real “turn down for what” kind of place. Luke’s search for answers to the mysteries of the Jedi takes a detour during his capture compliments of Grakkus the Hutt. I imagine that some die-hard fans are going to be a little pissed because he gets some on-the-job lightsaber training outside of Yoda and Obi-Wan, but it’s hard to deny that the situation is so awesome, it’s okay to overlook that. Aaron gets the simple fact that Luke  being in over his head constantly is how he functions so well as a blank slate through which we experience this universe. And then, there’s the most unlikely team-up of Chewbacca and C-3PO hitting the mean streets in search of their lost comrade. This is where Aaron is strong in his strange pair-ups with known characters and letting the chaos ensue. And some reviewers disagree, but I swear to you….Han Solo arguing non-stop with Princess Leia and his maybe/maybe not estranged wife, Sana, in the middle of a dog fight with half of the Imperial Army….that will NEVER get old. 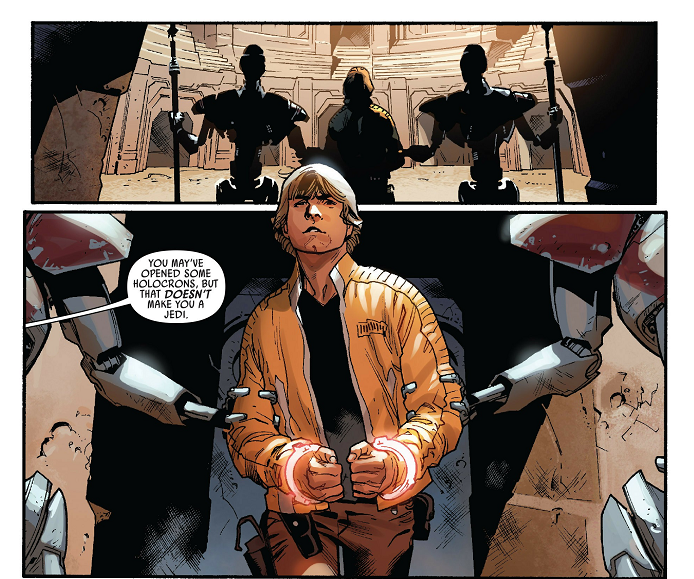 Visually, if there’s a grade beyond A+, Stuart Immonen has surpassed it by light years. I mean, the man was BORN to do lightsaber action and delivers it harder than a blow to the head. And his dogfights are utterly intense to watch. Last week, I said that Immonen might be starting to outshine Aaron in this book. This week, there’s no “might”. It’s happened.

Bottom Line: At this point, this is one of the most consistently clean written books in the game. If you’re reading these reviews and you’re not reading this book, I’m going to start questioning your commitment to this relationship.

Reading Star Wars? You can catch up on previous reviews here.