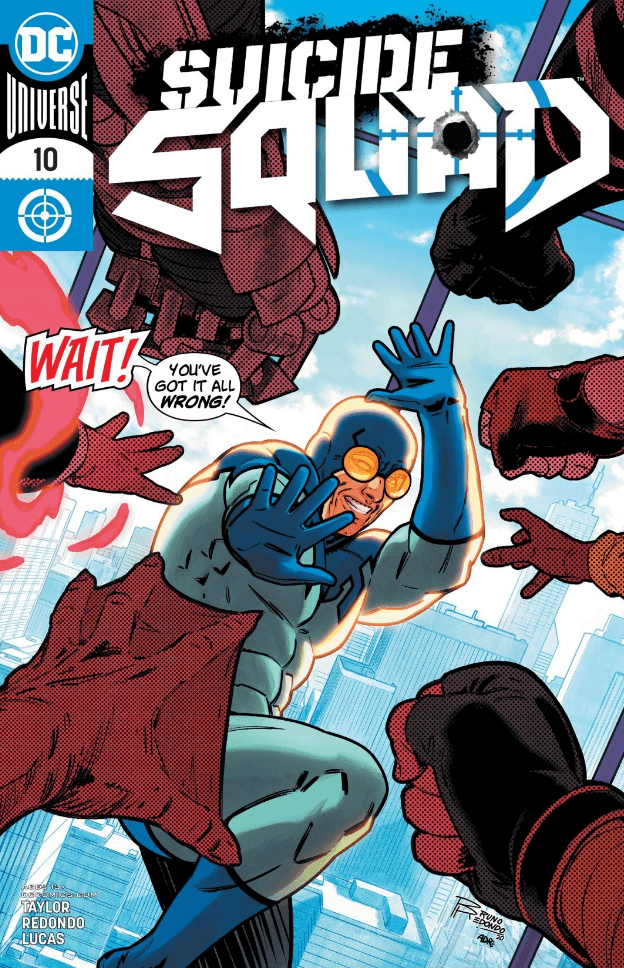 Okay, so maybe there is a billionaire out there who can be trusted after all. But only because they’re also a superhero and have a long, well-documented history of fighting for the greater good.

I’m not talking about Bruce Wayne, either. (Although issue #10 of Suicide Squad definitely makes a tongue-in-cheek joke at his expense.)

I’m referencing Ted Kord, who the members of Task Force X were originally convinced was evil and planning on destroying an entire island and ending countless lives. In this issue, however, they found out that this was all done by Black Mask who has gained the ability to take on other people’s appearances. (Which he’s not the best at, I must say.)

The creative team behind this issue put in a lot of work to cover a lot of ground in just 22 pages. We got Batman jokes, a Black Mask reveal, a parent/child reunion, and even an emotional farewell.

The latter came in the beginning of the issue, which was drawn so well it practically looked like it was moving, where it’s revealed that Deadshot has been murdered. Despite the group’s various origins, they’ve spent a significant amount of meaningful time together by this point. So when they mourn the loss you actually feel it (or maybe I’m just too sensitive) and when they have to leave his body behind it does the same.

Also, just an (admittedly nitpicky) note. Why did they have to leave Deadshot’s body behind? Half of the team has enough strength to carry three people, better yet one. I get that this is likely laying the groundwork for a later revival, but that moment made me go “waitWHAT?” for a brief second.

The fights and developments that follow this moment quickly bring you back into the story though, as we get to see how this group of dysfunctional anti-heroes manage to come together in an attempt to save the day.