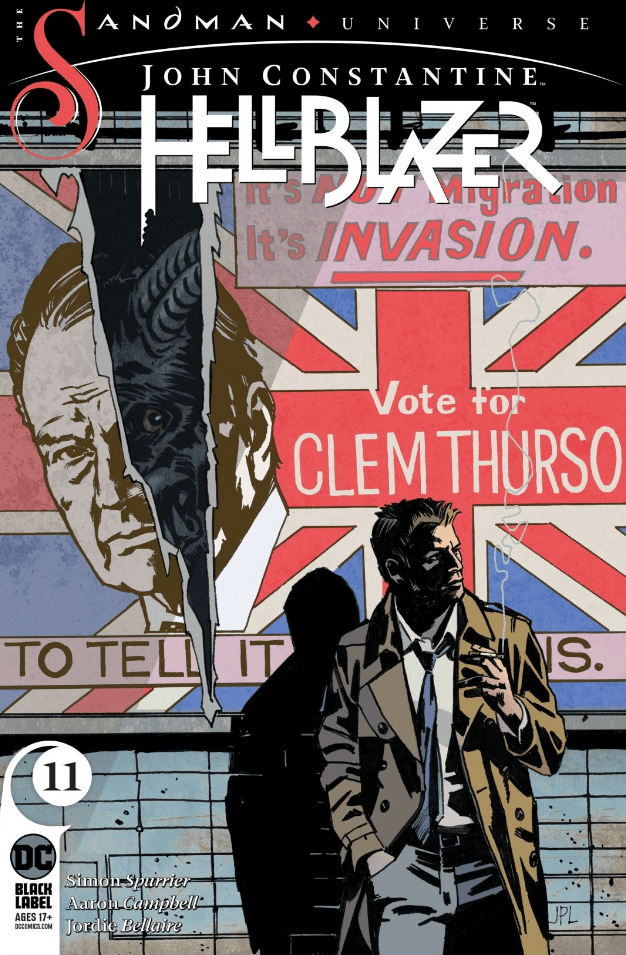 I’m afraid that I owe all of you an apology.

For the past few months, I’ve been reviewing John Constantine: Hellblazer and singing its praises for building out a universe with compelling, gritty stories anchored by its charming and flawed protagonist.

I was so enamored with the story and what it was leading up to that I had no idea it had actually been cancelled and that issue #11 was the penultimate one.

You can read Simon Spurrier’s thoughts on the cancellation here if you need help coming to terms with this like I did.

For now, let’s enjoy issue #11 that had to take on the gargantuan task of unexpectedly tying up 10 issues of build-up while also building up anticipation for the finale.

With all that issue #11 had to accomplish, it didn’t even feel rushed. Sure, a lot happens — we start off meeting the puppet master of the arc, get his entire backstory just to see him die halfway through — but it works.

Given that this is election week for us here in the U.S. of A., it’s incredibly on the nose that the main story of this issue focuses on an ancient being who has fed on fear for centuries, only to find a buffet waiting for it in the world’ current political theater that’s full of racism, nationalism, and a lot of other toxic “-ism”s. Not only is this a huge allusion to the current President — at least in my reading — but the creative team actually blatantly includes the U.K.’s Prime Minister to drive the point home.

It’s revealed that this being has a bone to pick with John, as do many others, and orchestrated a scheme to make his life a living hell. This explains why he’s crossed paths with so many people who have fallen victims to similar kinds of mystical manipulation as of late. There’s even a callback to a former issue to explain why a police officer was in a coma after crossing paths with John.

I’m left to wonder what the creative team was planning out in this series because the turns it takes in this issue alone are wild and you can tell a lot of thought went into them. However, I have faith that an extended 12th issue will more than tie the story in a nice bow and leave John in a good spot for future stories.