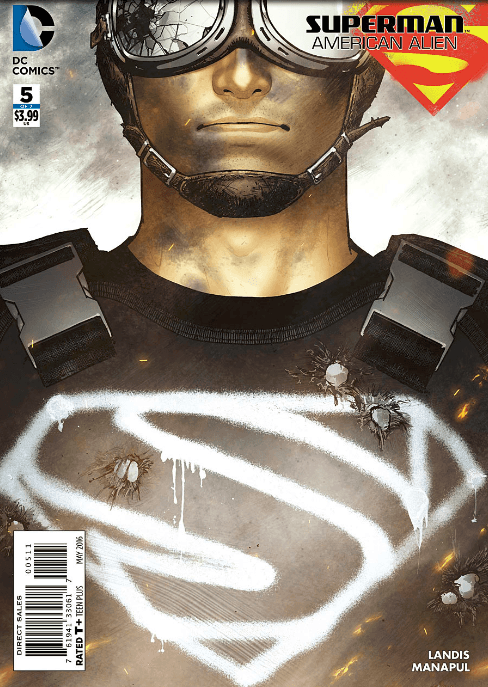 If you’ve been keeping up with this publication in recent months, you know that I’ve been pretty hard on Max Landis’ mini series, Superman: American Alien. But then, given the fact that so far, it’s been a self-indulgent, derivative dumpster fire that borders on Smallville fan fiction, deserving it probably has something to do with it. We’re over the halfway point and the majority of the stories have been so disappointingly blah, the Law of Averages basically demanded the inevitability of Landis having at least one decent issue.

Issue #5 catches up with Clark Kent at 24, finally doing his “mysterious flying man” hero thing… with Batman’s cape on. I don’t know if this was meant to be a troll moment going into the Dawn of Justice movie or if this is the quiet-as-kept asshole we’ve known Superman to be over the years. Both ideas are equally hilarious. This actually leans closer to the “secret history of Clark Kent” we saw more of in Man of Steel, a guy who wants to do the right thing simply because he’s compelled to… but hasn’t exactly thought it all the way through. The main difference is that where Man of Steel was a sullen, deathly serious venture attempting to be soulful, Max Landis (God help me) actually taps into a genuine reservoir of heart and good intentions that makes us love reading Superman stories in the first place. From the way he regards human life during his dust-up with a familiar villain to Lois Lane representing the “everyperson” perspective on our yet-to-be-named hero to Lex Luther outright trolling him even when he’s caught dead to rights.

Landis is at his strongest in this issue because he seems to just write a Superman story, highlighting everything people love about Superman stories instead of indulging his every impluse like a substitute teacher trying to write the Great American Fan Fiction before study hall. Meanwhile, the visuals thus far have been as strong as you would expect from such an assorted Dream Team of artists. Francis Manapul has delivered what is easily the best looking issue of the series. The facial expressions are so clean and defining for each and every character and the action beats are so crisp and detailed, you can almost hear the crashing glass or the screaming bad guys being taken for a ride to jail.

Bottom Line: It turns out that when Max Landis isn’t trying so hard to be controversial and edgy, he writes a perfectly decent book. Who knew?

8 Shirtless Tom Wellings out of 10