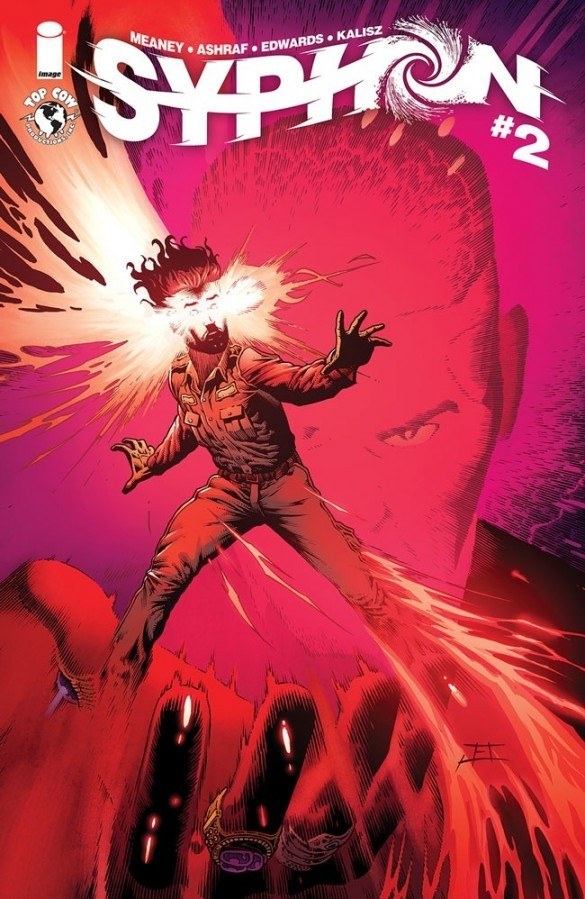 One of my favorite tropes of fiction is the idea of “personality powers.” There are several examples that I could cite ranging from the Planeteers from Captain Planet to pretty much every on My Hero Academia. But the idea is simple enough: one’s personality plays a part in how they manifest power. Much like it makes sense for the hot-headed redhead from the United States to be granted a ring that lets him manifest fire, it also makes perfect sense that a paramedic like Sylas gets the ability to siphon pain away. But as was alluded at the end of the first issue, the ability to siphon emotions has other applications as well.

Syphon #2 starts with an anecdote being recounted to Sylas about a traveler in the desert who comes along a stranger who asks for ratios. Sylas, being the kind empathetic soul that he is, answers that if he were that traveler, he would offer supplies only to be rebuked by his enigmatic captor that such an action would only spell doom for everyone involved. And this kernel of an idea starts the mid-issue of this mini-series in spectacular fashion.

Ashraf and Meaney take this issue to explore other end of the personality power spectrum, which is to say, they examine how powers can impact your personality. Not everyone is like Spider-Man with an intrinsic sense of righteousness, and upon learning that his ability to siphon pain away from others can also be used to siphon joy for himself…well, he does the human thing. He lets himself focus on himself for a while. Ashraf and Meaney deftly examine this social dynamic. Sylas as a medic constantly puts himself at risk to take care of others, but he is also a little bit jaded from the preceding incidents that led him to get this extraordinary ability. It’s a fascinating character study that is juxtaposed against even more wonderful lore.

Edwards’ artwork is perfectly suited for the comic. The ability to show fantastical powers against various backdrops ranging from distant lands to more urban environments is just outstanding and fully encompasses the darkly optimistic mood of the series. It’s truly impressive how Edwards’ art alongside John Kalisz’s colors make the bright sinister and the somber quietly heroic.

Syphon #2 carries all of its momentum forward with a stellar entry that furthers the plot and character in exciting ways. The entire creative team is doing incredible work that is resulting in an enthralling experience.