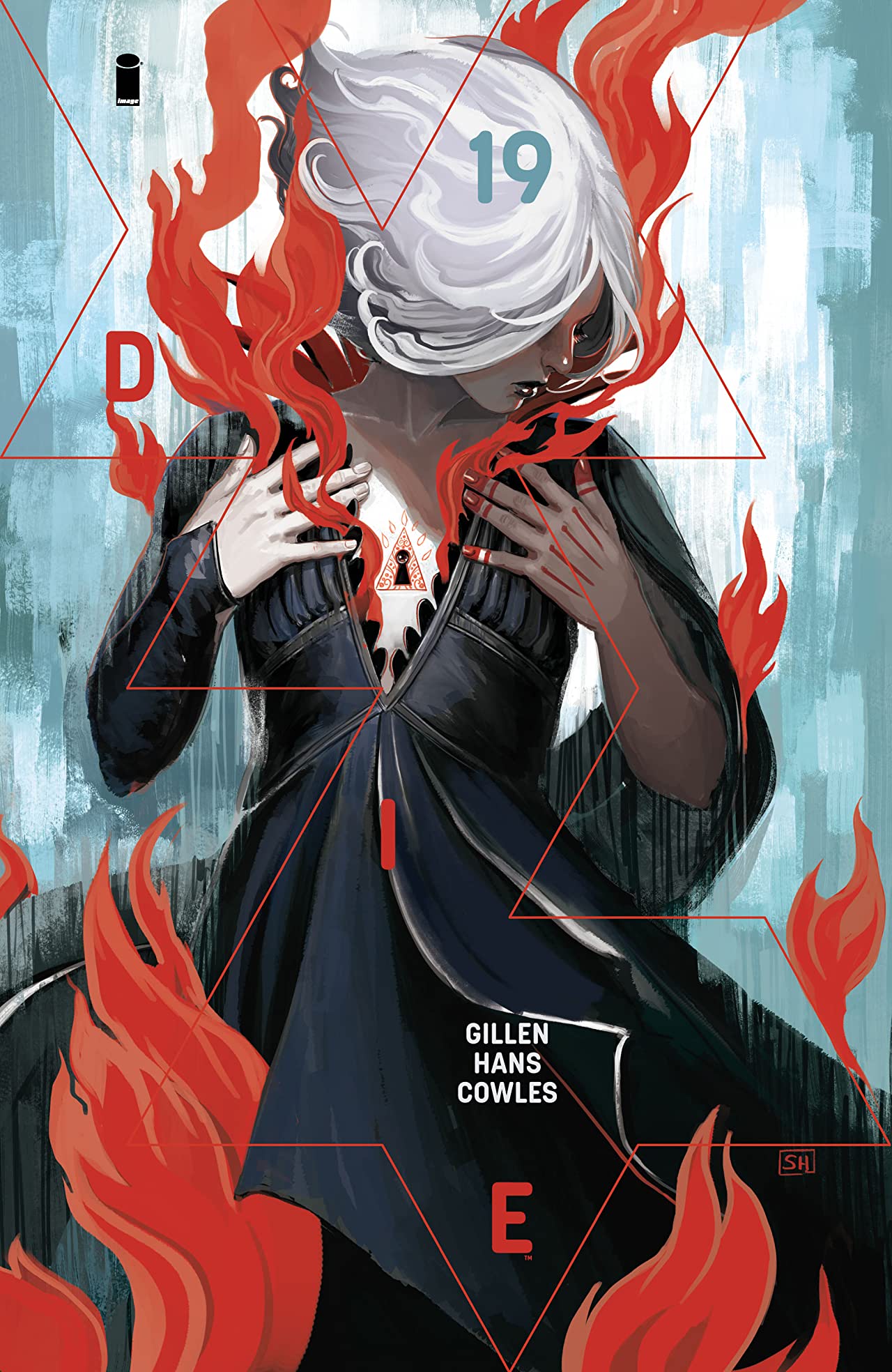 Die ends next month. I am only going to be able to talk about this stellar comic book one more time after I am finished singing the series’ praises in this review. And while the party is more than ready for this prolonged ordeal to be over, I’m not sure I’m emotionally ready to see how it all ends. Nearly three years of suspense, drama, historical references, literary allusions, and some of the most gorgeous artwork from Stephanie Hans is barreling to the end, and the penultimate issue is pulling no bunches as it sets sight on the end.

As revealed in the last issue, the party has crawled to the bottom of the dungeon only to find the giant visage of Ash in all of the old-school biblical angel splendor and magic. This is one of the last obstacles the party has to overcome. However, this boss fight rests squarely on Ash having to deal with it. Or rather Dominic Ash.

One of the things that Gillen has deliberately done with the party spread page at the start of every issue is clearly state that Ash is “Dominic Ash in the real world, Ash in the world of Die.” And it’s a fact that’s almost easy to gloss over considering all of the other wild machinations going on in the world. But Die #19 is the emotional denouement of the whole and is an entirely heart-wrenching issue. Ash must reckon with the very core of their identity that has manifested at the core of the world that is Die. Meanwhile, the rest of the party rallies around Ash as they come to parse through their identity (and explicitly, their queerness as a whole aspect of themselves) to the point where I’m still just openly weeping.

Die from the start has always been an allegory for the things that terrify us the most, the reasons we play games, and the reasons we can’t just play games. And Die #19 delivers on landing the emotional catharsis necessary for the series. Gillen has masterfully written the narration and dialog to capture the complexity of the situation, and Hans brings all of it to life with consistently beautiful spreads and panels. And everything I just talked about was the first half of the issue. There’s an entire second half of the comic dedicated to staging the ending coming in September! How is that not the most exciting development you could think of?

Die #19 is preparing us and the party for the end. You still have plenty of time to get current and read one of the greatest pieces of speculative fiction, maybe ever, just in time to witness the finale. I’m not going to stop thinking about it until it gets here. Die #19 left that imprint on my brain. A lingering command. An echo that refuses to be silent.