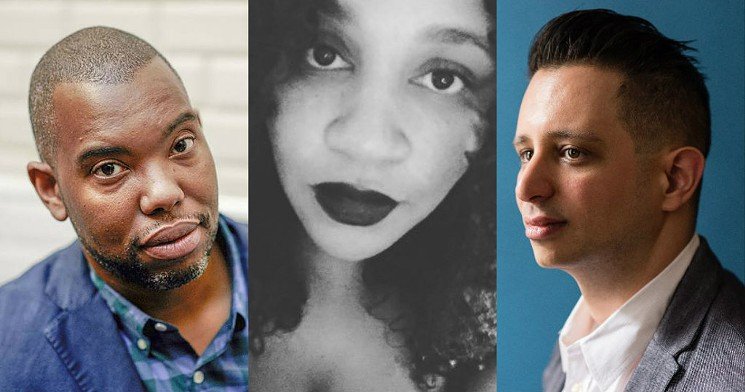 Last night Ta-Nehisi Coates attended his first Comic Con panel at NYCC 2016 and, judging by his facial expressions, it might be his last. The panel, titled in the program Race & Gender: a Conversation with Ta-Nehisi Coates & Steve Orlando, was to feature him, DC writer Steve Orlando (Midnighter, Virgil), and be moderated by Professor Jonathan Gray, but as you might have noticed and raised an eyebrow at the all-male panel, a late addition was added and Miz Caramel Vixen, creator of #BlackComicsMonth, joined the writers and professor onstage. And it wasn’t long until things got weird. And then weird turned awkward. And then awkward turned into Coates eventually hailing a cab in front of me on 37th and 11th avenue having left the Javits Center and running for freedom with the Chariots of Fire theme music playing softly from nowhere. But I’m getting ahead, let’s back up here. Why was it weird?

The panel brought up topics of contention in the nerd community — “diversity” as a buzzword, the “big 2” of Marvel and DC versus independent publishers, who’s allowed to write what types of characters — but what made it awkwardly hilarious was the increasing demand for answers from audience members from a place where answers would not be found. From the first 10 minutes Ta-Nehisi seemed to realize that he, as a powerful voice and a writer for Marvel, was being seen as a powerful voice within Marvel with the ability to storm corporate conference rooms to change Romani representation, greenlight superhero crossover series, and solve every fan’s problems. I felt I could almost pinpoint the moment he perhaps realized he wasn’t talking about comics with other people who loved comics, he was being held accountable for comics by people who were angry at comics.

With the onslaught of attacks against Marvel and DC — two publishers that many of us, including Ta-Nehisi, grew up with and loved — empathetic audience members might’ve wanted to send him a sign, a blink code, something to say “it’s not normally like this” as the tone of “eff the Big 2” — an actual quote of the night — was painting his first experience of the largest convention in his own city. If I were him I would have believed myself trapped in a genjutsu, because how could this be real life? In one instance dialogue turned to Roxanne Gay’s signing as the first Black woman to write for Marvel, to which Miz Caramel Vixen — a long-time supporter of diverse comics — explained why some have suggested it a slight against Black women writers who have been in comics a long time, and that those people found it “shady.” “If it’s shady for Roxanne, then it’s shady for me to be here, too,” Coates replied, not out of anger, but seemingly out of exasperation towards our collective propensity to balk at a Black writer’s success, to make perfection in diversity the enemy of good. And the hits kept coming at Marvel and its new, involuntary-but-de-facto figurehead, along with DC’s analog in Steve Orlando who looked one wrong question away from “I’m just here so I don’t get fined.”

Audience members keeping score could count the number of strategies Orlando and Coates used in response to the recurring discomfort, like rifling through your weapons inventory to see if you have anything that could be effective for a scenario in which you didn’t expect to find yourself. Passivity, directness, and assertiveness were all met with a continuance of negativity to the point that questions were inevitably followed with a 5-second pause while Orlando and Coates passed psychic messages of “you got this one?” One question challenging the decision-making of Marvel, yet again, and shortcomings of art, led to Coates resigning, “I don’t know why anyone reads anything or does anything…” before following up to discuss different people’s motivations for reading and his own internal struggle in quantifying the utility of art. The panel’s success, from my seat, was an exploration in fandom’s diversity of expectations more than the panelists sharing their perspectives on diverse representation in writing.

There’s an old scene from The Simpsons where Bart and Lisa heckle baseball star Darryl Strawberry from the stands. When Marge suggests it’s not very nice the kids reply “they’re used to this sort of thing,” secure in the knowledge it rolls right off their backs as a secret tear wells in Strawberry’s eye. The scene came to mind as Coates hailed his taxi: a professional writer, undoubtedly having faced worse, yet facing the expectations to answer for something much larger than him, than any of us individually, in a realm that was meant to bring joy. I thought of asking to discuss the panel, to hear how he felt about questions he was asked and expected to answer, but the man deserved peace. Creators have a lot to answer for in their work, and that’s part of the fear that debilitates so many from achieving their goals, but that with which any published writer has likely come to terms. What might be unexpected is reaching a level of popularity that your status as a writer is seen to carry more power than what you can squeeze from a pen. And it’s the punches you don’t see coming that hit the worst. Ta-Nehisi Coates will hopefully be in comics a long time, and this experience — strange is it may have been — will hopefully be put into perspective with many more panels to come.