A while back, we here at BNP got a chance to talk with the folks who help forged the magic of Locke & Key. There are no spoilers for season 2 (which you can watch right now and read our review here), so feel free to take a read as we attempted to use the Head Key to learn a little more about the series.

Black Nerd Problems: I guess my first question can be for both of you. I know this is for the Season 2 premiere, but I know it’s also very exciting that there’s a Season 3 in the works. There’s some stuff that happens in Season 2 with the Revolutionary War that got seeded. How did you manage to prepare for Season 3, while still giving Season 2 the adaptation that it deserved?

Meredith Averill: There’s such a rich mythology within the comics, dating back to the Revolutionary War, that tells the story of the origins of the Black Door and the first key being made, how it was made, who made it, why it was made. We have always really loved those stories and how the past is affecting the present in our Locke family, and so we knew we wanted to start telling that story in Season 2 and let the consequences of that affect and move into Season 3. So you’re going to see that be introduced in Season 2, but you’re also going to see it be carried through into Season 3.

BNP: This one’s specifically for Meredith. Between Hill House and Keyhouse, which is the more objectively terrifying house to inhabit and be in?

Meredith: Absolutely Hill House. All those ghosts hiding in corners? Specifically the one on stilts? Forget it. No. No, no, no.

BNP: Not a contest for you?

Meredith: I would rent Keyhouse as an AirBnB any day of the week. Hill House? No thank you.

BNP: You both have had experiences with the horror genre, though, and I know this does pivot a little bit more to the fantasy side, but how do you make sure the horror origins of Locke & Key were preserved with the adaptation?

Meredith: I think it was about choosing our moments to lean into those aspects and not be gratuitous about it, and when you do see a moment of horror or gore, that it’s done in a way that is surprising, is different, and you’re not lingering on it too much, there’s a reason for it. I don’t know if you saw yesterday, but we released a trailer for The Splattering, which is the B horror movie that our Savini Squad is making. Included in that is a clip from Episode 1 of this season, where Eden has, let’s say, a confrontation with a poor popcorn man, and it leads to a moment of horror, a moment of violence. We had a lot of conversations about how much do we show, what’s too much, what’s too little, and what is the tone of that, and I think it landed right in the sweet spot of how far we want to go with the horror of our show. But you’re going to see more moments like that in Season 2, certainly more than we had in Season 1, because we both are huge fans of the genre, but it’s always about finding that balance of horror versus fantasy and wanting to make sure that we’re not leaning too far into that.

BNP: Season 2 introduces a bunch of new keys, as is expected with Locke & Key. Without getting into too much spoiler territory, what’s one of your favorite keys, either from the first or second season?

Carlton Cuse: I think the Head Key is so central to our storytelling, and even more so in Season 2. The Head Key may in fact actually be kind of pivotal in the whole way that this season unfolds and allows our characters to learn some stuff that is very “Holy shit!” for them. So, I think the Head Key is something which has been really fun, and it’s also really, really fun every time we have to then imagine, “Well, what does the character’s head look like?” How do we take this thing which is beautifully rendered as actual, literal illustrations of people’s heads in Gabriel’s drawings, but we have to make that work for television. We have this challenge of imagining the world of the characters’ heads in cinematic terms, but that’s super challenging but also really fun, and I think makes for some of the most visually interesting parts of the show.

Meredith: Yeah, I really enjoyed being able to introduce the Small World Key this season, just as Carlton was saying, I think it’s one of the more visually dynamic keys that we get, especially because it comes with a prop, this amazing life-like model of Keyhouse, which our incredible prop master, Kerry Spurrell, and her team put together. I think that you’ll enjoy, the audience will enjoy, the surprising ways in which the Lockes end up being able to use that key for their defense. And so that was one of the more exciting keys, I think, this season that we got to introduce.

BNP : After years of having a Locke & Key adaptation being in some sort of development limbo for various reasons, what’s it like, not only getting two seasons out, but also getting renewed for a third season to continue expanding on the lore and story?

Joe Hill: I think it’s amazing, and I think it’s a tribute to the talents involved that they made something that was such pure fantasy-horror candy from the start. We had an ace development team – we had Carlton Cuse, we had Meredith Averill. The writer’s room is like the lineup of the 1927 Yankees – they’re all killers, every single one of them. We wound up with a terrific cast across the boards. Even the soundtrack – I know I’m biased, but I think Torin Borrowdale recorded a soundtrack that’s on the same level as the Harry Potter soundtrack. It’s just so gripping and hits all the right tones. It’s whimsical, it’s scary, it’s just lovely. So, I think the adaptation is its own creature completely, and I love it exactly as it is.

Gabriel Rodríguez: Yeah, absolutely. I think the only thing I would add to that is the fact that I think all the delays of the previous attempt of adaptation were the right things to happen in order to get the property landing in the right hands at the right moment. You have the best possible creative team in charge of the show. In a way, the same way as IDW Publishing allowed us to tell the best story possible in comic book form, I think Netflix is allowing the producers of the series and all those involved in it, to tell the best possible TV show of this idea and these characters and mythology. So, we’re very, very happy and excited about it.

Joe: I just want to jump in a build off that real quick, because Gabe just made a really good point about the earlier version, the earlier attempts to bring it to screen. I was thinking once about Carlton Cuse and what kind of producer he is, what kind of TV shows Carlton makes. Because you’ve got guys like…producers get their genre, like Steven Bochco makes cop shows; Dan Harmon makes weird existential comedy. And I was trying to think, “What kind of show does Carlton Cuse make?” and it hit me finally, I finally realized, Carlton Cuse makes hit shows. That’s his genre, is making hit TV shows. And I think that he approached the earlier iterations of Locke & Key as learning experiences. Other people had been turning the Rubik’s Cube trying to make it all come together, and he was able to look at that and say, “We have to twist it like this, and then it will look just right,” and that’s what he did.

BNP: What is your favorite key across, let’s just say the entire franchise, since you two created it?

Joe: I kind of want to change my answer, because I’ve been asked this a few times and I always give the same answer, and it’s so boring, I should really think of something different. The obvious answer is, it’s the Anywhere Key, because it simplifies travel. No more getting to the airport three hours ahead of time, no more passing through the TSA guy, getting hassled by the TSA guy. Just, I can stick it in the door, open the door, step out at Gabe’s house, and me and him can go out to dinner in Santiago, and I can still be back in time to watch The Great British Bake Off on Netflix. I think it would be pretty cool to have the Ghost Key, though. Even as a child, I had this whole obsession with astral projection. I really wanted- It’s a very writerly fantasy, to want to be invisible and see how people are when they’re alone, and sort of be that… Not a pervy, look at him giving me the look like I’m a goddamn perv! I mean, I just, you know-

Joe: You want to see people’s private truths a little bit, to be in on who are they when they take the mask off.

Gabriel: That’s what the Head Key is for, not the Ghost Key.

Gabriel: Yeah. About picking favorite keys, it depends on the context. Certainly, to use one, for me the most useful would be the Anywhere Key as much as Joe, because basically I live far away from everything in the world, and so to have a little extra hand to be able to visit friends more often would be great. But just to have fun, I think the Angel Key would be great, to have just the chance to grab a harness and fly away for a couple hours to refresh yourself when you’re stuck in the middle of a page that you don’t know how to draw, when you’re drawing, et cetera. Now another that would be very useful is the Timeshift Key, that would allow me to stop the day for a couple hours to finish the page and be able to deliver to the editor sometime, that would be great. But then in terms of the creating of the story itself, I think the funniest keys are certainly the Head Key that in a story allows you to do some stuff that’s absolutely impossible to develop in other medium, and I think especially in comics works so well. And the other one that’s sort of a nightmare to tackle in the story, but it, as a storytelling tool, is great, is the Crown of Shadows, the Shadow Key, because basically it’s horrible to have to draw over and over an army of living shadows battering at our heroes, but when you have the adventure finally laid on paper, it looks great. So that would be a little bit of everything depending on the context. That’s one of the things – these keys are fun for everyone, depending on the point of view when you tackle them.

Joe: Just remember that Gabe’s anguish is our pleasure.

Gabriel: And there’s a lot of anguish in making Locke & Key. A lot. 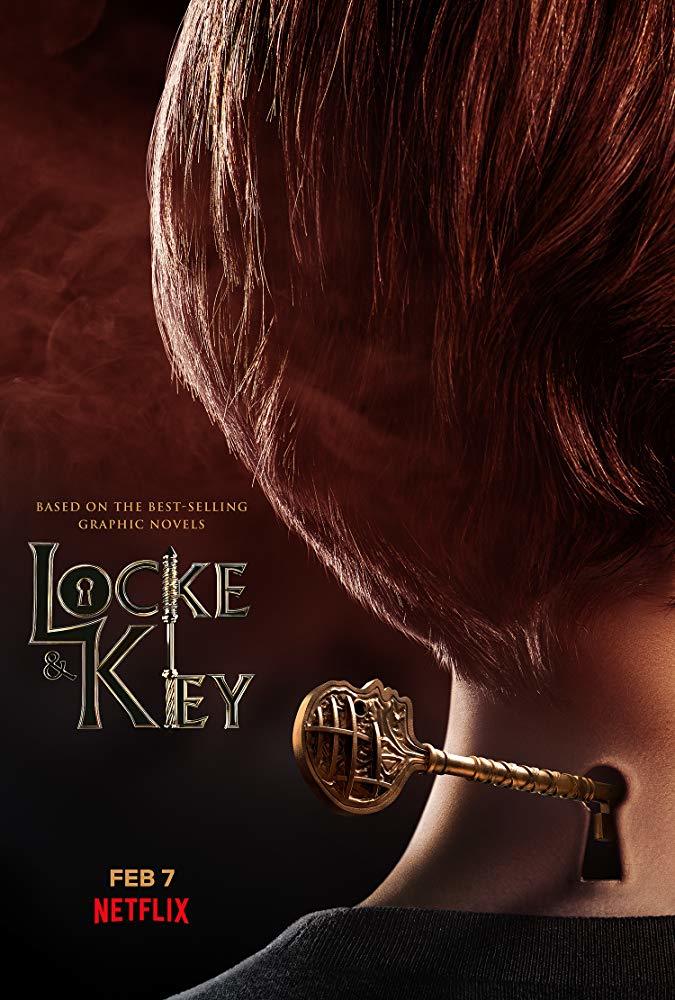