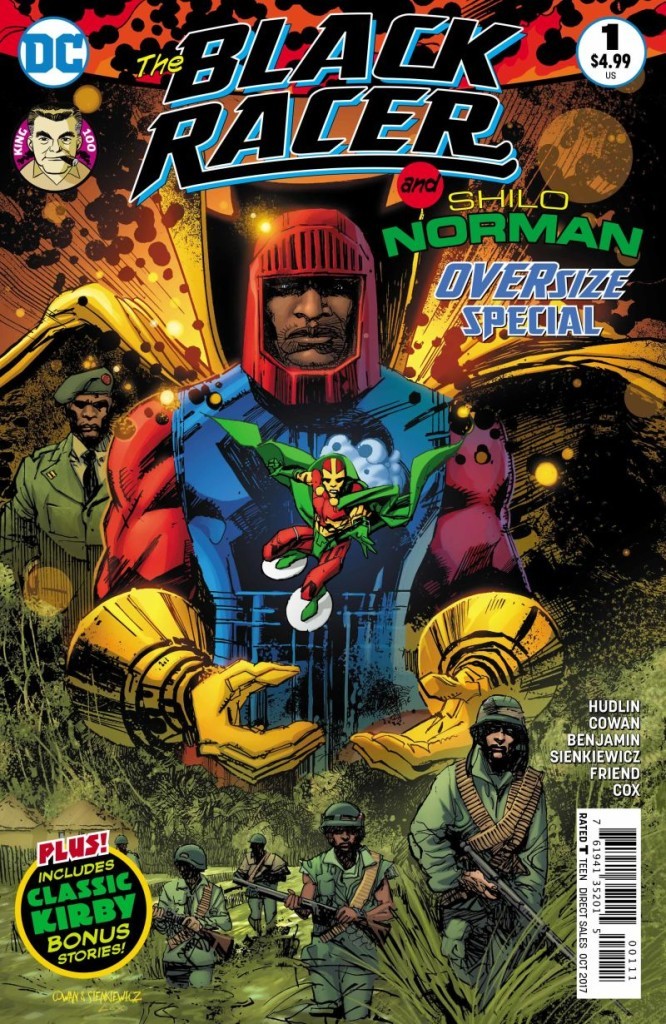 Shilo Norman is donning the Mr. Miracle III moniker again and putting on a show for charity. This guy is strapping himself to missiles (with missiles being aimed on him), while he is tied the fuck down, and trying to escape. If he does, a million goes to charity and if he doesn’t escape.. well they don’t get that money and Shilo is pretty much dead and back in comic book limbo. Keep in mind this is the week of Jack Kirby’s 100th birthday. Mr. Miracle is one of his New Gods creations and he won’t be the only one that appears in this issue either. 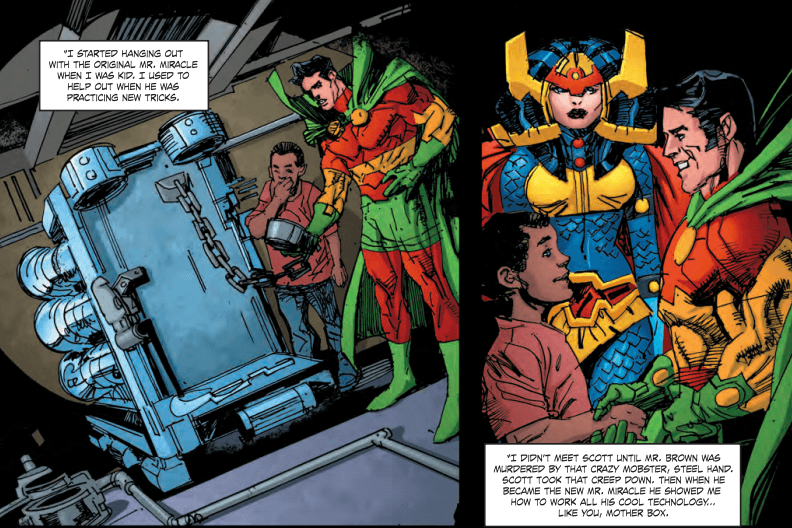 We see Shilo checking over his stunt beforehand and we’re introduced to Genolan, another magic performer that obviously doesn’t fuck with Shilo. We see that from jump and judging by his goatee we can tell he is up to no good. Everything is all good until Shilo sees the Black Racer. The Black Racer is the God of Death for the New Gods. He comes to collect your fade. The fact that Shilo is seeing him means that this is his last stunt. Homie bout to die.

Hudlin is on the track for this issue and I’m fucking with. I love these type of setting where we have a character that isn’t necessarily powerful but good at a trade (in Shilo’s case being an escape artist) and having to use that trade in order to escape a situation. Escaping death is the most dire situation of all, especially when it becomes literal. Hudlin gives us a look at who the Black Racer was before his transformation into this grim reaper-like character. Shilo’s mother box fills us in that the Black Racer was at first a human named Sgt. Willie Walker who served in Vietnam. An incident occurred (via a choice to do what he thought was right) on his visit home that caused him to be paralyzed before a visit from two New Gods to transform him. 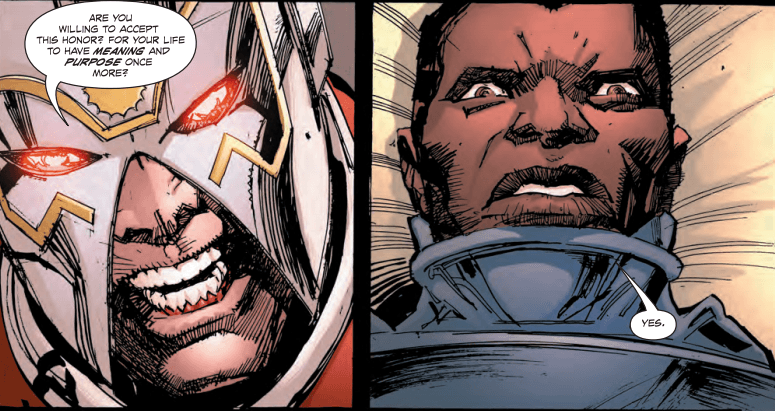 Hudlin’s delve into the Black Racer’s story is excellent and draws the reader in to the mystery of who he is and was. Cowan and Benjamin’s art shines (I feel) the most during Sgt. Walker’s past as he stands as the lone survivor of a shoot out in the field. There’s no stronger visual for a character that’s supposed to be the harbinger of death then that strong foreshadowing and allusion to the moniker he’ll pick up. I am a fan of the interaction between Shilo and The Black Racer as well as we see Mr. Miracle do a crossover on The Black racer that the Motherbox comments not even Scott Free (Mr. Miracle II) was able to pull off. We’re seeing what separates these Shilo as the third man to wear the Mr. Miracle mask and title from his much more famous predecessor.

The story becomes much more than the cat and mouse game as Hudlin, Cowan, and Benjamin give a hard ass scene of the Black Racer and Shilo getting their snowboard / flying skateboard on. The choice of the original outfit for Black Racer could throw someone off, especially with him being on skis (whereas his Kirby counterpart in Marvel rocks a surfboard), a little twist from this creative team made shit hard for modern times. My favorite part is Shilo’s clear frustration at the Black Racer’s persistence.

You know a creative team did a good job when it makes you want to look back for past issues of a character. I was kicking myself for not knowing more of Shilo. I remembered him being brought back in 2005 but had no idea, he too was one of Kirby’s creations back in the 70’s. Arghhh, well this series will make you go on the hunt for more of Shilo and his tenure as Mr. Miracle.

8.0 And1 crossovers out of 10
Are you following Black Nerd Problems on Twitter, Facebook, Tumblr or Google+?
0 Shares