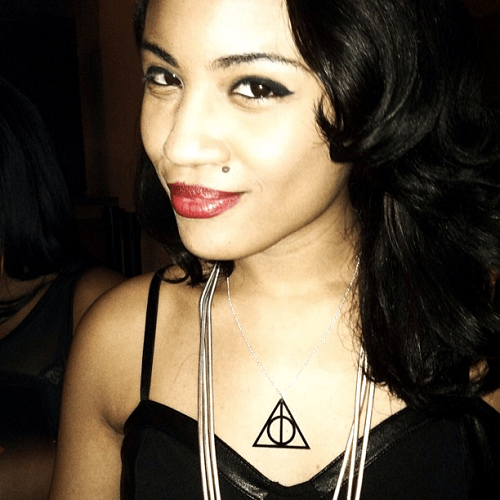 [divider type=”thin”]
For our inaugural Carcosa Interview, we were able to sit down and spill virtual mimosas with nerd extraordinaire and blog queen Jamila Rowser, the creator and sole contributor of Girl Gone Geek. She was gracious enough to take time to talk about being an unabashed nerd, her love of trap music and using strength in numbers to combat sexism in geek culture.

Black Nerd Problems: You recently celebrated the 4 year blogiversary of Girl Gone Geek. What inspired you to begin this blog four years ago? How has your vision or objective for the blog changed in that time frame? Have you learned anything about yourself or about the nerd community during that time that you weren’t aware of before?

Jamila: I wanted to start a blog for a while and since I was already apart of the geek subculture online, I wanted to contribute to it with my blog. I like writing and I couldn’t imagine myself blogging about anything other than geek culture because I have such a strong passion for it. I also started it because I didn’t have many friends that were into geek culture at the time so my blog was a way for me to talk about the stuff I loved.

Girl Gone Geek has changed a bit since it launched. I didn’t have a goal when I started my blog; I just hoped that a couple people would read it. So I didn’t have a real plan or strategy, it was more of a “learn as you go” process. [quote_right]”Writing about things also helps me figure out my own opinions and feelings rather than just sending out a tweet or two about it…”[/quote_right]The vision hasn’t necessarily changed, but it is a lot more focused. I want people to come to Girl Gone Geek and read stuff they can’t get anywhere else. The way I do that is making sure my voice is always present in my writing. I’m not a news blog and I don’t do traditional reviews, but I think that’s what people like, and it’s how I like to write.

Writing about geek culture and my experiences is kind of like therapy depending on the topic (like when I talk about death, relationships, etc). Writing about things also helps me figure out my own opinions and feelings rather than just sending out a tweet or two about it.

BNP: You profess that you are a military brat, which I assume means that you moved around a lot due to a parent being in the military. How did you come to settle in New York? How do you think your location has played a role, if any, in how you occupy the nerd community?

J: I’m a proud Air Force Brat! When I graduated high school I was living in Germany and I picked New York for college because I have family here and my parents were still in Germany. Both my parents are from the Bronx but they met when they were in England. Also, NYC is the only “home” I’ve had that didn’t move every three or four years, so I’ve adopted it as my hometown.

It’s fun being a geek in NYC because there is always something going on. There are tons of events and meetups to attend and awesome places like The Way Station (aka the Doctor Who bar). Then of course there’s New York Comic Con which I go to every year.

BNP: As a hip hop head and a committed nerd, it’s hard not to love the Straight Outta Gotham Tumblr. As evidenced by people like us and the rappers that are quoted on that Tumblr, there seems to be a natural marriage between Hip Hop and Geekdom. What made you start that Tumblr? How has it felt to see it grow in popularity? Is there any rap artist you get submissions about more than others?

J: I was cleaning my room one day listening to “Knuck if You Buck” by Crime Mob for the millionth time because how can you not?! And there’s that line, “Jumping off from on the stage, throwing bows like Johnny Cage”, that always gets me hype because of the Mortal Kombat reference. I knew I wasn’t the only one who loved hearing geeky references in rap songs so I wanted to do something with them. I’m no artist, but I can make a meme and GIFs! I stopped cleaning my room (because I didn’t want to do it anyway) and started the Straight Outta Gotham tumblr and that line was my first post. It’s really exciting to see it grow and people get a kick out of it. I definitely freaked out when Complex posted about it. There are definitely regulars on Straight Outta Gotham. Wu-Tang Clan is full of geeky lines, especially Ghostface and RZA. Childish Gambino is a self-professed blerd so that’s a no-brainer. Robb Bank$ is on my blog a lot, to the point where I have to spread him out. He’s underground and his sound is kind of trap which I love because he does these really specific anime references you wouldn’t expect from someone talking about drugs and sex. There’s also Odd Future, Lupe, Denzel Curry, MF Doom, Jean Grae, Pharoahe Monch, Eminem and Royce da 5’9” on there a lot.

BNP: I think one of the most fascinating things about your blog is that it isn’t simply fandom or some critique on something nerd related. Instead, you have a number of posts that provide a social commentary or relationship between the source and the human condition. One of my favorite examples of this is your post “How Hawkeye #13 Helped Me Deal with Death.” How do you feel about comics or other nerd related mediums for entertainment being in conversation with the tropes of everyday life? Have you always seen the importance and relevance in these art forms relating to the human condition or was there a specific moment where you had this epiphany?

J: Mainstream society can easily accept someone connecting to a work of non-genre fiction or film in a meaningful way, but once you add art, fantasy or sci-fi it’s harder for some to understand. Most of that is due to ignorance or stereotypes of what they think comics, games and animation are about and who they are for. We of course, know and appreciate the significance. I like to use my blog to show not just the fun side of geek culture, but the meaningful ways it can impact someone’s life.

I’ve always seen the importance of these art forms, but I think I’ve had little epiphanies along the way because of specific events in my life. But I think the first epiphany I had when I was young and watching Princess Mononoke for the first time. San was nothing like the Disney princesses I knew and I loved her for it. She showed me that I could be strong and fearless.

BNP: I think we can say that you are an avid cosplay participant. Our own BNP contributor Lauren Bullock does a monthly feature on people (especially women) of color who cosplay while detailing some of the challenges, motivations and micro-aggressions that they endure. How did you begin your personal journey in cosplay? Have there been problematic situations for you in this activity? Have there been any reactions that pleasantly surprised you since you began?

J: I wouldn’t say I’m an avid cosplay yet, because I think I need a few more under my belt, but I plan to get there some day! But I am a huge fan of cosplay. My first cosplay was gender bent 11th Doctor from Doctor Who and I’ve also done a gender bent Spike Spiegel from Cowboy Bebop. I haven’t received any negative comments (so far). I do have friends who have been harassed while in cosplay. I’m harassed daily on the streets of New York, so I’ve been there (except not in cosplay).

People on the internet have said I should cosplay as Martha, the only black companion in Doctor Who, basically because I’m a black woman. I don’t think they meant harm when they said that, but it does insinuate that I should stick to my race when I cosplay. If I only cosplayed black female characters I wouldn’t have a lot to choose from, but that’s another issue in itself.

BNP: You recently launched an exciting new venture “Geek Girl Brunch.” Please tell us exactly what Geek Girl Brunch is, who’s involved and what inspired it.

We have plans to make Geek Girl Brunch international, so if you’re interested in becoming an officer for your town or city you can email us at [email protected]!

BNP: Admittedly, your gushing over East of West pushed me over the edge to finally pick up the book and I love it. Are there any other comics or mangas that you wish people were paying more attention to?

J: So glad you love East of West! I am like a disciple for that series. Another series I love is Nowhere Men, story by Eric Stephenson, art by Nate Bellegarde, coloring by Jordie Bellaire and lettering by Fonograpiks. I made sure to list everyone because each person really does add to the series in a wonderful way. It’s a smart sci-fi story that pushes the boundaries of morality for the sake of science.

Rat Queens is also a new favorite of mine by Kurtis J. Wiebe and art by Roc Upchurch. It’s been described as, “Buffy meets Tank Girl in a Lord of the Rings world on crack!” So what’s not to love?! Also a huge fan of Ronald Wimberly’s Prince of Cats, it’s one of my favorite graphic novels. It’s a reimaging of Romeo and Juliet but it’s from Tybalt’s POV and takes place in Brooklyn during the ‘80s. I recently read mangaka Inio Asano’s Solanin and Nijigahara Holograph and fell in love.