This year marks the 90th anniversary of The Original Harlem Globetrotters. They started playing ball on the south side of Chicago in 1926, taking Harlem as their home city because it was the Blackest place anyone could think of at the time. Greats like Wilt “The Stilt” Chamberlain are counted as honored team members. The team has traveled around the country, and the world, demonstrating their skills, where they’ve inspired and enlightened arenas full of people of all races. It is almost unthinkable, in retrospect, that the team would still be around in any form, let alone one close to their original intent. I recently saw their show again for the first time in many years. The experience has left me nostalgic, critical, and appreciative all at the same time. I have rosy memories of seeing the Globetrotters with my family as a kid. It always felt like my parents were out working, maintaining that suburban life was rough then as it is now, so our family outings loom large in my rear-view. My dad took my sister and I to see the Harlem Globetrotters year after year. I remember the Richfield Coliseum outside of Cleveland, the crowds, the popcorn, the all-Black Globetrotters beating the snot out of the Washington Generals…even at ten years old I knew that was special. No team of Black men beat a team of white ones and walked away. But the Globetrotters did, every time.

Not only did they beat the white ball players, badly, they helped Shaggy and Scooby solve mysteries. They showed up on Gilligan’s Island and The Love Boat. On their own show, they had their own magical van that they used to find villains, whom they then defeated in games of basketball. I could have identified Curly Neal and Meadowlark Lemon on the street like I knew them. They were as ubiquitous to my childhood as Marvin Gaye and cigarette smoke. 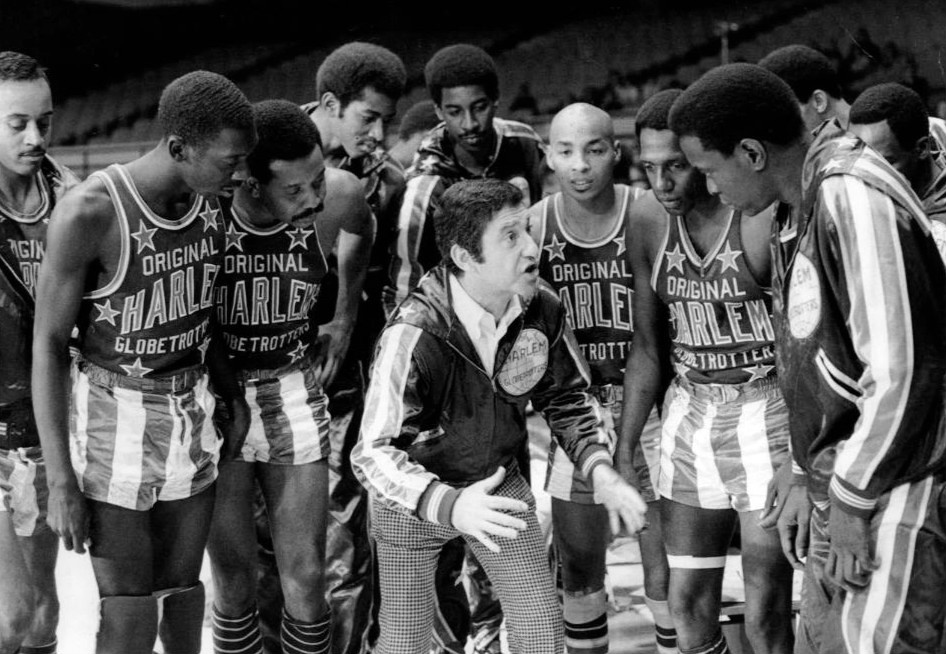 As I grew older, and traveled my own phases of racial consciousness, I had a period when I was ashamed of the Globetrotters. Their shucking and jiving act rang for me too strongly of a minstrel past that I didn’t want to know about. Even while they were winning, the goofiness with which the characters approached the game, grinning at the white referees and pretending to steal kisses from the white girls in the front row, was too much. I wanted to keep the spectacle of Black men at play out of the public eye. It was one thing to laugh at their antics with my family, something else to know that my white neighbors were laughing too.

My own support of respectability has passed, and with it these judgements. Yet and still, there were too many moments in the show where the jokes were premised on the assumed homophobia of male members of the team or audience. There are ways to poke fun at the sexual attraction of a person that aren’t built on harmful stereotypes of appropriate male friendships. The Globetrotters have done a good bit of work modernizing their jokes, but this is one area where they still have a ways to go.

Harlem Globetrotters have become synonymous with winning. Night after night in the most awesome ways. And watching them play now, I see so much more than I used to. It is a hilarious act, a purposeful re-enactment of a Black Vaudevillian past, elaborately timed and perfectly orchestrated by the team captain, the MC of the game. The show is premised not on foolishness but entertainment — you have the strong sense that the team mates are entertaining themselves, that they love the game even as they bend its rules. And at this point, the players grew up watching earlier Globetrotters play, practicing spinning a ball on their fingertips and rolling it over their shoulders.  It is Black joy on stage — and I don’t have to caveat that as Black male joy any more as there are now Black women in the troupe, and they can fly.

Putting it all in context, the Globetrotters started playing basketball 25 years before Black men were allowed onto a NBA court (that was Chuck Cooper, by the by). It is hard to imagine now that a game that we so thoroughly succeed at, at one point had no Black players at all. And the original Black players, like Chuck Cooper and Nat “Sweetwater” Clifton, were Globetrotters first, and league players second. The team made their name beating all-white teams with grace, style, and humor. Their uniforms and basketballs are icons of Black America’s love affair with basketball and with a particular brand of comedy that is both unique to our culture and fundamentally American.

It was all of this skill, joy, and showmanship that my father shared with me, and that I’m now sharing with my kid. I went to the show for nostalgia and left with an appreciation of another of our cultural works, how those works are sustained, and how they sustain us in turn.