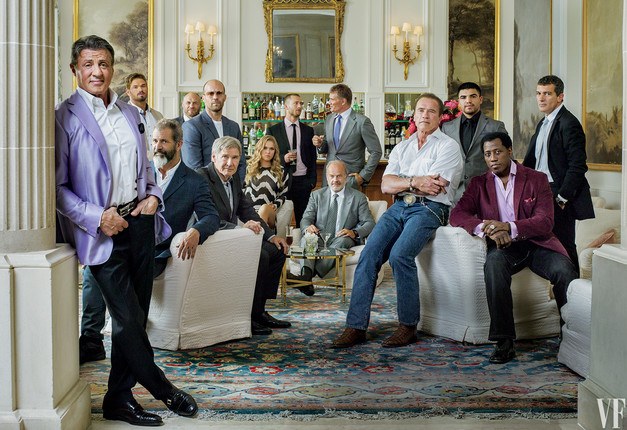 Sylvester Stallone is on a mission and at the apex of his Hollywood powers, he’s taking a play out of Clint Eastwood’s book and the results are projects like The Expendables trilogy that couldn’t be any less Stallonesque in action and explosion (take note Michael Bay). Sure he’s stacking his cast with the heavyweights of action movies like Statham, Ford, Schwarzenegger and Snipes, but the outcome is something that audiences of action movies might be a bit surprised at: I care about the characters in The Expendables 3 (all fifteen hundred of them).

The Expendables 3, for the most part, succeeds where Schwarzeneggar’s Sabotage fails. While Sabotage revolves mostly around Schwarzenegger’s mystique as a plagued action hero, the rest of the new comers around him are largely forgettable. Stallone trumps this trope with his selected few new comers both to action movies and The Expendables franchise by doubling down on the already star studed cast with Wesley Snipes, Harrison Ford, Antonio Banderas and Mel Gibson.

The movie opens up with all guns-a-blazin’ (pun intended) for an action sequence that lasts probably for the first 30 minutes of run time. We’re introduced to Wesley Snipes’ character who’s been in prison for the last decade. I’m by no means any sort of soldier of fortune or even ever did any stint in the military so I can’t speak to those relationships but I can say that if I spent that amount of time on lock down in a foreign country and Stallone waits until the third installment of the movie franchise to finally rescue me, there’s gonna be a bit more than words exchanged.

We’re then taken straight into the team’s first mission of the movie where Snipes’ character shows off his knife throwing and Parkour skills. The team busts up a few vehicles, caps a few bad guys and warms the audience up with a couple explosions leading to the reveal of this installment’s bad guy, Mel Gibson. Gibson’s character is introduced in awesome fashion and throughout the movie Gibson delivers a truly sadistic and believable performance that sets the tone for the ultimate final showdown between him and Stallone’s character. Gibson closes this sequence by sniping the shit out of Terry Crews’ character almost killing him. This leads to Stallone breaking the team up rather than risking their lives going after a dude who clearly will be a vengeance kill in the end. Enter the rookie action heroes.

This is the biggest let down of the movie. The cast that makes up Stallone’s new team is boring, forgettable (did I mention that already?), and as bad of actors as Stallone used to be when he first started making great action movies. These guys almost suck the life of the movie, luckily Banderas is there to quell the pain a bit. Banderas’ character is the last surviving member of his team and is eager to join up with Stallone’s new crew and get back to the mayhem but the problem is that he’s too old and a bit of a nuisance. He provides the excellent comic relief and also happens to have one of the more touching back stories that allows the audience to both laugh at him and feel sorry for the guy at the same time.

Stallone’s new crew quickly gets themselves captured and of course the old team returns to bail him out. After this, the weakest sequence of the movie, passes, the movie picks back up quickly and rolls into the epic final showdown where Mel Gibson’s character literally pulls an entire army, with tanks and helicopters and a general, off layaway. The results are an incredible finish to what we all came to see in the first place, action heroes doing ridiculously unnecessary shit to defeat the bad guys in a grandiosely roundabout way.

The Expendables 3 is your typical summer blockbuster that will get your adrenaline going and entertain if you walk in knowing what you’re there for. DO NOT go to see this movie if you’re looking for a deeper meaning in life. Stallone continues to prove that he knows action and he knows what his audience wants from him; I hope he doesn’t start casting rookies in every one of his franchises from here on out because he won’t always have 20 other action heroes there to save the movie in a big way when those kids show us their worst acting techniques. The Expendables 3 opens up tomorrow August, 15th and is well worth your money.