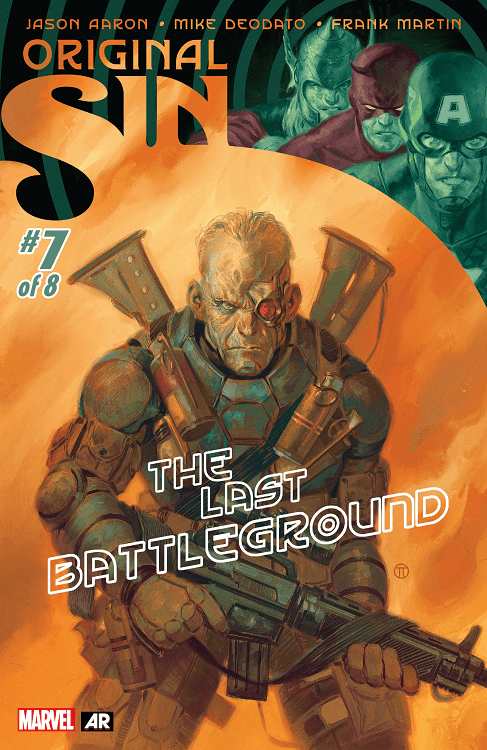 The penultimate issue of the Original Sin story line gave us some revelations, some more freakin questions and some cool space combat. Nick Fury has fled with both of the Watcher’s eyes into space which leads to his battling with the Avengers well above the Moon’s surface The action is good (especially in how its drawn) and satisfies the action junkie jones a bit, but the story still leaves wanting, even though this has been a more solid effort than some previous installments. It’s kind of cool and simultaneously eyebrow raising to see Nick Fury dismantling Earth’s strongest heroes like this. It reminds me of when Deathstroke took out the Justice League in Identity Crisis except Slade Wilson wasn’t like 100 years old and he was fighting against the Justice League “B” team. At any rate, the biggest take away I’m guessing will be the one that spooked Thor and sent his Mjolnir hurling into the Moon’s surface…without him. As we know what is coming for the God of Thunder book (also written by Jason Aaron), that may prove to be a cool lead in…when we figure out why it happened.

Ultimately, I’m left reading this book and thinking…what exactly is the point again? The Watcher has been a cool and ominous character for a long time, so his death is impactful, but holding all these secrets close to the vest over seven issues just kind of makes me fatigued to know why this should be so important again.

This installment of Original Sin was stronger than most, but still doesn’t hit the notes we would expect with so many heroes in it. The title has been teased out with all these secrets in the Marvel Universe, but hasn’t really gave us that many. Hears hoping we get the lion share of them in the finale.