I’m not sure if you folks are aware or not, but living in New York City is expensive. Rent here will have you feeling like they are charging for air as a utility. If you want to move you have to take into account location, whether it’s near a train stop or a bus, whether the nightlife is loud on weekends. Then sometimes you have it so good with the location you’re at that you don’t want to move despite that rent racking up numbers. This got me thinking about all the shit you’ll tolerate for a place with a great location.

Now imagine if you lived in a fictional city like Gotham. Picture the person that lives directly across from the where the Bat Signal is set up. That obnoxiously bright light beaming through the windows damn near every night, ’cause you know the crime rate in Gotham doesn’t take a day off. They have to be throwing the comforter over their head while saying to themselves,

[divider type=”space_thin”]
Which also got me thinking: what fictional city would I tolerate living in? In what place would I feel most comfortable? You’d think this would take some time but I already know in my fanboy heart of hearts — I gotta go with Metro City from the Final Fight beat ’em up video game series on Super Nintendo. It’s a city, it’s bright and vibrant, they’ve got a great public transportation system set up. The only real downside has to be the crime due to the Mad Gear Gang trying to run the city.

But the crime just has to mean that rent is probably cheap. I don’t know about you, but I could tolerate fucking up some dude named “Street Punk #2” on my commute to work on a daily basis. That’s a workout in my book, but aside from that Metro City is a great place to , , put your stuff somewhere and live. Don’t take my word for it though, look at the brochure. 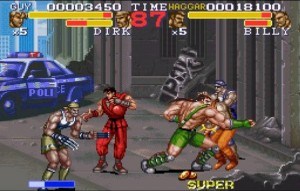 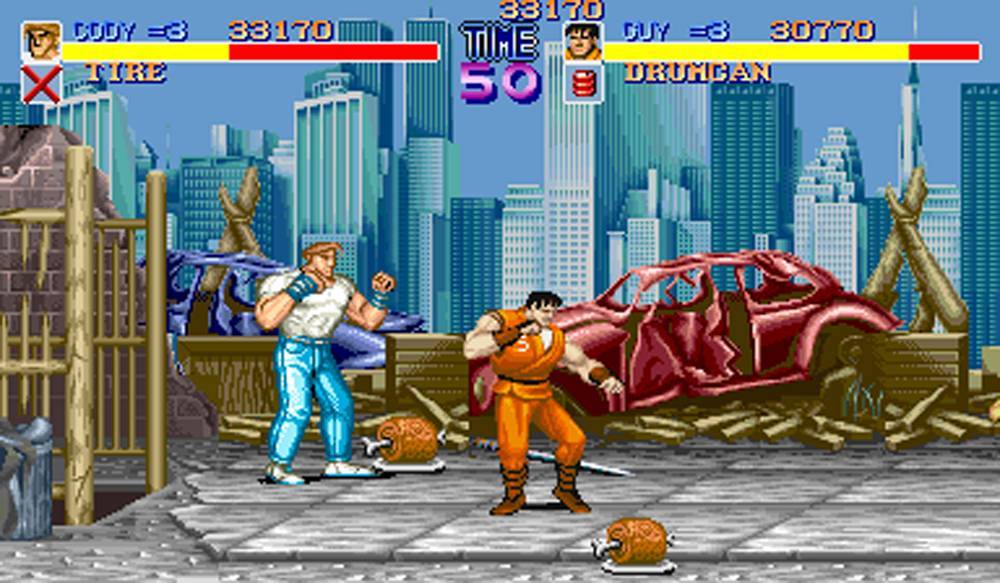 That’s prime real estate, how could you not invest in a place there? Never mind the fact there are knives, pipes, and extremely rare and expensive Muramasa blades that people leave lying in the streets. Or that they actually labeled a section of the town “Slums” (that’s a PR issue, for sure). Or that somebody is out here baking whole turkeys and just leaving them on the street for no reason whatsoever. Don’t focus on the negative, focus on how spacious those apartments must be.

Also, you don’t have to worry about crooked cops or a police force at all because a former Street Fighter and Pro-Wrestler from Slam Masters, Mike Haggar, is the Mayor, and his nine to five is spent beating the ass of every single Mad Gear Gang member day in and day out. Let me repeat that: the people of Metro City elected a dude from the Street Fighter franchise that then became a Pro wrestler in the Slam Masters wrestling video game to be the Mayor of their city. The man literally clocks in just to beat ass and goes to work in his wrestling attire. 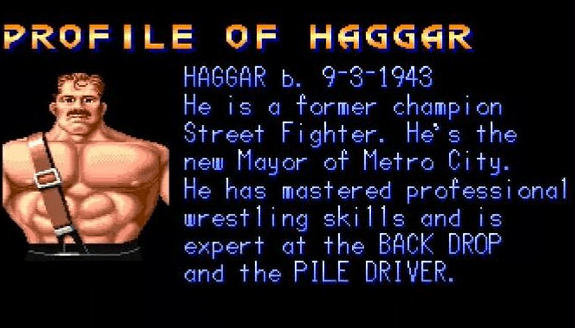 Now, I can’t tell you how Mayor Mike Haggar is handling Metro City’s budget, what he’s doing for education advancement, taxes, equal pay, prison reform, health insurance policies, or weekend subway construction. What I can tell you is that the city is a better place because day in and day out, on your commute to work, you can see Mayor Mike Haggar really in the streets fighting the Mad Gear Gang and literally pile driving gang members so hard that their body starts blinking and fading in and out of the physical plane of existence until they disappear entirely.

That might sound unreasonable to some of you, and to others that might sound like this man is somehow capable of driving a human body with so much force to the ground that he is able to somehow transcend the laws of physics, but you know what that sounds like to me? Utilities included in this affordable rent up in Metro City. Now I’m not saying Mike Haggar’s methods aren’t a bit extreme, nor am I saying that perhaps folk in Brooklyn should take Mike Haggar’s approach toward hipsters moving into their neighborhoods and gentrifying the local community and ruining businesses that have been staples in that environment for years by pile driving them so hard that their body Marty McFly-fades away; I’m just saying…

…that rent and walk-in closet space in Metro city doe.