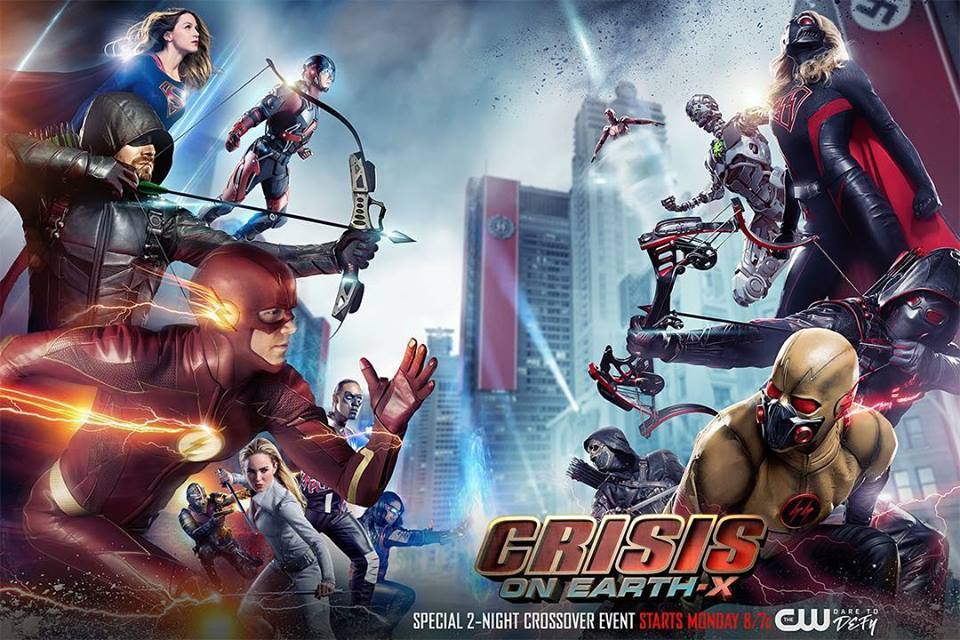 And you say Crossover City!

Supergirl and Arrow set-up our episode of The Flash by showing us a Nazi-run world with Dark heroes. Dark heroes who then invade Earth-1 during the wedding of the world’s most perfect couple. The gang’s all in attendance when Dark Arrow, Overgirl, Prometheus, and their guaranteed-to-get-bodied foot soldiers show up to try to murder some real heroes. IT. IS. BEEF. ON. SIGHT!!!

Can’t lie, the chapel battle featured some of the finest action any of the CW shows have seen. The director of this episode, Larry Teng, knew how to utilize all of the heroes to the maximum. Kid Flash’s quickness was amazing, with homeboy catching bullets and returning them thangs to sender with insane precision.

Cisco was out here breaching Oliver to the rafters so he could put that quiver work in. Firestorm lightin up the whole bulding. Alex and Sarah had some of the illest tag team fighting skills, moving effortlessly with each other after their late night of fun and morning of falling out bed. Heatwave and Killer Frost were out here looking like the most unlikely prom king and queen of all time, but COT DAM if they wasn’t puttin that work in! Caitlin whipped out the ice lightsaber and was SLAYING!!

Kara, in her cute ass pink dress, was out here tossin the hands with this evil flying version of herself. Our heroes fight them off, with the help of Supergirl’s massive hand clap that takes out the evil Kryptonian and company, but it also knocks Cisco unconscious. He was out for the whole damn episode.

After the fighting is resolved, we find out that Earth-X Prometheus is actually Tommy Merlyn, which is apparently a big deal if you’re still watching Arrow. Then our team finds out these evil versions of themselves are being aided by Reverse Flash of Earth-1 who is looking for a prism that could create a neutron bomb…or worse.

In the next confrontation, death and destruction fall on all our Superfriends, who are captured by Reverse Flash, Overgirl, Earth-X Metallo and their henchmen. Dark Arrow storms S.T.A.R. Labs, beats the brakes off Heatwave, Killer Frost, and all of Arrow’s mans and dem, who show up late and get slapped around immediately.

At this point, we find out that besides the whole Nazi Fatherland thing, the Dark heroes have invaded for practical reasons. Earth-X Kara is dying because she has absorbed too much solar radiation (All-Star Superman shout out). The Dark heroes plan to steal Earth-1 Supergirl’s heart by using the prism (the one they don’t yet have) to create an artificial red sun. This will weaken Kara so they can do the heart transplant. They take Kara to prep for surgery and dump Barry, Oliver, Alex, Stein, Sara, and Jax off at a gloomy Earth-X internment camp to wallow in fascist agony.

The team looks around and notices that each prisoner has a shape sown on to their clothes to identify their crime. After asking a soon-to-be-new squad member about his pink triangle, they realize this reality is as bad as it ever was. Of course high-ranking Nazi Quentin Lance appears and rounds up our heroes and their new friend Ray Terrill for the firing squad. Sarah stares at her doppelganger dad in disgust, even as she reps her fluid sexual preference despite impending death.

Right before the squad opens fire, Captain Cold aka The Flash villain GOAT aka they tried to trick the fandom, pulls up and and lets the Mr. Freeze yopper go like final season Samurai Jack! He saves the team and sets Ray the bae free. Yes, The Ray and Captain Cold are an openly gay couple during this 2-night Crossover event! Homeboy got the Leroy Glow as he flies up and starts torching the camp and Nazis in droves before the Superfriends escape to Star City of Earth-X. 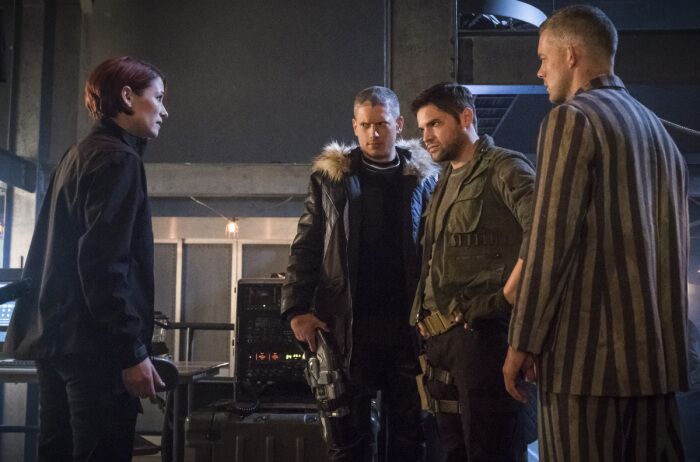 Wouldn’t you know it, the most unexpected member of any of our superhero teams winds up being the general of the rebel forces. Winn Schott y’all. Supergirl’s version of Cisco (but much nerdier and much weaker), General Schott ain’t playin no games! They have a plan to blow up the stabilized breach that the Earth-X Nazis use to hop between worlds and the General will not be swayed. Not by the heroes and not by Alex talking about how close they are on Earth-1. Captain Cold and The Ray convince the General to give the team an hour to get through the breach before Red Tornado blows it to smithereens. All they gotta do is get past a hundred armed guards, tigers, proximity mines, a golden gun, the latest iOS update, and The Riddler. Then Oliver remembers he looks just like their boss and they sneak in with ease.

Meanwhile, Flash and The Ray are having some trouble slowing down Red Tornado, who has been programmed to wipe that breach off the face of this shitty Earth. They get demolished in a whirlwind of embarrassment until they come up with the genius idea to, wait for it, work together! Flash speeds ahead to charge up his Flash Chidori and Ray gathers up all the light he can muster and they launch a spectacular tag team attack that hits Red Tornado with the KO.

Once on the other side, Oliver Queen does an excellent job of portraying an Aryan-race-loving Fuhrer by commanding the troops to send their Nazi Waverider through the breach as scheduled. He even tosses up the Heil like HOV throwin up the Roc sign in ’02. Nazi Lance is about that super sleuth life though. He tries to make sure The Man in the High Castle is actually an ethnic cleansing dictator by bringing out Earth-X Felicity for execution for breaking some undisclosed rule. Oliver doesn’t want to kill Felicity (obvi) and it’s murder music time. Green Arrow goes on the offensive, knocks a few dudes out, steals a machine gun, and clears the whole damn room before telling a confused and petrified Felicity-X “It’s the strong’s duty to protect the weak” and sending her on her way with a gun. 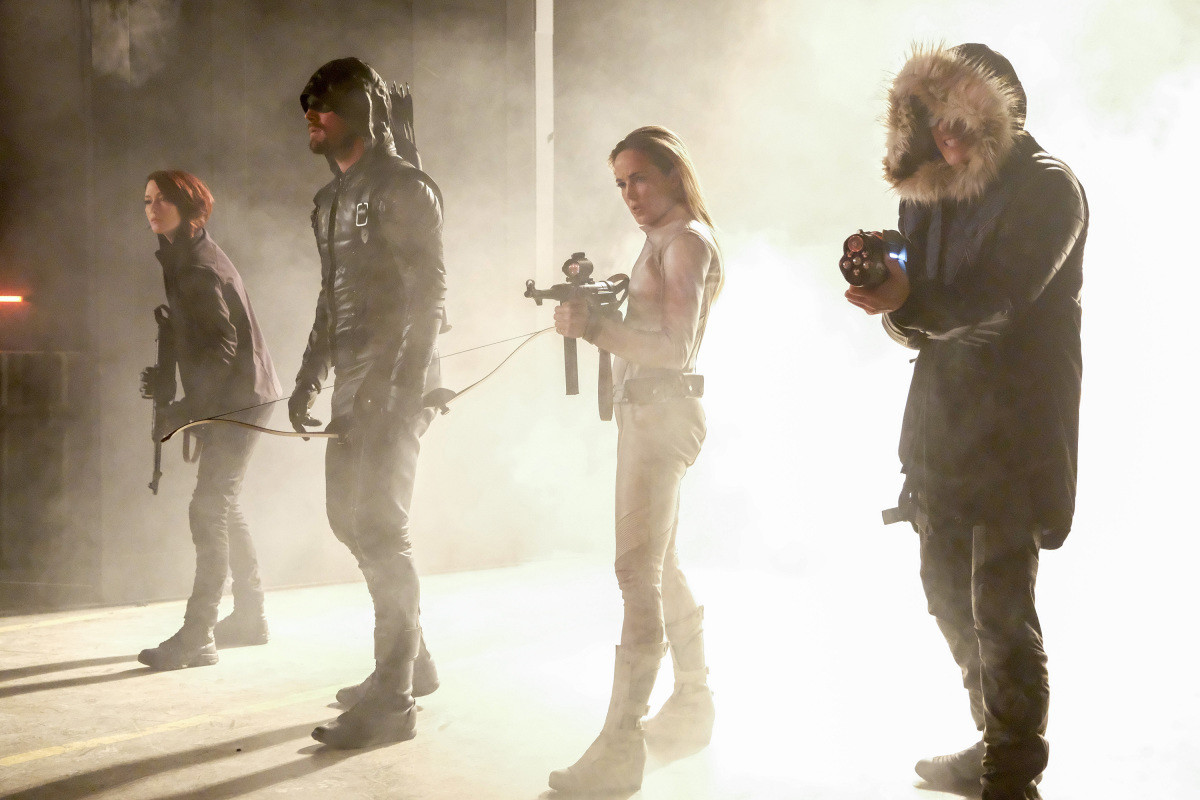 The Flash zips in ready to do battle, and is like, “Well damn, son. Delivered 42 fades in like 2 mins?! Coulda left one for the kid.” Then the whole team enters and makes a break for the breach room. They all woulda safely made it back to Earth too if Stein wasn’t trying to be a hero. As the team fights off the hordes of Nazis that just keep coming, he makes a break for the power level and catches a slug in the back for his efforts. Jax is distraught but under hella fire so he can’t go save him. It winds up being ol Grey himself who forces his old body to conjure up the strength to make it to the level. This guy army crawls across the floor, takes another bullet to the body, and opens the breach, saving the team as death looms overhead.

Oh and while all this was going on, the ride or die bae Tag Team Champs hold down their superhero boos. They send a distress signal out to the remaining Legends of Tomorrow, shut down the power at the Lab, knock out a few Nazi guards, and take their guns. They sneak around in the Time Vault and the vents until they are captured, but boyyy do they put in work until the heroes return.

In our final hour of crisis, the Superfriends get back to Earth-1 S.T.A.R. Labs and gang up on Metallo as Atom saves Kara from being cut open. They put the hurt on Dark Arrow and Kara-X until Reverse Flash plucks them out of harm’s way. The heroes hit the Waverider to save Grey who is only alive because Jax fused with him while he lay on the floor dying in Nazi World. Jax separates from Grey to set up the medical treatment, but Caitlin knows dead on arrival when she sees it.

After the very dramatic scenes of Jax and Stein debating the reversal of their powers, and talk of them being father and son figures to each other, the answer is made clear once Stein lays it out to Jax. They have to drink the blue power-canceling potion or both die. This scene was some real ass heartfelt shit and all of the Legends and fellow heroes felt it. Jax uses this lull in Nazi v. Hero action to tell Stein’s wife and daughter that he loved them. Dark Arrow soon sends a truce offer to the Superfriends that is vehemently turned down and the climax pops off something severe! 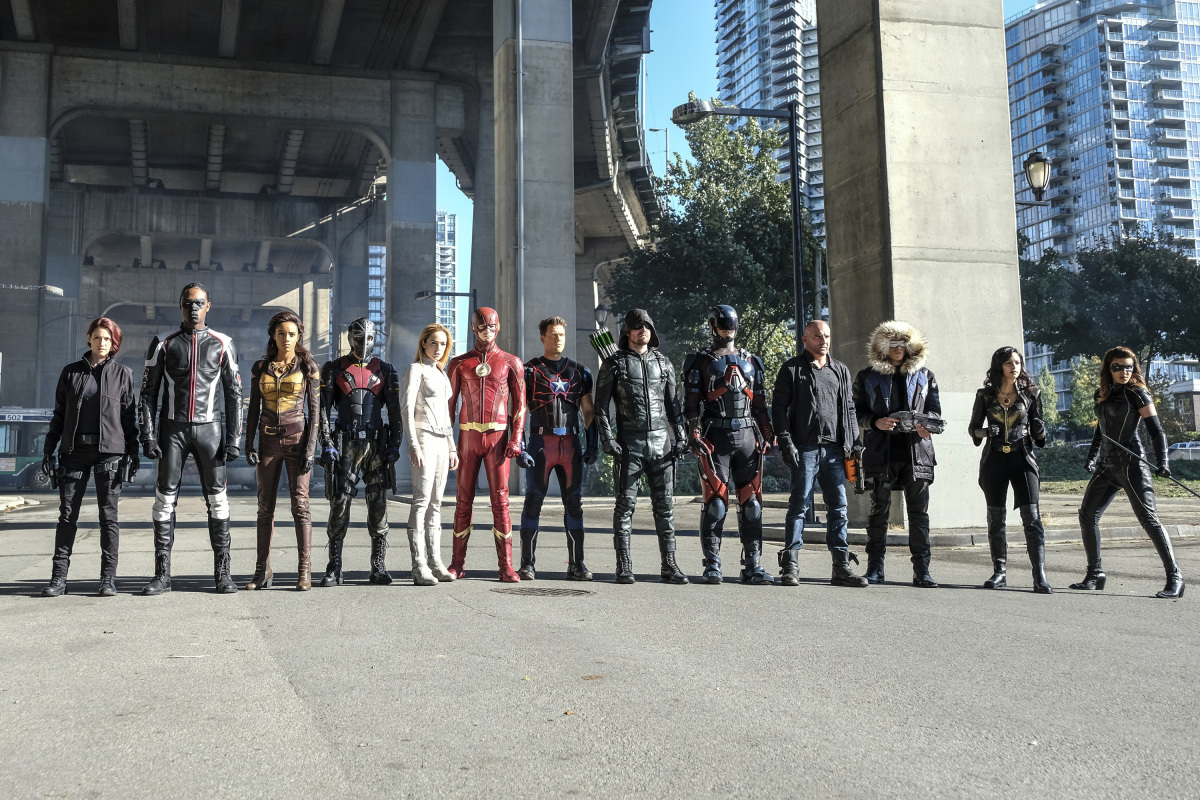 Not gonna lie, seeing that entire team of 13 heroes roll up like the Powers Rangers meets TMNT meets Defenders was lit as all hell. Then Supergirl and The Ray come flying out like death-dealing protectors from above and Killer Frost comes gliding out with the classic Iceman bridge platform! My hype levels was over 9000 fam!!

This scene was done so proper, I was sitting in my seat thinking, THIS DIRECTING MUFUCKA NEEDS TO DO ALL THE CW BIG BATTLE SCENES! Every hero got their own solo shot of glory. Everyone’s powers were on vibrant display. The heroes worked well off of one another, just like it should happen on these team-up crossovers. The Flash and Reverse Flash did attosecond battle in between the rest of their comrades. Scenes like this make me miss the first couple seasons of The Flash. Everyone else is literally standing still as they duke it out all over the terrain. They move to the streets and we see some next level CGI uppercuts and suplexes off of cabs. Killer Frost glides the femme fatales up to the Nazi Waverider to take out their shield. Vixen and Black Canary flex on unsuspecting guards. It was all so glorious!

Supergirl calls out Kara-X and they have some dope mid-air fighting scenes until the Nazi-loving Girl of Steel goes supernova. Supergirl takes her up, up, and away as she explodes in glorious fashion, then falls to Earth, only to be caught by Steel or the “Man of Steel” as he likes to call himself. Oliver does what he do and remains a cold hearted savage, delivering the arrow to the chest of Dark Arrow. Flash can’t kill Reverse Flash cuz he’s above that kinda shit and let’s him off.

Alex and Sarah say their goodbyes. Heatwave makes an inappropriate joke. The Superfriends all bounce to their own timelines, Earths, and lives. All except Felicity and Oliver. Why you ask? Because Barry and Iris need a best man and Maid of Honor of course! Flash speeds over to Star City, snags the ordained Dig and brings him back to C-City. Dig yaks..cuz of course he does and it’s casual spontaneous wedding in the park! Why you ask? Because Felicity finally tells Oliver she’ll marry him and they all are pronounced husband and wife. It was cute. The WestAllen and Ollicity shippers went wild.