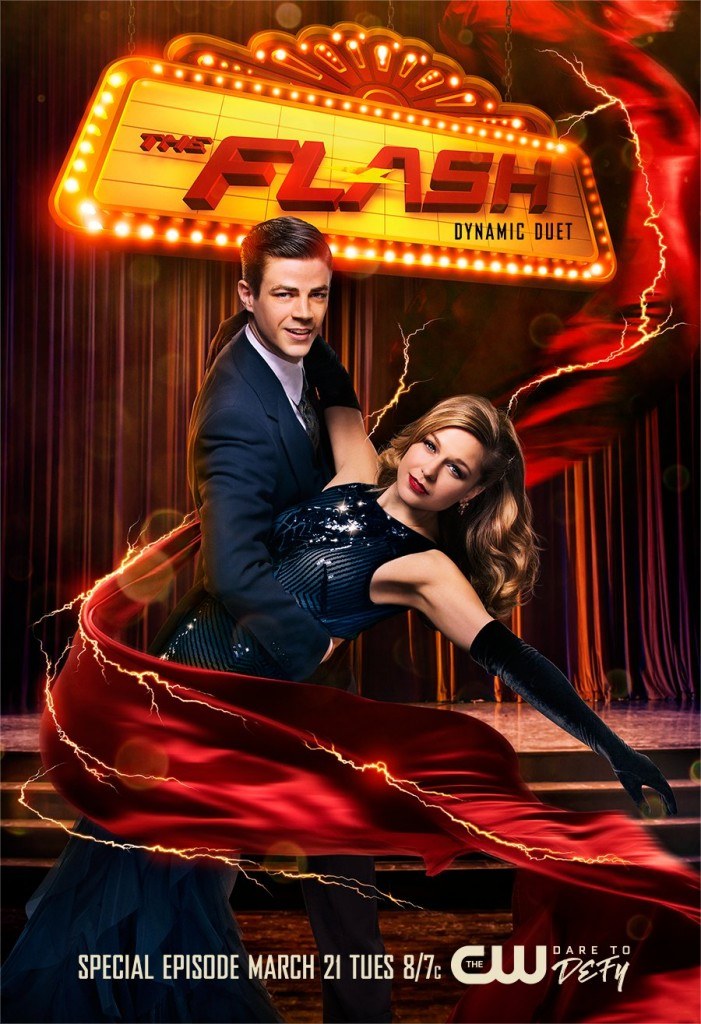 Alright ladies and gents, you know what it is. This week we get a break from the Savitar Savagery and WestAllen novella madness. Drum roll PU-lease as the long awaited musical episode finally blesses the Flash fandom with the vocals they been waiting on. This one starts off with Barry mopin’ around vein a dam Debby downer. Luckily we don’t have to deal with that emo noise, cuz HR calls the team down to the lab where a breach is bustin’ open.

S.T.A.R. Labs: Out comes Mon-El and Martian Manhunter carrying a passed out Supergirl. Some escaped alien put her under a spell and knocked her out cold. We find out this dude is Music Meister and he on some bold shit cuz he got the audacity to pull up in the S.T.A.R. Labs hood like he own the joint! Turns out he owned the joint, the Speed Lab, and every piece of equipment in the spot because Music Meister put the beast mode BEATS on Flash and Kid Flash. Wally took a LeBron shoulder in the paint and looked like he was gonna soil his breeches. Double M choke slams Flash and puts him in the same Musical trance as Supergirl. Barry is teleported to the night club, watching Kara hit the ill Audrey Hepburn high notes on stage.

AAAAAAAANNNNDDD you boys and girls better be ready for SuperGlee 2K17 cuz its comin straight for your head piece! Barry and Kara know they’re trapped inside some alternate reality, after both getting whammied like a bunch of suckers. Stuck in this world without their powers and alllllll they old friends pop up in their 1920s accents and swagger. Arrow’s Malcolm Merlin was there. Cisco was there. Winn up in this joint. Our villain with the trash Super Cuts look shows up and tells Barry and Kara that their very own minds and love of musicals created this world. The only way out is to follow the script, and follow the plot to the end of the musical.

Super Trash Cuts kicks off the singing with “Put A Little Love in Your Heart” The blocking is off the chain. The Annie broom tossin work is through the roof. The choreography is on point. Cisco with the home plate slide?! Winn on the piano keys?!

[quote_simple]Sidebar: I’m not gonna lie, I hated the idea of this episode, but I was fuckin wit it after a mere 15 mins.[/quote_simple]

Kara and Barry resume their storyline and encounter some mobsters who knock Barry out and take these two musical lovers hostage. They get tossed in some warehouse and Barry says fuck trying to escape and instead plays matchmaker with her and Mon-El. She then listens to his problems with Iris. It’s adorable, really.

Joe and Stein roll up as the mob boss leaders. They need Kara and Barry to find Millie aka Iris. They want to get back tot the singing in this ep ASAP so they quickly stumble upon Iris, but it doesn’t turn out how they expected. Iris has her tongue down Mon-El’s throat when they get caught. They declare their love for each other while grossing Kara and Barry the fuck out. Newsies Iris and Mon-El are convinced to tell their parents about their love, despite the rivalry between their families. Barry and Kara hope that this will be the plot movement they need to finish the story.

Harlem Renaissance Iris and Barry help her dads (Joe and Stein) understand that their daughter is in love and accept that. Kara helps Dust Bowl Mon-El’s dad accept that his son is grown and can make his own mature choice. Aaaaannnnndddd all dads walk away from their loving conversations callin’ up the homies cuz it’s time to set it off.

[quote_simple]Sidebar: FAM Barry’s face when Joe broke out into song!! He sat his skinny Twizzler ass down real quick!! He was squirming with joy and was out here grinnin, looking for wild audience approval and shit. Too funny.[/quote_simple]

In the real world, Winn helps Vibe, Kid Flash, and Martian Manhunter take down Music Meister, in a pretty dope little scene combining all of their powers. Iris and Mon-El lay off on the make out sessions and press our villain of the week to release their respective baes. He tells them that they have the power to hop into Barry and Kara’s musical world and pull them out. Of course he won’t give them the answers on how to do so.

Back in GleeLand, Winn is coaching Barry and Kara through new and exciting songs to perform. Everything is all happy go lucky normal harmonizing when Barry starts tap dancing y’all!!! Kara joins in, but she’s not as nasty as the homie. They dance and sing about being super friends and it’s fucking adorable as 6 week old puppies yo. These vanilla bean ass mufuckas can’t be out here flaunting this skim milk ass, Vermont ski trip ass, cotton candy during little league soft ass shit!

Out in dem streetz, all the dads pop off and a gun battle ensues. Barry takes a slug. Kara is hit with lead and both will die if they die in Super Musical World. Iris and Mon-El ask Cisco to send them into that world and somehow he figured out what he must do to send them there. Iris and Mon-El come rushing in to confess their deepest truths to each other before fading out. Iris kisses Barry and Mon-El kisses Kara and our heroes are transported back to OG Earth.

Out comes Music Meister clapping, praising the love they had for each other. He was teaching them a lesson this entire time. He wanted to mend each of their broken hearts. He drops a quick verse and moves on to the next person or squad who needs to be taught a lesson.

Caramel Love Nest: They did away with the shockers last week so you could brace yourselves for the level of cuteness that was gonna go down at the end of this episode. Barry doesn’t let the musical adventure he just went thru get forgotten. He says fuck all that sappy roses and candlelight fake proposal shit I was on before and busts out his rendition of “Runnin’ Home to You” right before proposing anew, and for all the right reasons this time. It was some truly beautiful and touching stuff. Berlanti and company did work this time around.

Fun crossover. Not too cheesy, not too crazy.

I kept it real and admitted I expected a landfill Musical episode, but it came through proper.

Coming down to the end of the season. Next week we got the rogue, Abra Kadabra ready to get bodied. Season 3 recaps locked and loaded in the chamber right here.