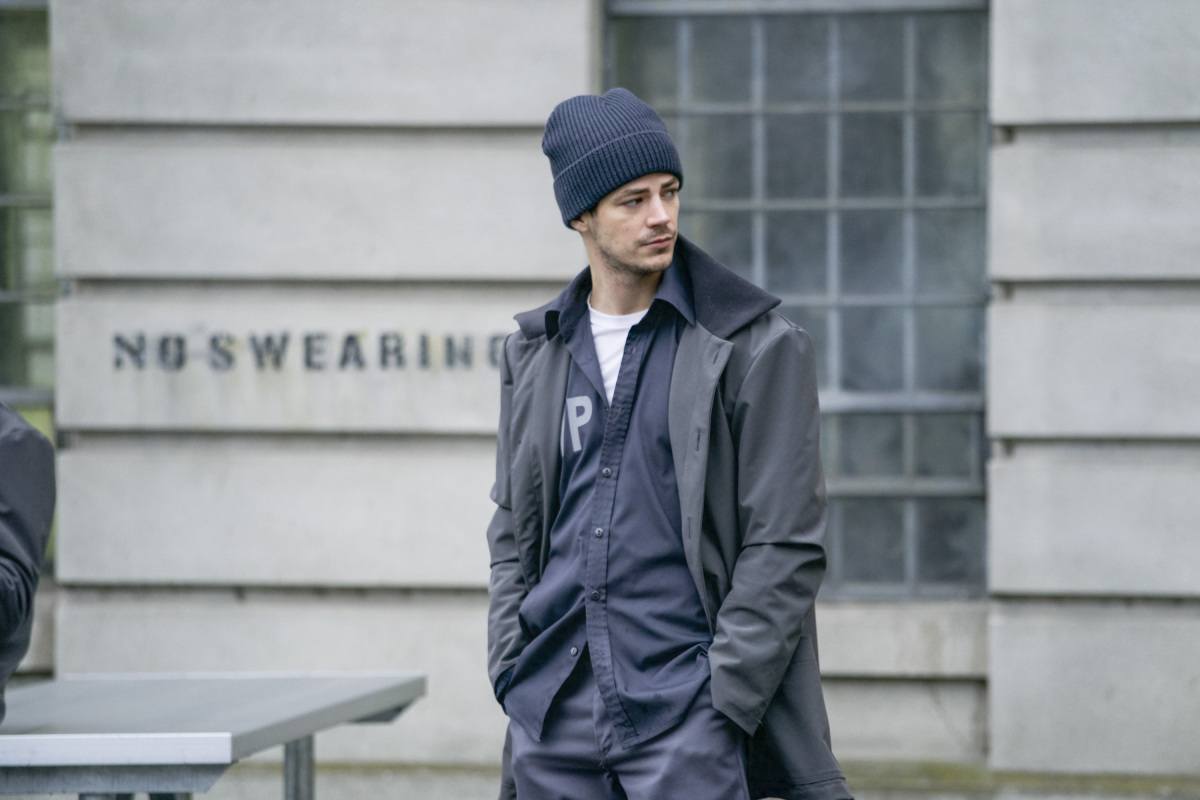 Ja-Quan and I gonna be tag-teaming the rest of this season, so I’m tagging in for this week’s episode about everyone’s favorite track star.

This week, we open with our poor, morally upstanding hero still in Iron Heights, sitting in his cell beside himself while a prison riot rages on just the other side of the bars. Guards are hemmed up, shit’s on fire…. It’s a bad scene, man. Eventually, Barry just can’t take it anymore and speeds through the prison, returning all the inmates to the cells.

In the meantime, Joe West is getting the dumbest list of demands ever from a hostage-taking bank robber who wants, among other things, an eco-friendly getaway car, like a Prius. Ralph, dressed in his linen gray pajamas super hero suit, uses his loooong arm of the law to rescue all the hostages before the robber, who’s got explosives strapped to his chest and is holding a detonator, even notices. After some clever banter, Ralph grabs the bomb and wraps himself around it while it explodes, which leaves a nasty burn mark on his suit and gives him heartburn.

As the criminal takes his perp walk with Joe, Ralph is feeling himself and happy to talk to the reporters on the scene. Unfortunately, since Cisco has yet to bestow upon him a proper hero name–being a little preoccupied with trying to get Barry out of the hoosegow–Ralph’s just gonna have to live with being called “The Stretchy Man” on the evening news.

Poor, sad Barry. He’s wandering around the yard looking like a lost puppy, staring at the clock, when Axel Walker–the Trickster–appears, offering him his extra pudding like it’s the first day of 3rd grade or some shit. It’s not like Barry’s forgotten that Axel and his pops kidnapped his dad Henry a while back, so he’s not too keen on being buds. And after a taste, the Trickster’s acting like that pudding might have salmonella in it anyway, so…no, but thanks anyway? As Barry is walking away from that dude, Big Black Prison Inmate #1 trips him up, spoiling for a fight. Luckily the warden just happens to pop up before anything pops off. He gives Barry the typical advice about staying out of trouble while he’s in there (which is supposed to be for the rest of his life, remember) and then tells him his 1:30 is waiting for him–Iris. 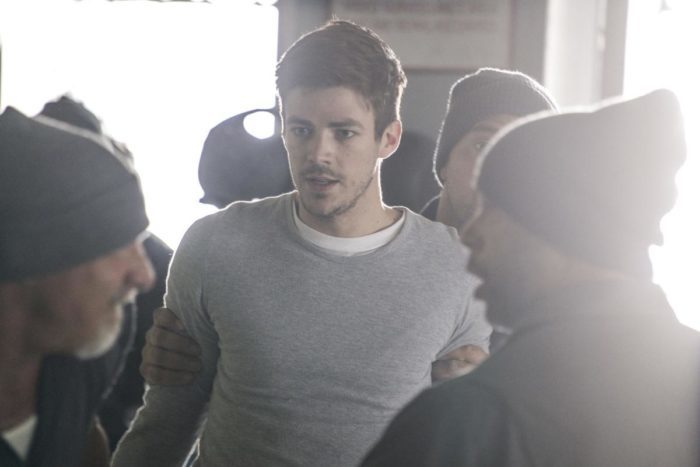 Ah, Iris. She’s got the biggest eyes in the whole wide world, and all she can see is her husband, stuck behind bulletproof glass. They chat about the work she and the team are doing to find proof he didn’t kill Devoe, but really, she’s heartbroken that they’re apart. When Barry puts his hand on the glass, I want him to phase through it SO BAD to touch her, but alas. Gotta say, though, Barry’s goofy-ass smile when he looks at her is so friggin’ sincere and infectious, it alone should win Grant Gustin an Emmy for Best Boo in a Comedy or Drama.

Turns out the pudding the Trickster was eating was tainted–on purpose. He gets taken to the infirmary doubled over in pain, and the nurse immediately diagnoses him–and stabs the guard with a syringe full of tranquilizers. The nurse is the Trickster’s mom, Prank, and she’s here to break her baby boy out of jail. 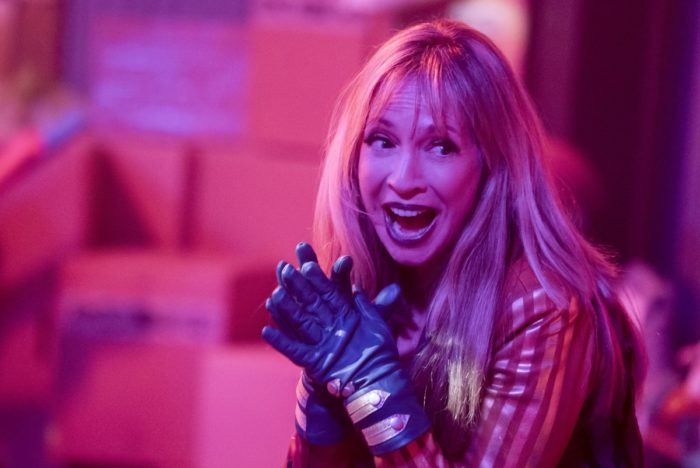 They escape, of course, brings Joe to Iron Heights to investigate. He sees Barry mopping a hallway–he’s on janitorial duty–and takes the opportunity to check in on him and see how’s he doing. Barry wants to help look for Prank and the Trickster, but Joe tells him he should stay put and watch his back.

Turns out Prank’s family owned a toy empire, and an abandoned toy factory is the perfect hideout for a looney-tunes mother and son. Axel’s certain that the reason his mom has busted him out is because his father wants to see him, but she breaks it to him that his dad doesn’t give a shit about them and is a dead-beat–even by cartoon-villain standards. Axel doesn’t take this very well and, after seeing The Stretchy Man on television, thinks he knows the best way to get his daddy’s attention.

Back in Iron Heights, Big Black Prison Inmate #1 and his crew make another run at Barry, this time in the workout room, accusing him of being a snitch since they saw him talking to the warden and then Joe earlier. Big Sir (Goldberg from WWE) intervenes and scares them all off.

The Trickster commandeers TVs all over Central City like the world’s worst Amber alert and threatens to bombard the town with exploding bouncy balls if The Stretchy Man doesn’t show up so that he can kill and prove to his daddy that he, too, is a violent psychopath worthy of love. The team pinpoints his location, and Ralph rolls out to meet him, feeling invincible as fuck. They banter for a while, Ralph uses his powers of elasticity to diminish all of Trickster’s weaponry–until Axel pulls out his “Hurty Squirty Gun” and shoots Ralph with some new-fangled acid. 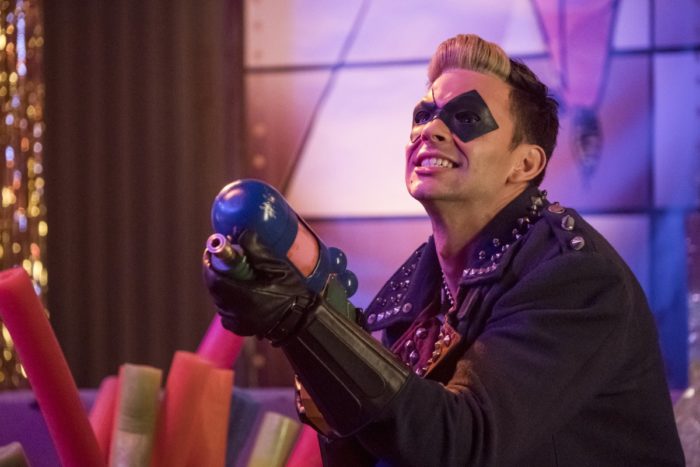 Turns out The Stretchy Man isn’t invincible after all–he can be hurt. “Now you know your kryptonite.” “What the hell is kryptonite?” Damn DC millennials.

Back up the river, Barry finds Big Sir and talks to him, asks why he protected him from BBPI #1. Turns out Henry Allen helped him when he was doing time. He’s paying back a debt.

While Trickster has made an impression on Ralph’s knee with his extra-special acid, he’s feeling bad about himself when he returns to the toy factory–since he didn’t manage to kill a hero, he’s afraid his dad will be disappointed in him. Luckily, Prank has decided to stop taking her meds and rejoin their life of crime. He’s excited that she’s down for the murder life again–she says it’s “like riding a tricycle. You never forget.” They tune everyone in to the Prank and Trickster Show again–this time they’ve got some game-show wheel nightmare setup with two hostages bound and gagged with a vat of that sketchy acid rigged to pour down on them. Double Dare this is not.

Team Flash is having a hell of a time locating the Oedipal duo–they’re not metas, after all, just two crazy fucking humans, so Cisco can’t vibe them–none of their equipment will give them a hint. This is going to require good, old fashioned detective work. Harry’s trying to find a way to neutralize the acid. In the meantime, Cisco gives Ralph a new suit–in a case the size of a business card–but now that he knows he’s not actually indestructible, he’s too scared to go save the Prank and Trickster’s hostages.

No, instead–he shows up at Iron Heights and tries to convince Barry to break out–phase out–and help stop them. Our hero, of course, isn’t down with that. He know the cameras will catch him missing, and he still feels like in prison is where he needs to be until his name is finally cleared.

Harry has found a solution to Trickster’s acid. Cisco figures out where they are but needs backup. This actually leads once again to taunting Caitlin until she turns into Killer Frost.

In the meantime, back in prison, Barry runs into Goldberg Big Sir and asks him why he helped him. Big Sir finally reveals that Barry’s daddy performed an emergency surgery on him when the prison doc wouldn’t and saved his life. And Barry reminds him of his dad. 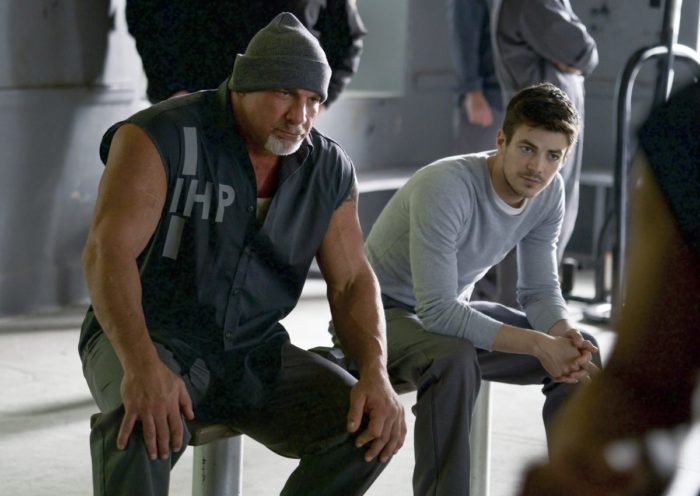 Of course, we can’t have this sweet and tender moment last. Once they part ways, and Big Sir heads around a corner, not knowing that BBPI #1 and the Get Fresh Crew are waiting for him in a desolate hallway and are READY TO RUMBLE! It’s a bunch of dudes versus one really big dude, so ordinarily you wouldn’t want to place any bets, especially in a city–and prison–full of people with extra-speshul powahs. But it ain’t looking good for Big Sir.

Killer Frost and Vibe find the Trickster and Prank’s lair and try to rescue the hostages. Turns out the hostages are…Prank and the Trickster, who put cuffs on our favorite second-stringers. Yep, as Admiral Akbar would say, it’s a trap. (RIP.)

Iris knows what’s going on and is just about to take her fine self out to rescue the second-stringers when Ralph shows up ready to rock–he got his groove back talking to Barry. Good on ya, Stretch. 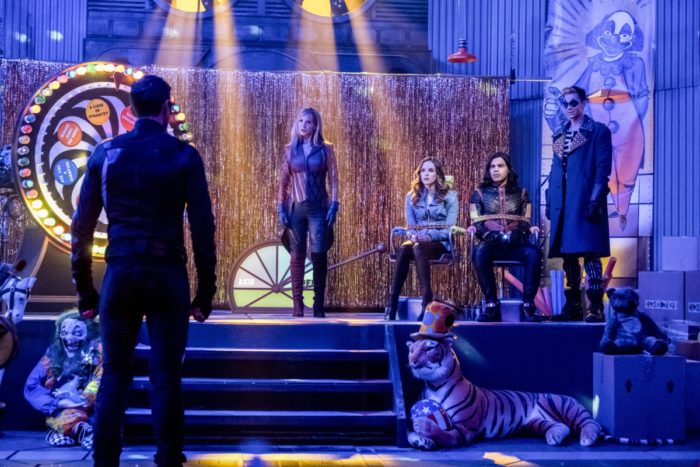 Ralph shows up at the toy factory in his brand new super suit, gives a lovely speech about realizing that he’s got powers but isn’t invincible, and gets even gets a standing O from his antagonists. But they’re not moved enough to get murder off their minds. Ralph turns himself into a human sling shot, bowling the Trickster over, and he and his mother release the acid all over Vibe and Frost. Ralph dives under the spout and makes a canopy out of himself over Vibe and Frost–and he’s not burning! Harry’s already neutralized the acid. Woot.

Because this episode is so thoroughly full of “witty” banter, we get to hear Prank say, “Family that slays together stays together” while she and the fruit of her loins are escorted away by the police. We know we’ll see more of them in the future. Ralph once again gets some shine from the local news, but still doesn’t have a good name. “The Elongated Man” will have to hope that shit doesn’t stick. (I’mma keep calling him Stretch in my head.) Regardless, he’s definitely coming into his own. 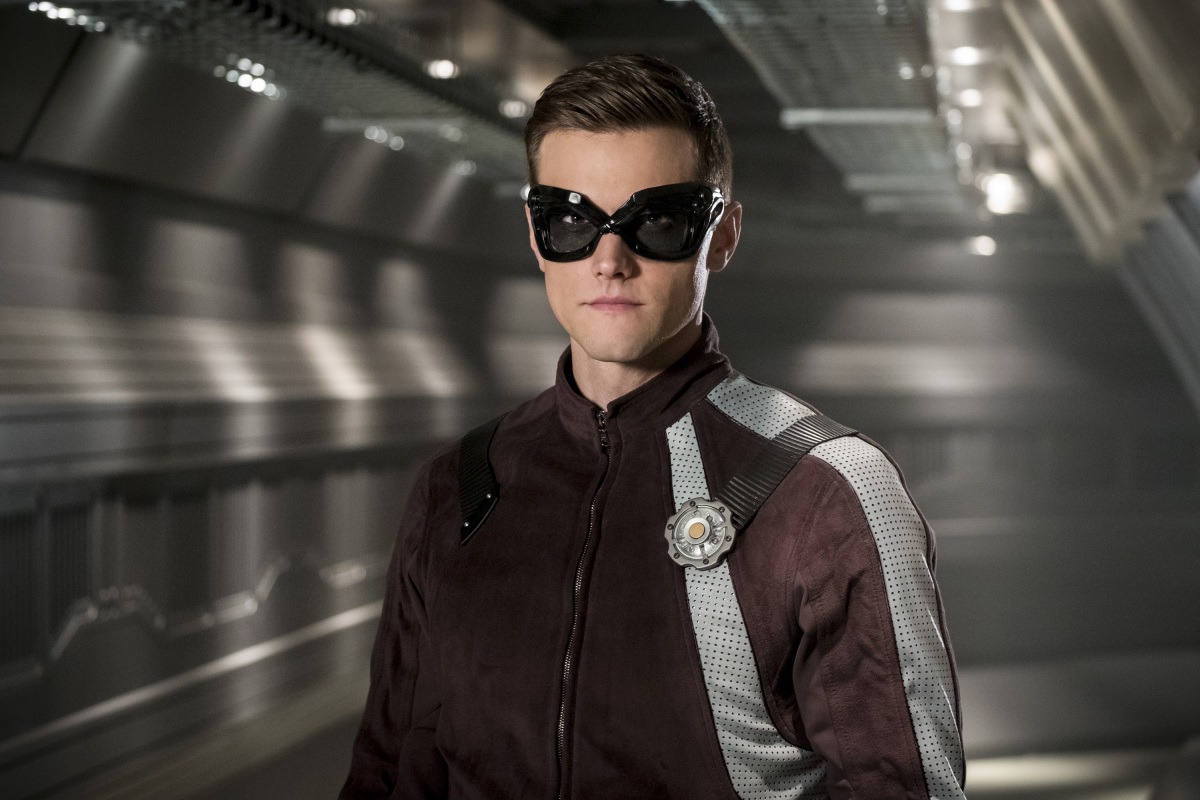 Big Sir and Barry talk again with thanks all around. Looks like our super reminds him of his father. And now he has a friend–a big, neckless, nothing-but-deltoids friend–on the inside.

Iris comes to visit, and once again Barry places his hand on the glass. Oh,please phase through the glass to touch her hand, please, please please…. YAY, HE DOES IT! Aww….

In this week’s coda, Vibe and Stretch go to CC Jitters and then both pull the “I forgot my wallet” shit. A cute nerdy girl in an Oregon Trail t-shirt pops up to buy coffee for Vibe and Stretch, rattling on about paying it forward and some other mystical shit she may have picked up while on a meditation retreat, but miraculously, Ralph doesn’t make a move. However, after he and Cisco leave the cafe, she see that the cute nerdy girl is writing in a notebook… some weird symbols. Clearly, we haven’t seen the last of her.

Hope she’s got a closet full of cool t-shirts.