Ayo, Benders, THIS IS NOT A DRILL, we got a for real episode of Korra again which means I will not be bringing you the clips show version of a recap. We start in Republic “No Church in the Spirit Vine” City where Ryu, RYU of all benders is, the guide for the tourist. Four years ago, this dude was living in his mother’s basement, rockin jeans with holes in them on purpose, wearing brand name skull caps and rejecting the notion of wearing jewelry, but thinking about getting tattoos of jewelry. Now, he got that hawk bending, a snug in the crotch wingsuit, a job and some platinum tips. I’m just impressed he ain’t out here taking tourists to the arts district of Republic City and telling them what coffee shops he fucks with. Then, shit gets real Super 8 when the dude with the camera wanna start poking aggressive spirit vines with a stick. This went from “Ryu’s Sights in the City” to “Tremors 17” real quick.

Back on Air Temple Island, Korra is playing Bender Fetch with Naga, while Opal is clearly fed up. When Korra asks her why she’s upset, Opal says because the police in Zaofu are oppressing the citizens after the capture of her family and many of her white friends on Facebook aren’t saying anything about it except that they don’t understand why the citizens of the Metal City would destroy their own property in protest. Korra says those people probably care, but couldn’t update their status because the wifi in their local Starbucks was probably pretty shaky. Or, something close to that. Jinora derails the conversation like some #AllBendersMatter muthafucka and tells them that she got a weird surge of spiritual energy coming from the Spirit Wilds. Once they get to the sight where everyone got snatched up, Opal turns to Jinora and says, “you sure it was a ‘disturbance?’ You know Jinora, when Korra and I were about your age, our bodies started to, you know…change, and it’s possible that you might start to feel some things change…”

Of course Jinora cuts her off because this shit ain’t puberty, these vines really out here wilin’ out. Korra put’s that Billie Jean on the spirit vine and gets some answers.

Korra catches a ride on that Vine-Runner internet connection and sees that Kuvira going is in the swamp dismantling that shit like the Supreme Court did the Voting Rights Act. Looks like Toph gonna have to show up with two forms of ID on voting day, even if she lived in that swamp for 30 plus years. Jinora continues to look for Ryu and the tourists, while Korra and Opal go to tell Raiko about Kuvira.

And welcome to the council that seems about as functional as our own United Nations. Raiko, who might be the worst president since Jaime Fox in White House Down, actually wants to go to war with Kuvira (something tells me he needs more people). Of course nobody is sure how to do that, so Prince Wu starts suggesting everything from his fan fiction notebook that he can’t get anybody else to read in normal circumstances. And yo, the fuck is Wu even doing here? I thought he was supposed to be on the lamb in Casa de Asami so he wouldn’t come down with a sudden case of kidnapping. Tenzin, who is playing the role of France, ain’t trying to be the aggressor in a gotdamn thing. He’s like, hey, she hasn’t attacked anybody outside of the Earth Nation, which I guarantee has been said by many a well respected leader before said person, did indeed attack the rest of the world in real life. Lin had to put her tea down on that shit. Korra and Opal come up in the spot to tell the council what they found out, but Korra realizes real quick that they playin her like Fredo Corleone. 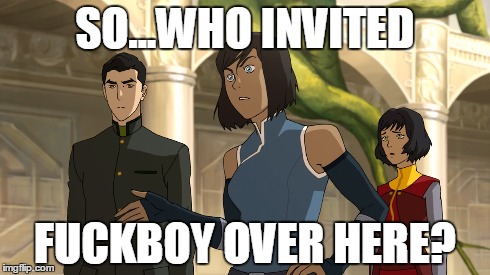 Everybody treating Korra with kid gloves since Kuvira hit her with multiple Shoryukens from their last fight. Ain’t nobody trying to give Korra that continue, fam. You know how it is when one of your boys beats the other one in Street Fighter IV so bad, you gotta stand in front of the TV until they come up off them sticks and walk that shit off? Well, everybody unplugging the God’s controller right now. Shit is rough.

Bolin and Varrick come running up in the spot cuz there is zero security or protocols when the world leaders meet in the gotdamn capital apparently. Reiko wants to make them political prisoners until they finally yell that got some information on Kuvira building a super weapon from the Spirit vines. Reiko thinks this proves they should attack, Monsieur Tenzin still says no and then, Fire Lord Izumi, daughter of Zuko, first of her name, finally speaks in regards to if the Fire Nation will take the war to Kuvira…

See, in this UN, The Fire Nation is probably Germany post World War II. Izumi is like, yo, we out here trying repair the buildings after Snoop left. We can’t be getting dragged into this shit, b. I’m level headed, who the fuck you think I am, my aunt Azula?

So, no official attack on Kuvira, but everyone is gonna sit back and try to defend themselves when Kuvira come through with the Nukes.

Outside, Bolin catches up to Opal and apologizes for putting her whole family on the Summer Jam Screen. Opal was probably bout to give Bolin a strong 16 bars on why she gives 2 fucks about his apology, but mercifully, Lin comes out to talk to her in private. Since the other leaders ain’t about this life, Beifongs gonna have to work it out on their own.

Korra and Mako come outside to meet with Bolin and this shit is the most emo, depressing, pit of despair I’ve ever seen.

While Korra, Bolin and Mako are on like their 17th hug, Jinora out here fuckin with the Vines of the Southern Wild. Apparently even the blue arrows can’t keep you from them bastards and she gets snatched up. She gets a message out to Korra before the vines put her under.

Can we talk about Jinora’s ability for a second? There was this dude name Tyrell in my neighborhood. Dude was the first one in the hood with a Raiders Starter Jacket. He used to rock that joint, every fucking place. It’s 12 degrees outside and this bastard got 8 layers on underneath so he could rock that jacket. Summer time, we sweating down to the the ankles under a 90 degree sun, and this muthafucka shirtless and rockin that jacket. 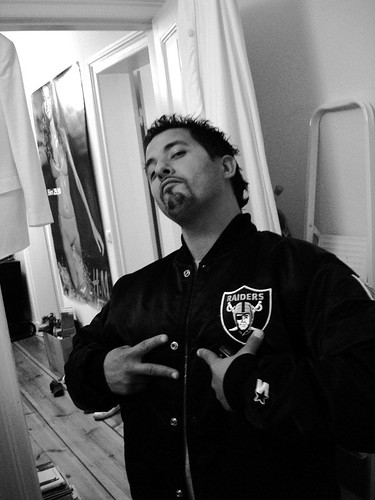 We fucking hated Tyrell. My point is, I don’t know how long it would take before cats got real tired of Jinora just poppin in on a bender whenever the fuck she wants. She’s the cat in your circle that got texting before everyone else and you feelin inadequate like the people that show up at Verizon talkin about, I can get texts, I just can’t send them. Jinora is the Real MVP and all that, all I’m sayin is, I would like to be able to entertain my loved one or jump in the shower without the possibility of Jinora just appearing like Candyman or some shit.

Korra and Mako show up to try and find Jinora and they do along with the rest of the others up in the Matrix pods.

Korra tries the Unalaq spirit spiral technique, but again that shit fails. What is Korra, like 0 for 4 on that shit now? Then Korra decides that going to the spirit world and freeing them from there will work. But Korra ain’t been back to spirit world like cats that got that first check out of college ain’t been back to the hood. It ain’t how you remembered it, bruh. She actually ain’t in the spirit world, but some weird purgatory where Zaheer still trying to give her that asthma. That’s when she decides it’s time to pay Zaheer a visit. Lawd.

Yo, let me cover this shit right quick so that we can get back into this gangsta shit…Bolin gotta pump the brakes yo. Your boy is super Robin Thicke right now. He bout to star in another mover called “Opal” and make that shit all about winning her back. Still, I love how Opal is done with AYEBODY’S shit this season. She slowly trying to reach Asami Da Fictional Bae status.

Raiko knows that Kuvira is a real threat with this possible weapon, so he needs some Avengers on it: Natasha Ramanoff and Tony Stark. Prez gotta swallow his pride and work with Varrick again, but Asami lets him know what the fuck AIN’T happening, this time around.

So, here’s what things look like when you are on your way to meet with a GAWD. First off, this prison look like SOHO carved into a mountainside where the doors are as tall as the building. Second, they got your boy locked up down in the Earth’s core and shit. That elevator must be the equivalent of driving through Pennsylvania. Korra uses all that time to tell herself that she ain’t afraid of Zaheer anymore. They raise that last door and here is Zaheer DA GAWD, levitating in his chains and rocking the no shave November. Korra tells him she’s moved on, she’s got some gospel in her life and that Zaheer no longer scares her…

…can’t blame a girl for trying.

Zaheer calls her out, talkin about “The Hood been talkin, Korra. Says you don’t come around no more.” Korra is doubting herself again and thinks that she will never be the same. Then Zaheer gives her that straight up Untethered.

In a related story, this is now the alarm clock on my phone. I need to wake up every morning hearing this shit. Zaheer the Best to ever do it yo. Seriously. He got nothing personal against Korra. She was just a job, b. So knowing that what’s best for the world now is for Korra to be at her best, he helps her do it. He tells Korra she needs to become untethered, remove all earthly possessions. So all she has to do now is kill Asami. What, huh, nevermind. Zaheer be going too far sometimes.

Zaheer takes Korra through that Fight Club “go to your cave” type therapy where she has to accept that Zaheer almost cut her power, kept her deposit and rented the building to someone else. Finally, Korra finds her way to the spirit world again and guess who’s bizack…

Welcome back Raava (I believe I had that one)! She guides Korra to her captured friends and frees them.

We exit on Bolin finally putting down this #NotAllLavaBenders shit and telling Opal how much he loves her. Well you know what love gets you? Dragged along to the Earth Empire on a suicide/rescue mission with the love of your life. This is like when Brad Pitt left Aniston and hooked up with Jolie, thinking it would be wild and sexy and crazy, but then she dragged his ass all over the globe doing humanitarian missions and adopting African kids.

Good luck with that Bolin.