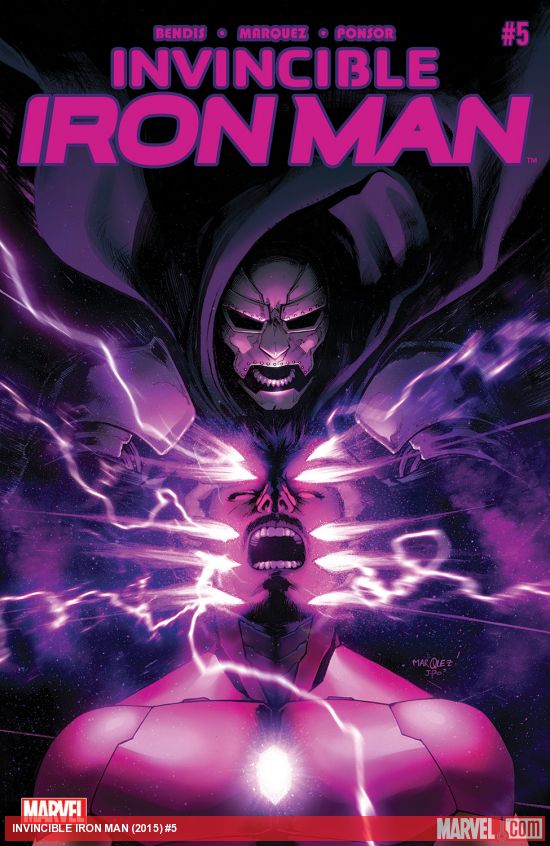 So far, Brian Michael Bendis’ Invincible Iron Man series has been a pretty serviceable flagship book for the All New, All Different Marvel line of books. Though it didn’t come across right away in the story-line, the book takes a new tact with some old characters as well as some old problems in Tony Stark’s life. In fact, the story has been such a lighthearted approach (in comparison to a lot of the previous major story arcs), it almost comes across as a superhero dramedy about a man-child billionaire getting his shit together while making the world a better place.

Okay, so Issue #5 is one of those Bendis comics where the effectiveness depends largely upon how you feel about Brian Bendis’ style of writing. One on hand, the end of resolution of one of the first major conflicts ended on a highly positive. I mean, come on….a Marvel team-up between Iron Man and Doctor Doom against Tony’s demented criminal ex-girlfriend? There is basically no version of reality where that’s not an awesome scenario. None. The relationship Bendis is establishing between Shellhead and Doctor Strange? That is good, old fashioned Larry the Cable Guy, “I don’t care who you are” hilarious. Also, adding David Marquez’s ridiculously good looking pencils and Justin Ponsor’s cleanly rendered inks makes the whole affair that much more entertaining. Easily, this is one of the top three best looking books Marvel has to start the year off right. 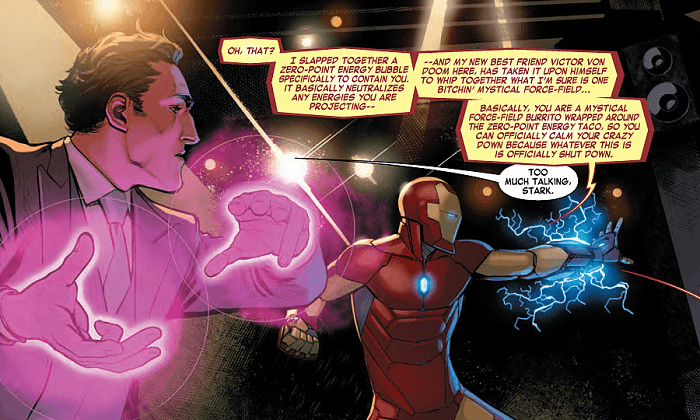 On the other hand, the resolutions to the conflicts don’t seem to reveal much about where this book is going as a whole. It’s hard to tell if Madame Masque is just a drop in the bucket of related problems revealing themselves in the Marvel universe or just an isolated incident. Or…it could very well be that Bendis is trying to blur that line, but the murkiness is more perplexing than intriguing. Also, the addition of Mary Jane Watson to the Armored Avenger’s status quo is a double edged sword. Mary Jane Watson is an awesome character and any opportunity for her to do her thing is commonly a godsend. At the same time, it’s a little problematic that, for all her potential as a solo character, she seems to be a replacement for Pepper Potts as the Obligatory Female Hostage To Tony Stark Getting His Shit Together. Will she prove to be more? Time will tell, but so far, it could go either way.

Bottom Line: Despite being an entertaining one, the resolution to the immediate threat wasn’t as effective to the larger narrative as it could have been. Still, it’s a gorgeous book worth reading so there’s that.