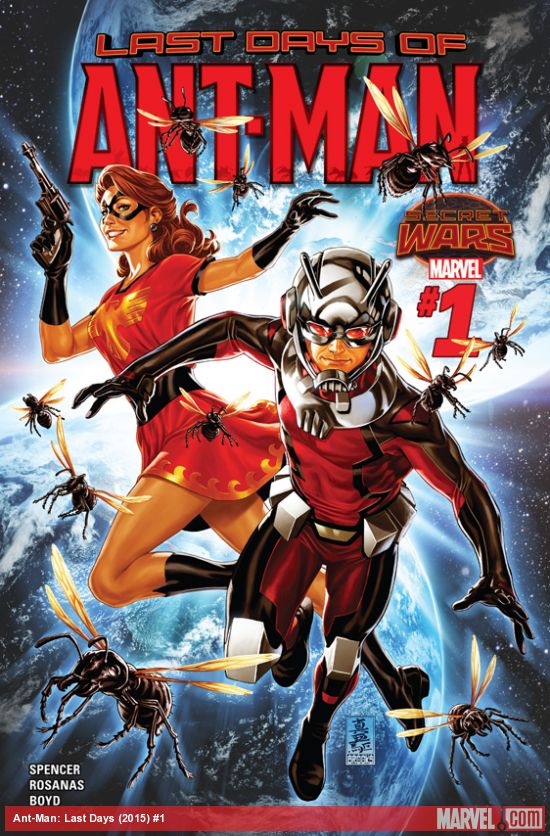 Ant-Man is the most underrated series at Marvel — nay, fuck that — in the comic book game today. There, I said it. *covers ears* La-la-la-la-la-la-la I don’t care, I don’t care, I DON’T FUCKING CARE! Nick Spencer and Ramon Rosanas took Scott Lang and turned him into the most chill B-list hero in the game. This team together has done what Matt Fraction and David Aja did with Hawkeye (turning both Clint and Kate into animals through character development and that back-to-back on the cover of Lethal Weapon-level action).

As Secret Wars takes place we’ve seen how many heroes spent their last days. Spencer has truly crafted a masterpiece here with Scott taking a job from his (only) investor Morgan Morganstern that requires his mad cat-burglar skills.

It’s interesting how Spencer has Morganstern flip between being bluntly cold as well as somehow expressing her faith in Scott. We’ve been wondering what her deal was since Scott saved her bank from the Nazi Robot that turned things to gold (that was inadvertently his own fault for unknowingly providing a way for it to break free from where it was being stored in the bank). It was a reveal that I would never have seen coming. We finally get her backstory and her grand scheme for things. It’s truly… touching. I don’t know what else to say. I was truly shocked by this, and when Scott recognizes what’s going on it’s a huge sign of him being someone who appreciates history and those that contributed to it.

As if there was even a doubt, Rosanas does the damn thing on art yet again. He is able to capture so many great moments with Scott, from his actions to his self depreciation, failures, victories and of course when he hits his stride with snark.

The end of the world comes back to the reader as much of an after-thought and we get a very good approach to how Scott handles it. The ending tho?! THE ENDING THO?!?! BREH! All I’ma tell you is we discover the one rule to being an Avenger straight from Steve Rogers’ mouth. Spencer and Rosanas leave us with a great bridge for Ant-Man’s return in October with his crew fleshed out with (former) villains.

In five issues they’ve given Scott Lang a shortcut level-up in character development. Lang’s personality and humor are the biggest draw of this book, and the unique part is how he uses his powers predominately for stealing and usually as a last resort when violence is necessary. This is a character everyone already hates on and doesn’t expect much of, whether it’s because he’s no Hank Pym or considering him not good enough for the big leagues. Spencer and Rosanas shut that shit down in only five issues. Lang is his own dude and an ex-con father, trying to get his startup off the ground and giving ex-cons a chance by working with him to do good? Ummm I don’t see any of your favorite heroes out here giving folk a second chance like that.

This is not a series that should be slept on. I can’t stress that enough. Especially after the success of the movie, this series keeps the momentum going incredibly well. This book is truly a treasure and turns a Scott Lang — who you may consider a 2nd-3rd tier character — into one of your Top 5 Dead or Alive favorite heroes.