MECCAcon is space that provides an atmosphere for nerds of color to interact with and support creators of color, check out new diverse titles, and free reign for cosplay. You can also meet up with other nerds of color that share the same interest across the genre of pop culture. Black Nerd Problems talked with Maia “Crown” Williams, the founder and organizer of MECCAcon, to learn more about the importance of the gap MECCAcon fills.

Black Nerd Problems: For years you have nurtured MECCAcon/BSAM into a much-needed haven for incredible African diasporic comics, film, and art from some of the most slept-on Black and brown indie artists in the game. That seems to be the ultimate labor of love. What work or moment sparked that passion for you and what makes you so ride-or-die for this particular universe?

Maia “Crown” Williams: The biggest moment was looking thru my son’s comics collection, and noticing the severe lack of self in books my son was reading. Other than Black Panther, which he had many of, there were barely any others. Also, not one was an indie series of any kind. I began researching and discovered another person in Detroit, Andre Batts, who organized a local convention here in Detroit. I met him at the African World Festival and began working with him immediately. I also began googling indie Black comics and met quite a few online via Facebook. Us indies are everywhere on social media, but we form like Voltron via Mark Zuckerberg.

I was so amazed how many Black comic series existed, how many creators were Black that I had never heard of, and I became obsessed with buying my son… everything, lol. His comic book selection is insane, he has titles famous, legendary creators even tell me they’re jealous of. He even has like 50 first edition prints of Milestone. How? One will never know the Jedi mind tricks my son beholds. I believe in working in the comic book industry cuz I believe the self-sustainability of my people. I can’t complain about lack of this, that, and the third if I’m not out here contributing to the growth and elevation of it all. I do my part, then I complain, lol.

BNP: Let’s say I’m a devoted blerd deep into this comic life, just learning there’re superheroes, villains, and entire universes that look like me. I’m excited but don’t know where to start? What works should I begin with?

Maia: Well, because I’m petty, of course I will start off with squad. I love universes, but I tend to love real-time settings as well.
133art by Jason Reeves and the rest of the team, Ajala: A Series of Adventures by N Steven Harris and Robert Garrett, and Is’Nana The Were Spider by Greg Anderson-Elysee, Malika by Roye Okupe, and many more would be a great starting point. I also love Malice in Ovenland by Micheline Hess, Saga by Brian K Vaughn and Fiona Staples, and of course Jim Crow Comics by Rahim Shabazz. Bounce by Chuck Collins is absolutely hilarious. Blue Hand Mojo by John Jennings is great, as well as other titles from Rosarium Publishing. I actually had original sketches from it via John who gave me quite a few pieces for a MECCAcon raffle 2 years back. 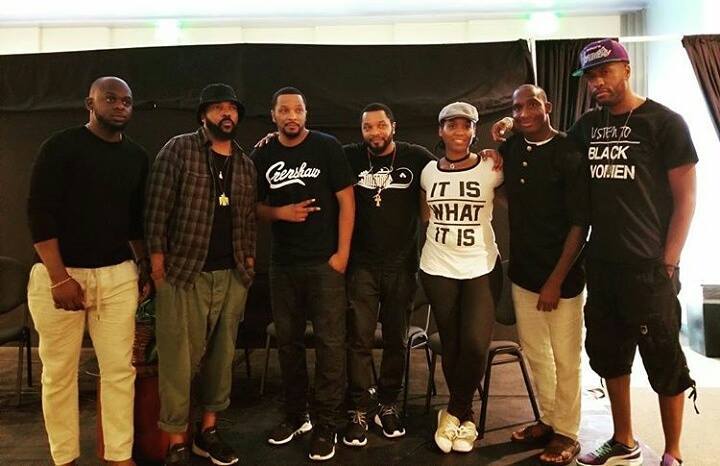 The biggest and most important book in mankind as far as this industry goes is Black Comix: African American Independent Comics, Art and Culture by John Jennings and Damian Duffy. That should be in every single household if you are a comic book fan of any kind. Volume Two is coming out very soon, so be on the lookout for that as well. I’m not in it, but…

BNP: You are constantly imagining ways to grow MECCAcon into a bigger and better entity. One of the cool things you’re introducing this year is a subscription box service. Can you talk a little bit about that and what we can expect to find inside?

Maia: #MECCAconSubBox is literally the first of its kind. A friend of mine came to me with the idea because she was crazy enough to think that I could pull this off, lol. It officially launched in full on October 1st, and I am very excited! You receive 3-4 printed comic books, downloads of international Black award-winning films, and maybe downloads or a physical gift of something else. We have many sci-fi, Afrofuturism, speculative fiction, and filmmakers participating, as well as Black-owned businesses, all from across the country and globally. It’s pretty exciting. 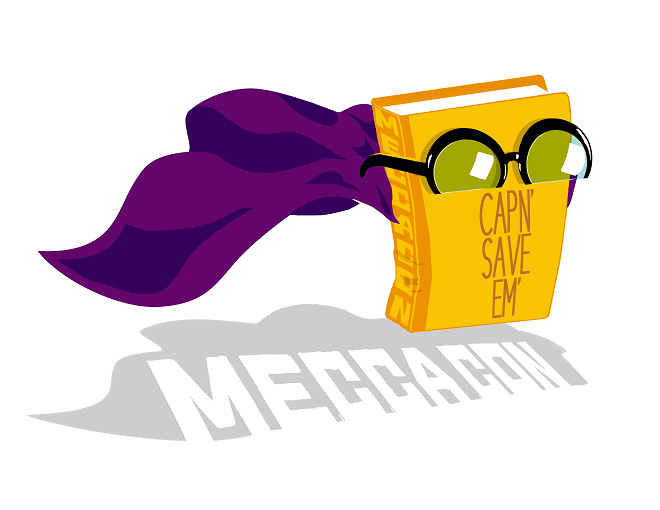 BNP: I know the variety and amount of subscription box options are growing by the day, but it seems you may be tapping into an entirely different wave. What makes the MECCAcon SubBox an essential monthly grab?

Maia: Well, first and foremost, this is the very first Black comic book subscription box ever. This is also the first indie comic book subscription box, period, or if one exists, I have yet to have seen it. Every month for only $25 (plus shipping), you get a full-blown MECCAcon and BSAM mailed right to your doorstep, in the form of a subscription service. It’s basically a convention in a box, or at least that’s what everyone is calling it. Plus, our mascot, done by Jason Reeves, is a book, named Capn’ Save Em, with a purple cape, wearing ALLEYandEYE frames, sooo… yeah. *drops mic*

BNP: And are there/will there be any customization options available if I ever want a very specific blerd flex some months?

Maia: I’m trying my best not to make that an option. Most subBoxes don’t do that, and with all the hard work it takes to make boxes a success, I honestly see why. I want this to be a surprise box. I don’t want people to know exactly what they are gonna get, I just want them to know the shit is gonna be dope. I also want people to know that they are supporting a sista in the community doing things not only to make a feasible living but even more so doing this to elevate the growth of her community. So basically, I want people to know they are supporting a Black-owned business and be proud to spend their money even off of that alone.

Sorry, I can tell I just went full Super Saiyan blackity black, it comes out sometimes, lol. In the future this might be an option, but it will be rare. If we do them in the future, it will be boxes like the comix box, or the B.O.B. box, or the film industry box, etc, and you can pick from those. I’m honestly just overly excited (but stressed) about this new launch, and I’m so honored by all the contributors. My list is amazing, and I pat my fro and grease my scalp in honor every day.

BNP: What words of advice do you have for Black indie comic artists trying to break through in a time both hungry for and heightening aggression towards the ways our narratives are challenging norms?

Maia: Let’s see… Well, for starters, don’t come out and say that your book where “never before has there been a Black comic that…” etc. Unless you know every single comic book out, chances are there are many books that treat our culture, our heritage, and our legacy with respect. I see many people say that, and it’s annoying. We been winnin’. It’s all up to you to do your research. I also just really want y’all to learn to put some clothes on the sistas. We can’t be out here fightin’ and progressin’ n jumpin, sliding, and flying in 90% of these outfits y’all got goin’ out here. Let’s kill some of that and remember that we are out here too fighting these streets. Let’s keep our breasts tied up a tad bit more, cover our love boxes, and draw us with a bit more love.

Learn to network. Get on group pages and learn to speak to people, share your work, and accept criticism. Lastly, don’t be so scared to vend at small comic cons, not just mine, but smaller comic cons in general. Know your audience, and build from there. If you have a book, you better not tell me you don’t have a website, a WordPress, or something. Build your brand.

BNP: We both rep Detroit through and through no question, and MECCAcon/BSAM’s roots firmly start in our city. But are there any other places someone could attend MECCAcon? Also, what are some of your upcoming events, when and where can we attend them, and where can we learn more?

Maia: N Steven the Harris (make sure you type it just like that, I wouldn’t have it any other way, lol) and Will Focus tease me relentlessly on how hard I ride for Detroit, especially because I’m really from Farmington Hills, lol. I love this city in full bloom. You can’t tell me shit bad about Detroit and expect me to converse with you maturely. I basically black out and go full Njia Kai / Olayami Dabls / Sabrina Nelson / Terry Blackhawk on you, ok? They are my Detroit politicians, lol. I started MECCAcon in Detroit, no money, no donations, no sponsorships, no grants, no Kresge under my name (even though we both know I deserve one, lol), no nothin’. I persisted each and every year and won. It is a struggle, but also very much a blessing.

Last year, myself and Dr. Reynaldo Anderson founded BSAM (Black Speculative Arts Movement). It is a traveling Afrofuturism, comic book, and film convention that tours nationally and globally 8-11 times a year on average. We are very booked for next year already, and still very much adding on. We just completed BSAM Montreal last month, and we have BSAM Toronto October 21st at the University of Toronto. This is our second year in Toronto. Our Canadian representative, Quentin VerCetty, is doing an amazing job with his team there, and we couldn’t be prouder of all of his accomplishments as well. MECCAcon International Film Festival also tours alongside BSAM, and is registered under Ava DuVernay’s ARRAY.

February will bring us St Louis and Atlanta, as well as our multiple rented theatres for #TCHALLAandCHILL, our screenings for the highly anticipated Black Panther movie. To say I’m planning my outfit is an understatement. March will have us in DC, April in NY, May in Oakland, June in L.A. again, and late summer we will be in Ghana for #ChaleWote! We also will be in Berlin next November, as well Greece this November. It’s a train that continuously moves. You can find all the info on our websites or via social media at @meccacon and @bsamconvention. I’m everywhere free with a login. I got in trouble on Plenty of Fish cuz I was selling tickets to #MECCAcon2017 on there and had flyers and stuff, as well as links and hashtags, lol. #DEONTEOSAYANDEshrug 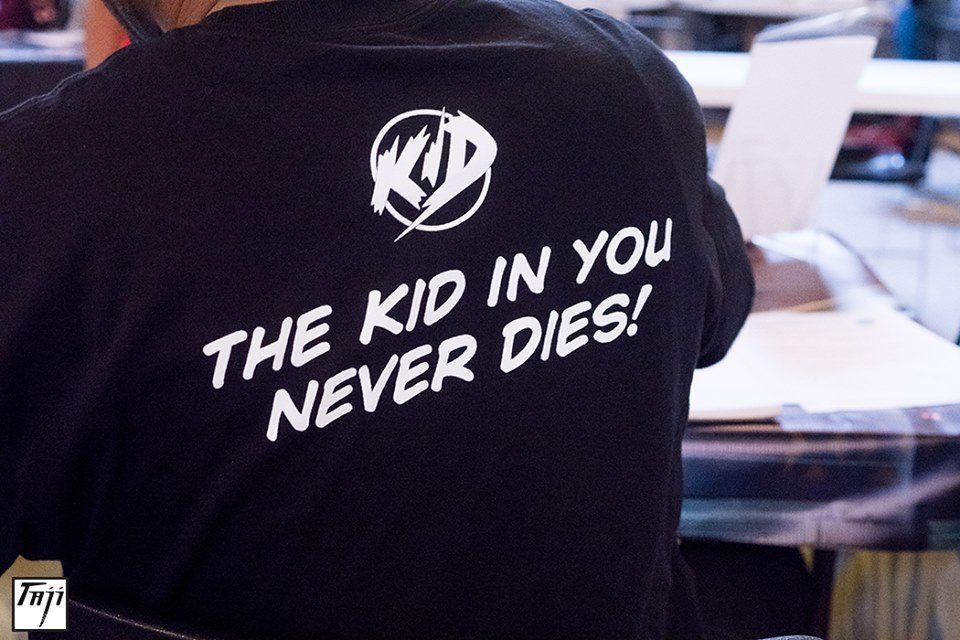