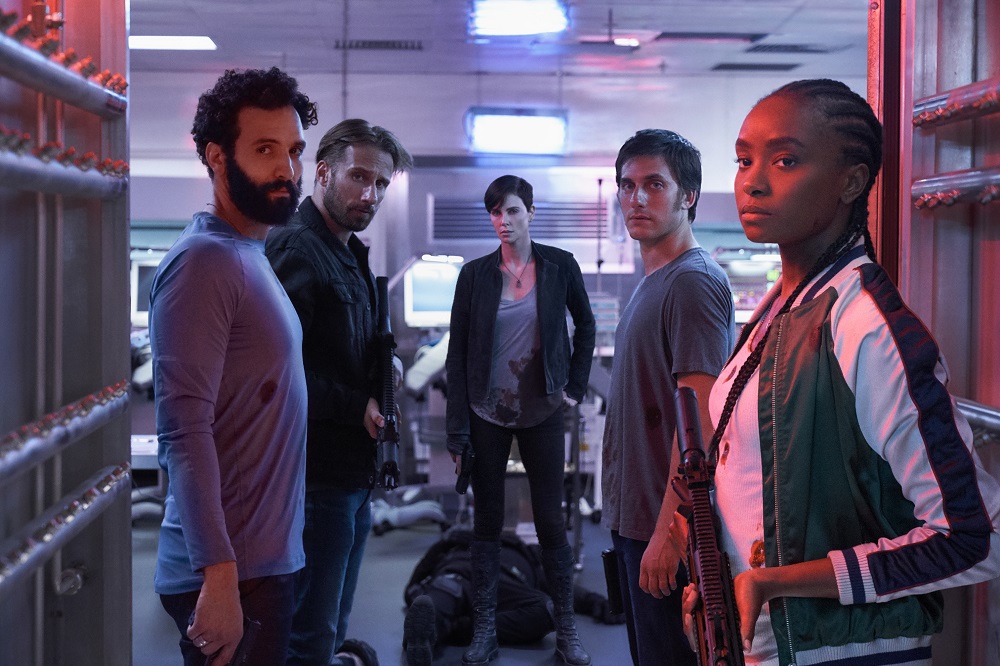 Back in 2017, not only comics, but specifically indie and creator owned comics were flourishing. While many big titles would enjoy long and enduring runs, its possible you missed a gem in the form of Image’s The Old Guard. Written by Greg Rucka (Wonder Woman, Lazarus) and drawn by Leandro Fernandez (Punisher, American Carnage), The Old Guard (volume 1) tells the story of a group of mercenaries that are set up with a fake kidnapping and then ambushed in an attempt to reveal their secret. Their secret being that they are immortal and have been doing the Lord’s (or, ya know, the other one’s) work for centuries. The story moves from them being caught in the act of not dying after being riddled with hundreds of bullets, to being hunted for their gifts.

The movie adaptation follows this main premise along with a number of other detailed plot points. All the characters from the comic are present with some given a little more to do, maybe because of the caliber of the actor (like Chiwetel Ejiofor as ex CIA operative, Copley). The acting is mostly good as it is hard to go wrong with performers like Ejiofor and THE Charlize Theron in the leading role of Andy. Or Andromache of Scythia if you nasty. Theron, who is one of the best action stars in the game now (full stop), anchors the cast with a steely and mostly wise gravity of someone that has lived for thousands of years and has become surgically good at everything she does: be that fighting or plotting strategy. Her team consists of three men from various times (though they are all at least hundreds of years old), while adding a fifth early on in Nile (played by Kiki Layne). Nile is a marine who suffers an otherwise fatal injury in the field and quickly feels the otracization from her fellow soldiers who watched her “die.”

Where the movie works is in the action mostly. This is an action film after all (and padded with action scenes that weren’t in the comic). There is a lot to like. The choreography is good and its very fun watching the immortals all fight together in unison. You get the sense that they have been fighting alongside each other for centuries as they always know where each member of the team is at in any given moment and trust each other in ways that indicate they don’t even need their sight to complete a mission. The climax gets…a little ridiculous, but we’re talking about an action film with rising stakes where immortal characters are involved. Ridiculous in the closing action sequences kind of seemed inevitable. What did fall a bit behind the curve was the look of the film, that plays it very straight up. That’s a little disappointing considering how stylish and opting for flair the art in the original The Old Guard comic is. There were no stylized choices and nothing veered from a very linear story.

The best moments of storytelling seem to happen in the flashbacks and some context and backstory for our immortals, mainly Andy. Andy is cold and pragmatic, often scoffing at other’s religious beliefs or notions of hope. She has lived for eons thinking that she would be making the world a better place. In the present tense, she sees the hellscape that is still our world and it has made her the height of cynicism. While most of the changes from the comic to the movie make sense as far as movie pacing, a glaring omission is some of Andy’s most fascinating backstory. In the movie she’s seen as loveless and a continual loner, but her characterization in the comic gives us stories that explain her disposition in original ways. This lack of depth makes her character much more one-note than it needs to be, which puts a lot of pressure on Nile to be her counterweight. Which makes Nile more one-note as well.

The Old Guard is a mostly conventional action film that adopts the premise of its source material but little of its style. Some decisions are made to give a more cinematic feel to the source, but much of that feels unnecessary considering how the cinematic nature of the comic itself. Like a lot of comic book adaptations, The Old Guard would probably be better served by a limited run series as opposed to a two hour film. The characters don’t fully have the time to be fleshed out and many characters are slotted snuggly into very conventional archetypes. With all that said, the action will keep you entertained and its cool, most of the time, to watch characters come back from Wolverine type injuries (even if the CG is a little lacking). Like the comic (but in a different way), there was space left for a sequel and I would welcome it, provided they experiment a bit and let the characters get their fill.