It’s time to pay tribute to one of the realest characters to ever grace our manga pages and television screens: Kenshin Himura from the manga series “Rurouni Kenshin.” Now before we go into why he’s the realest, you need to know what “The Realest” actually means. The word has a few meanings but I’ll narrow it down to honest, respected, raw, and not following what others are doing — not trying to be someone else, just doing you. He was known as Battōsai the Manslayer and one of the most bloodthirsty killing machines to ever walk the Earth because of his participation in the Bakumatsu war.


[divider type=”space_thin”]
After the war, Kenshin Himura is now a wandering swordsman with a scar on his cheek, easy going, cheerful, and an all around nice guy. He carries a reverse-blade sword, which is a sword, but reversed, and not made for killing since he did enough of that already. He wanders around helping people in need because he feels like it’s a way to atone for the sins he committed in the war. 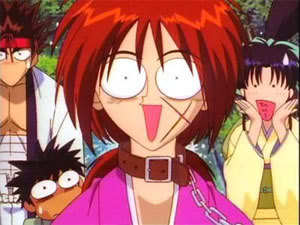 Along his wandering Kenshin comes across multiple people, and he never wants to settle down to try to find happiness because he feels like he doesn’t deserve it. But one day Kenshin finds himself settled with the same group of people day by day and he ends up caring for them. People who each have their own goals and reasons for wanting to be stronger. Kenshin, without realizing it at first, becomes the one who shows them their inner strength and potential, and becomes someone they can relate and look up to. Someone they can respect.

[divider type=”space_thin”]
Kenshin’s wandering lifestyle and his life with his new friends takes him on many life-threatening adventures and battles, taking on the baddest of the bad, all the while still using his reverse blade sword. Not wanting to kill even the people who only want to see him in a casket and get paid, he stays true to his morals and doesn’t kill. Hence the other meaning of realest — not following what others are doing and just doing you.

So now what do we have? We have a guy who was once a feared killer (a Manslayer), who’s trying to turn his life around to be the person he really wants to be. All the while helping others and helping them be what they want to be. He was already respected, but as a Manslayer from the war and not as a person. Now he’s respected as the person he really is, and that’s Kenshin Himura.

Let’s move on to his fighting style, which is a mixture of Battōjutsu and Hiten Mitsurugi-ryū. Battojustsu is a style that used the sheathing and unsheathing of a sword to add more speed and force to a technique than a regular sword swing would. It also gives the user tactical advantages if they can go faster than the human eye can see, which, of course, Kenshin Himura can do.
[divider type=”space_thin”]


[divider type=”space_thin”]
The Hiten Mitsurugi-Ryu is a sword style that was made in order for one person to defeat an entire squad or more singlehandedly with immense power and godlike speed. There are many moves and combos in this sword style but the main goal of the Hiten Misturugi-Ryu is to hit the ultimate move: the Amakakeru Ryū No Hirameki. Yeah, I know it’s a mouthful.
[divider type=”space_thin”]
The ultimate move is compared to being caught by the fangs of a flying dragon. “Even if you avoid the fangs of the flying dragon, the gusting winds strip away freedom of movement and the claws would rip you apart.” This move is the epitome of raw. Basically, Kenshin unsheathes and swings his sword so fast it cuts the air and creates a vacuum, sucking the opponent in for the final finishing blow. He steps extremely close to his opponent while using this move which ultimately puts his life in danger with every use, not to mention the stamina and strength it takes to use it. This move alone adds raw to Kenshin Himura and signifies himself among the elite characters to be dubbed the realest.

Kenshin Himura will go down in history as one of the greatest characters in manga. He’s going down as one of the realest by being respected as himself, not being like all the others, BEING RAW AS HELL, and having a heart of gold. He fights the fights that others aren’t strong enough to handle and stares death in the face with a smile. Kenshin is a character that will have you rooting for him and feeling for him in a way that main characters should, and that’s why Kenshin Himura aka Battousai the Manslayer is one of the realest.