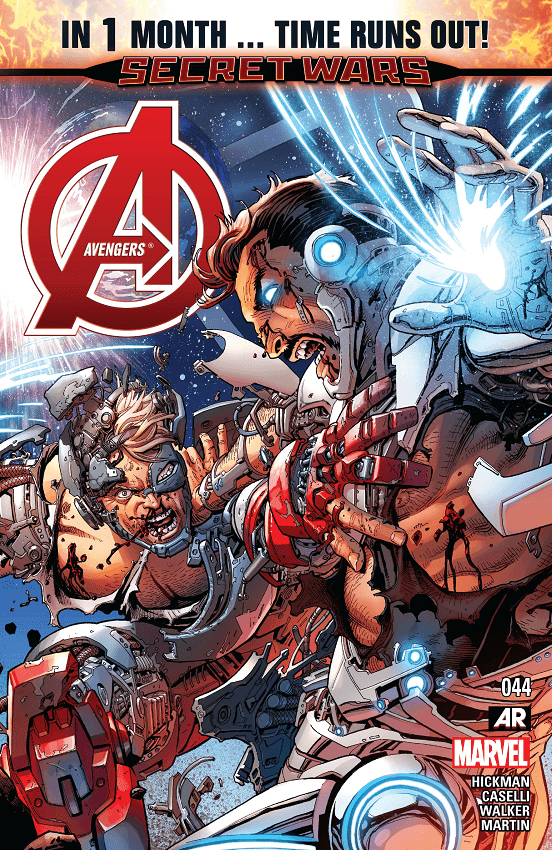 So… this was pretty amazing, right? I mean, yeah, Hickman dealt with the threat from Gladiator and his armada bent on destroying the Earth rather quickly, but it mostly served the purpose of showing that Tony Stark had saved them all, again. In essence, everything after that was just great on so many levels and the most captivating parts of the comic book. This last issue of Avengers was filled to the brim and probably overflowing. After dealing with the threat, three different story lines play out over a few different timelines, all of them leading to basically, the end of the world. There is the ramp up for war from Earth 1610 (the Ultimate Universe) led by Ultimate (and pretty dastardly) Reed Richards and his new buddies, The Cabal. This has all lined up very well for this progression in the story. Grouping all these characters together to destroy the last remaining world is fascinating to watch, especially when Ultimate Nick Fury becomes the wild card in all this. Reed has been in pseudo exile, but has used that time to create weapons that destroy other planets. Pretty much the exact same thing Tony Stark has been doing on Earth 616 after he was let go by the Illuminati.

Speaking of Earth 616, their preparations are much different. Their moral compass points in the other direction and they are in full prep for what happens AFTER their world is destroyed. It’s a little glaring to watch these heroes we’ve been aligned with so long (even if we’re just talking about this run) concede defeat and plan for what happens next. It, of course, makes one feel like there is a shoe that hasn’t dropped yet. Still, their plotting on who will populate the world after the destruction is fascinating because it leads to the biggest issue in this comic…

…the showdown between Steve and Tony. This is just smart. It fits within the narrative that has been building since Steve regained his memory and provides some fan service for the Civil War alums (as the new Avengers movie is about to debut that leads to Civil War, no doubt). Their fight is perfectly spliced with a flashback of Tony and Steve creating the Avengers Wheel together and the dialogue used in the fight and flashblack bleed over to each other, further showing how deep this fissure between them goes. Just two old buddies, fighting at the end of the world. it is masterful and a proper send-off for this book.