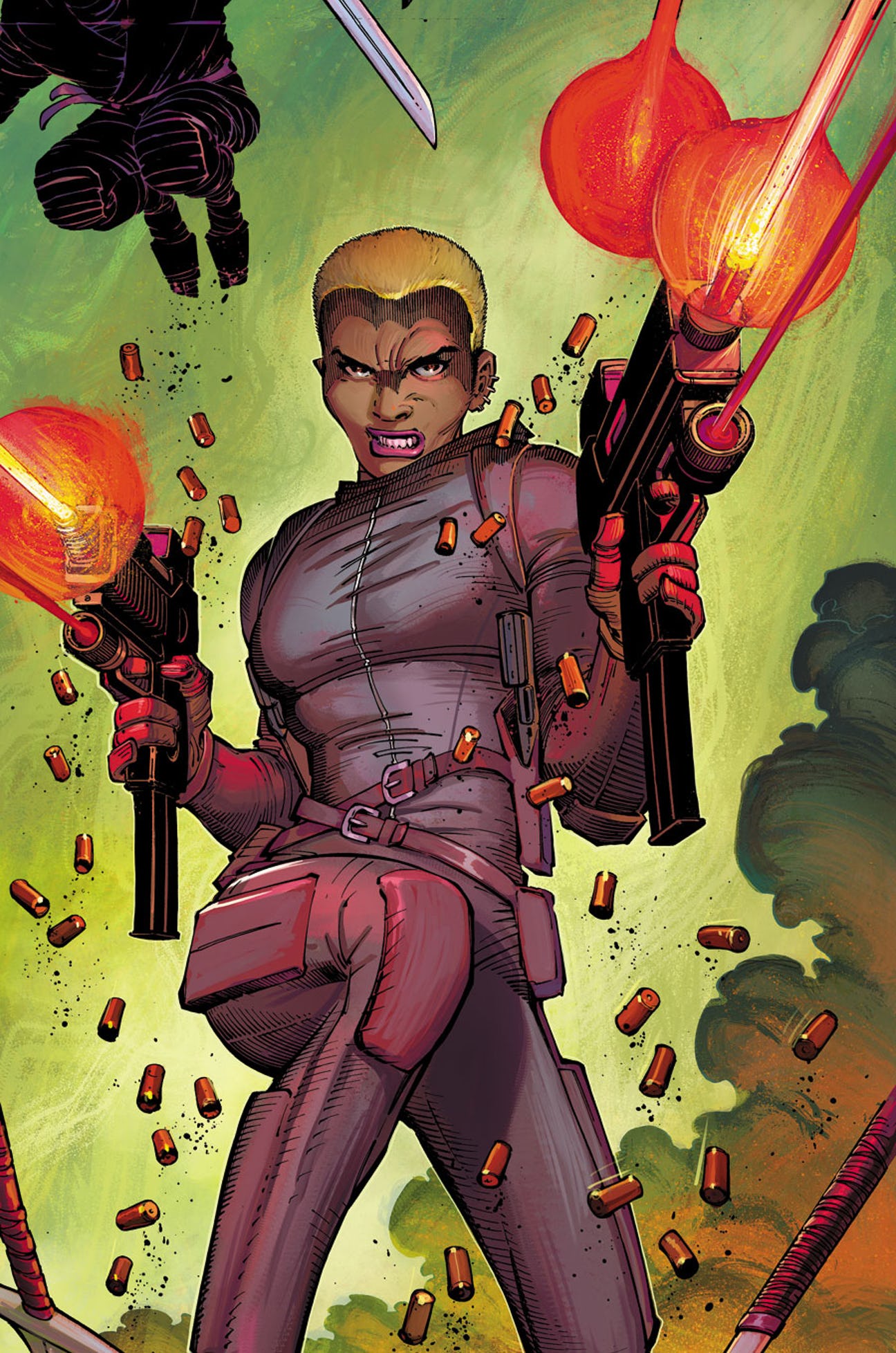 You know a book is good when you lock the door and put a song on in order to fully digest what you’re reading. Listen, I stopped twice while reading The Silencer to let out a “ Bast damn”. Abnett and Romita, Jr. let us know from jump this is a book about Soccer Mom SUVs and body bags.

The premise of the series is simple. Imagine John Wick with a grocery list. We are introduced to Honor Guest (fake alias alert) as a typical mom shopping with her son. Once Honor starts talking about how everyone sees an “ordinary life” as boring or some kinda curse, we know what’s up. Anytime the main character of a series rides hard for mundane day to day things like taxes, coupons, and satellite TV, you know they’re hiding some kind of shady past. That past comes back to collect Honor’s fade in the parking lot in the form of Killbox. 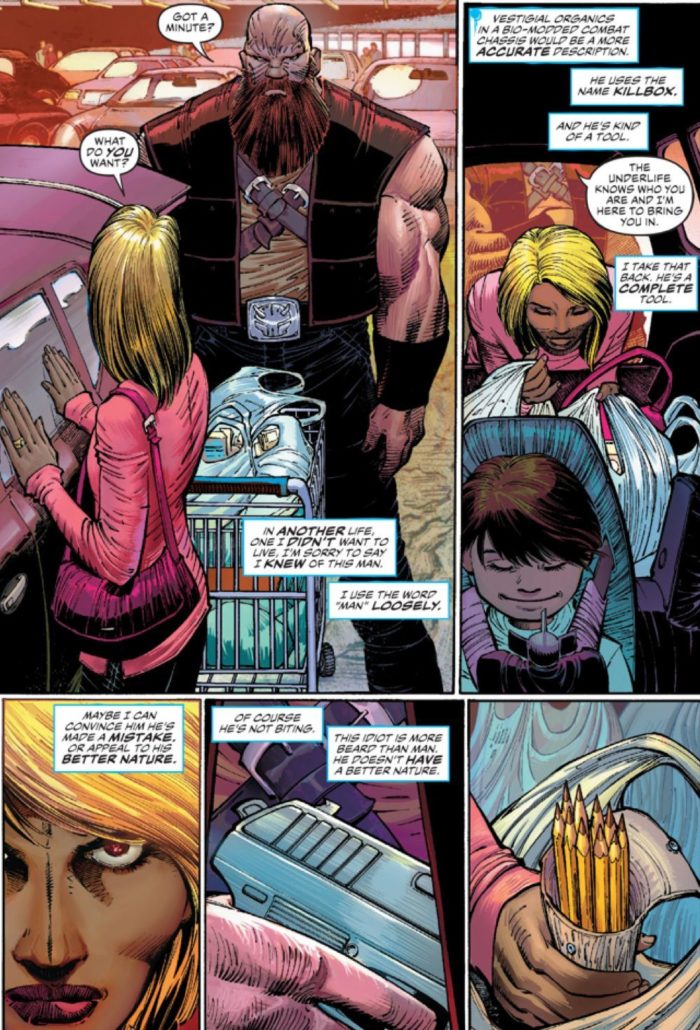 The Myth of The Silencer

Killbox is an “associate” of Honor’s that’s trying to bring her back into a clandestine organization called The Underlife. Yeah, she ain’t with that shit in the least. What happens next is poetry in motion as Honor systematically takes apart Killbox. The fight scene is something gloriously vicious to behold and gives us a lot of information about Honor. Honor’s return home brings this issue full circle as a special guest appearance from a certain character informs us of how connected Honor’s old life is in the DC Universe. I’m not going to say who the guest is. I will say once you see ’em, you know shit is real. Especially the warning that she can’t run from her old life.

Abnett and Romita Jr. are doing a lot of myth for Honor in dialogue. There are some moments that come across as the typical tropes. However, they help move the story along and are never over the top. The best part about The Silencer is that Abnett and Romita, Jr. have a lot of space for world building. We’re seeing new characters appear as real threats for Honor. The less we know about them, the more dangerous they appear which gives our protagonist actual threats at every turn.

I’m here for the casserole and body bags 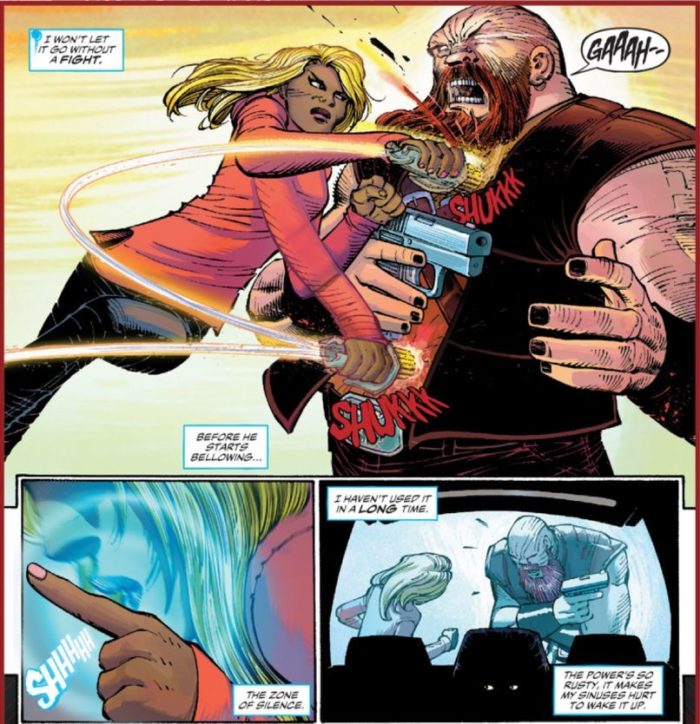 Honor’s fight against Killbox is one of the most beautiful highlights of this issue. John Romita, Jr. can do gritty, realistic fight scenes like nobody’s business. I didn’t notice that Honor stabbed dude twice until I went back for a second read. Romita, Jr. makes her look fast as fuck on page and I’m just like, “how’d he do that shit”? Romita has such a knack for making characters move and bend certain ways for scenes that is so unique. Sandra Hopes’ work on inks brightens the page and makes all the scenes pop. She is able to flawlessly flip between dark and cheery moments easily for the mood in each scene.

My favorite part of this fight scene is Abnett’s inner dialogue for Honor. Inner dialogue can make or break a book for me. Honor talks just enough and doesn’t over-explain the situation to the audience. The inner dialogue sounds genuine and pulls you into the fight. Plus that Zone of Silence? The way she busts it out is cold as fuck. Period. It reminds me of Donquixote “Corazon” Rosinante’s Calm-Calm devil fruit abilities in One Piece. I’m excited to see the unique ways it can be used as an advantage or disadvantage for Honor.

If The Silencer #1 is running the first lap for DC Comics’ The New Age of Heroes team, then we’re off to a great start. This book is a fun look at the new stories and characters being rolled out. The Silencer is back for the first time and got people out here shook.

8.4 Crayola Colored Pencils out of 10